Pseudo-President Biden gave his first teleprompter reading to a joint session of socialists on April 28th – which drew about as much audience and support as the average Biden or Harris campaign rally last year. Nearly none…just a handful of socialists, most of whom are his handlers…

CNN’s “most popular political figure in the 21st century” can’t draw enough real supporters to keep a summer lemonade stand in business. Even most of his democratic socialists decided to skip the event and catch a rerun of Law and Order at home.

I’d like to report what Joe had to say, but in the end, he didn’t really say anything. Whoever is writing his teleprompter text seems to be intent on making Joe look like a bumbling babbling old fool. 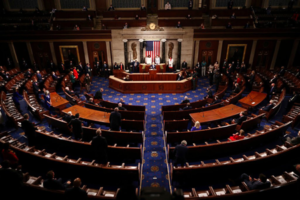 On the upside, Joe’s dementia cocktail seems to be working a little better. At least he seemed to know he was in the congressional chamber and “Dr. Jill” the schoolteacher didn’t have to hold his hand and whisper into his ear what’s on the teleprompter this time.

CNN reports that “7 of 10 who watched were left feeling optimistic.” Of course, only 9 were watching…

Essentially, Joe’s teleprompter reading was full of self-serving platitudes only suited for the most dumbed-down ignoramuses on earth. Nothing he said was true…nothing. But personally, I’m thrilled he refuses to give Trump any credit for his “warp speed” COVID19 response in place long before Biden and Harris stole the 2020 election.

Scientifically speaking there are no COVID19 vaccines and there can’t be for at least another year or two. Acceptable trials can’t be completed for real FDA safety approval for public use until then, in stark contrast to the fake FDA approval that we have today. They have even tried to grant themselves immunity for all deadly results from their so-called “vaccines.”

Personally, I wish Trump would totally distance himself from the mad dash to “vaccinate every American” with shots that aren’t even vaccines. I’m thrilled democrats continue to take full credit for everything Trump did before they arrived. This means they can take the fall for everything they are taking credit for doing to Americans.

Joe’s speechwriters did get one thing right, although they demonstrated a mental malfunction in the process and struck an almost comical contradiction in alternate realities when Joe read the words – “We the people are the government!”

Joe the puppet has been performing like a world class 3rd world dictator via his plethora of unilateral unlawful and unconstitutional Executive Orders since the moment he stole the Oval Office from Trump. Makes one wonder which “we the people” he’s talking about, when suggesting “we the people are the government.” I suspect he meant to say, “I, the pseudo-dictator, is the government.”

None the less, Joe was vertical. That alone was an achievement for the mindless old fool. Thank God Joe and Kamala aren’t actually running anything. Obama & Co. (the puppet masters) are clearly in charge and equally clear…is their intent to put Joe in a position of having to step down soon, moving cackling Kamala into Obama’s pseudo-presidency.

There are over 331M people in the USA today, according to the 2020 Census. Almost none of them tuned in to watch the latest comic relief from Uncle Joe the lifelong perv.

Did you watch it? I didn’t…and neither did anyone else!

The State of the Union is…SCREWED!