O give thanks unto the LORD, for He is good: for His mercy endureth forever.  Psalms 107:1

To the end that my glory may sing praise to thee, and not be silent. O LORD my God, I will give thanks unto thee forever.  Psalms 30:12

From the Mt. Vernon website comes the truth of Thanksgiving.

Americans don’t know it and children aren’t taught it, but George Washington is responsible for our Thanksgiving holiday. It was our first president, not the Pilgrims and not Abraham Lincoln, who led the charge to make this day of thanks a truly national event. 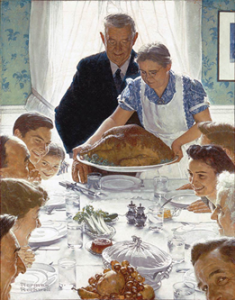 On October 3, 1789, George Washington issued his Thanksgiving proclamation, designating for “the People of the United States a day of public thanks-giving” to be held on “Thursday the 26th day of November,” 1789, marking the first national celebration of a holiday that has become commonplace in today’s households.

It was President Franklin Roosevelt who wanted to extend Christmas shopping by another week and change Thanksgiving to the third Thursday of November, but the public outcry was massive.  So, in 1941, Congress named the fourth Thursday in November as our national day of thanks.  Norman Rockwell painted this holiday as “freedom from want.”

On Monday, White House Press Secretary, Sarah Huckabee Sanders made reporters tell what they are thankful for before asking her a question.  All but one of them actually told what they were thankful for, and she pulled it off brilliantly.

Then they turned around and tweeted their disgust with her.  Sad, but this is the state of America’s media and culture today.  We need to stand for our Christian heritage, just as Sarah did.

The Hatred of Christendom

My sweet Christian friend, Shirley Edwards, had a recent article in NewsWithViews that was heartbreaking.  Shirley lives in the UK, and writes about what is going on across the pond.  Her latest article, The Crucifixion of Truth in The United Kingdom, gave several examples of the bias against Christians and how the foundations of the British way of life have been sacrificed causing them to lose their own identity.

The case of Joshua Sutcliffe, a Christian math teacher at a school in Oxfordshire is facing discipline for calling a female student a ‘girl’ when they wanted to be called a boy.  The school has accused Joshua of ‘mis-gendering’ the pupil contravening the school’s equality policy.

Felix Ngole, expelled from his course at Sheffield University for stating his Christian views on marriage and sexual ethics on Facebook. It is thought his views could have offended someone.

Sarah Kuteh a Christian nurse fired by the National Health Service (NHS) for talking to patients about her faith while she was helping them get ready for surgery.

Richard Page, a magistrate who has been disciplined by a Cabinet minister and England’s highest judge for saying that he thought a child’s best interests lie in being raised by a mother and a father.

Barry Trayhorn, a Pentecostal minister forced to resign after a complaint was made about a bible verse he quoted at a prison chapel service.

(These cases are being defended by Christian lawyers).

Shirley goes on to say that, “public services such as local councils who once served the community have now changed into law enforcers; it may be possible that the senior leaders of those organizations have partaken in common purpose training, and disseminated that work ethos down through the organization and out into society.”

And guess what “common purpose training” (CP) is…it’s a political charity using behavioral modification.  The link exposes CP for what it is…an elitist pro-EU political organization helping to replace democracy in the UK, and worldwide, with CP chosen ‘elite’ leaders. In truth, their hidden networks and political objectives are undermining and destroying our democratic society and are threatening ‘free will’ in adults, teenagers and children. Their work is funded by public money and big business, including international banks.

We’ve all heard about “behavioral modification” for years in America.  It has been used for years in the government schools rather than academic teaching.  Any researcher regarding education knows those buzzwords well.

A TIME Magazine article from June of 2016 entitled, Regular Christians Are No Longer Welcome in American Culture, exposes the same anti-God tactics as are being used in the UK. The faithful are paying the prices for their beliefs, not just with bakers who refuse to bake cakes for homosexuals, but far more insidious, as if that wasn’t bad enough.

A teacher in New Jersey was suspended for giving a student a Bible.  (If you haven’t seen, God’s Not Dead II, get it and watch because this is what is happening).

A football coach in Washington was placed on leave for saying a prayer on the field at the end of a game, but it’s just fine if the NFL kneels in disrespect to our flag, our national anthem and our veterans.

A fire chief in Atlanta was fired for self-publishing a book defending Christian moral teaching, something he did outside of his employment, but was still fired for it despite his first amendment rights.

And remember the female Marine who was court-martialed for pasting a Bible verse above her desk.

Anti-Christian activists hurl smears like “bigot” and “hater” at Americans who hold traditional beliefs about marriage and accuse anti-abortion Christians of waging a supposed “war on women.”  Meanwhile the making of money off the sales of aborted babies’ bodies goes on and only because of Trump does this practice have a chance of being stopped.

TIME tells that even Christian institutions face pressure to conform to secularist ideology—or else. Evangelical schools like Gordon College in Massachusetts and Kings College in New York have had their accreditation questioned.

The secularists and haters of Christ argue that Christian schools should not even exist and home-schooled children have been targeted because it’s a “Christian thing,” and it is child abuse!  My God that’s backward, what is going on in our government schools is the real child abuse.  Even Christian charities, adoption agencies, Catholic hospitals, and crisis pregnancy centers have become objects of attack.

The father of our country, George Washington, along with Virginian Robert E. Lee’s portraits were recently removed from Washington’s own church in Virginia.  Both of these men were of great faith, and both made huge sacrifices for freedom and liberty.

In everything give thanks, for this is the will of God, I Thessalonians 5:18.  Despite the attacks on both Jews and Christians because of faith in the God of Abraham, Isaac, and Jacob, and the attacks on Christendom and our Messiah, the King of Glory, Jesus Christ, we need to thank God for our many blessings.

Like Sarah Sanders, I will list the many reason that I am so grateful to the Lord.  I was raised in Chicago, and got the best of the City in the 1950s, and I had a great education.  My summers and vacations were spent on my grandparents’ dairy farm in northern Indiana.  We had wonderful family gatherings, blessing and memories I will never forget.  I am married to a wonderful well-adjusted Christian man, who loves me unconditionally and even helps me clean house!  I can see, hear, taste, smell and touch. I can still kneel to wipe up my floors, and I can walk my beloved dogs.

Our great country has problems, but we’ve been blessed to see a new President in our White House who wants to make our country great again.  We are blessed for so many things, our wonderful veterans and active military, for our friends and families, for our warm homes in the winter, and cool homes in the summer, for food on the table, for jobs that pay the bills, and for countless many other things that would take pages to mention. 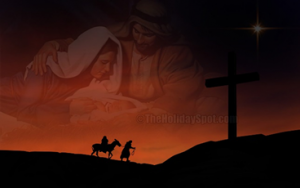 I remember attending church on Thanksgiving while gram’s turkey was in the oven and all of the family gathered together in church to thank the Lord for our blessings.  Oh, for the preachers of the past who spoke the truth so willingly and lovingly.  We need to be in prayer for our country, our President, his family, and his administration, and we need desperately, more than anything else…to stand for our faith in God!

Today we start the season of Christmas.  It’s Christ’s birthday that we celebrate next. All of our blessings come from God, so praise and thank Him, and stand for His truth in American society today.  Lord bless you all!

P.S.  We are so thankful for so many blessings, including the fact that we have NewsWithViews who daily publishes truth from researchers who love our country and want to make her great again.  The NWVs CEO and publisher works tirelessly to bring the best articles by journalist researchers into your email daily.  We stay alive only because of donations from grateful readers.  Please consider donating to NWVs on a monthly basis to help us make America great again.