“The Justice Department refers only to an unidentified 2016 presidential candidate, but campaign finance records make clear that the candidate was Clinton,” according to Josh Spiegel, a police and security consultant in Washington, D.C. “The dates of the illegal campaign contributions strongly suggest that Nader’s past Democratic Party ties will show he helped Hillary Clinton and not Donald Trump,” Spiegel claims. 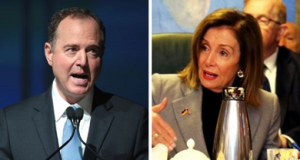 According to the indictment, from March 2016 through January 2017, Khawaja conspired with Nader to conceal the source of more than $3.5 million in campaign contributions, directed to political committees associated with a candidate for President of the United States in the 2016 election.

By design, these contributions appeared to be in the names of Khawaja, his wife, and his company. In reality, they allegedly were funded by Nader. Khawaja and Nader allegedly made these contributions in an effort to gain influence with high-level political figures, including the candidate. As Khawaja and Nader arranged these payments, Nader allegedly reported to an official from a foreign government about his efforts to gain influence.

The indictment also alleges that, from March 2016 through 2018, Khawaja conspired with Boulos, Dekermenjian, Diab, El-Saadi, Hill, and

The indictment further alleges that, from June 2019 through July 2019, Khawaja obstructed a grand jury investigation of this matter in the District of Columbia. Knowing that a witness had been called to testify before the grand jury, Khawaja allegedly provided that witness with false information about Nader and his connection to Khawaja’s company. Boulos, Diab, Hill, and Whipple also are charged with obstructing the grand jury’s investigation by lying to the FBI.

Currently, Nader is in federal custody since he admitted possessing child pornography depicting infants or toddlers in sexual poses.

The pornography charge requires Nader to serve a 10-year minimum prison sentence. The prosecution team agreed as part of Nader’s bargain to recommend a 10-year sentence when Nader is sentenced in April 2020. However, the presiding judge is allowed to impose a significantly longer sentence if she chooses based on the severity of the treatment of the children by Nader.