No Iranian Dog in Muslim Fight

Islam, with its barbaric exclusionary and primitive Bedouin Arab dogma, overtook Iran in the 7th century and brutally strove to replace the traditional lofty Iranian beliefs in human rights and diversity. Regrettably, the forced subjugation of the Iranian people succeeded to some degree in transmitting the Islamic psychosocial virus to many Iranians—the virus that transforms the person into a bigot who sees only his way and his belief as the right way and the only right mandate. Any and all people who do not see things “his” way are wrong and must be reformed by whatever means, necessary, including eradication, if the bigot sees fit. 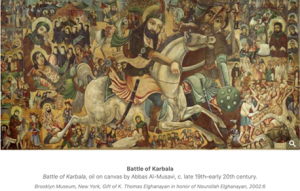 I hold Islam in violation of the sacred charter of Cyrus the Great by invading other lands, enslaving people, destroying their heritage and their way of life. I find Islam guilty of pursuing a multi-front attack, even to this day, on much of what is sacred to all civilized people. I consider Islam responsible for 1400 years of atrocities committed against my people. The litany of Islam’s wrong-doings is beyond the scope of this writing. Just look around you in the world and see the horrific things that true Muslims are doing, not only to the people they label infidel, but to their own various sects, under the misogynist, discriminatory banner of their belief.

It is constructive to note how Islamists engage others in discussion. When they don’t like what they hear, they resort to ridicule, accusations and name-calling. Wouldn’t it be wonderful if these people would, for once, abandon their primitive mindset and use a civilized method of dialogue?

1 – Muhammad died and did not leave a written will (he was illiterate, that’s understandable). So, his high-ranking disciples began scheming for leadership. The Shi’as claim that Muhammad verbally indicated that Ali was to lead his Ummah. Well, 90% of Muslims say, no he did not and the Caliphate system was the way to go.

2 – Shortly after Muhammad’s death, Ali was killed by some disgruntled Muslim, by the name of Abdur Rahman bin Muljam. And just when Ali lifted his head from the ground during the prayer, ibn Muljam struck the fatal blow at his forehead with such deadly force that it split open. Blood squirted from Ali’s forehead in several jets, and he exclaimed: “By the Lord of the Kaaba, I am successful!”

Why Ali ibn Abi Talib, prophet Muhammad’s cousin and son-in-law and his personal executioner was murdered was none of our business. There was some personal vendetta between two Arab terrorists. During the 7th century Arabia violence ruled supreme. Everybody killed everybody for revenge and power.

3 – Then there was a battle between Yazid’s forces and Hussein. Wasn’t there? Hussein and his band of relatives-followers got butchered. Well, friends, that is the nature of the beast called war.

4 – To this day, Shia’s bloody themselves, their children, even their babies with self-flagellation in a most horrid way in aza dari (mourning) for what happened to Hussein. What good does this do, other than perpetuate a sense of defeatism and fanaticism that mitigates against Iranians freeing themselves from the yoke of the conniving mullahs?

Your cause is ill-served by your methods. While you are at it, please do not curse me and accuse me of being in the pay of this and that. I am only paid by my conscience and the love I have for my motherland Iran and non-fanatic Iranians.

The long-suffering Iranian people must put the past behind them (as most of them have) and use their excellent talents to not only join the advanced world, but lead it. What a shame to remain stuck in this horrid mentality of victimization. Iranians deserve better than being manipulated by a bunch of mullahs who have been having a great ride on the back of the ignorant poor. 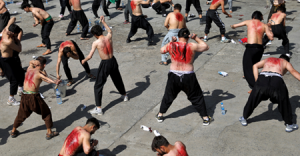 Forget the afterlife and pay attention to the plight of the suffering masses. Stop playing politics with the life of the people. Those responsible for this sham have no heart and no shame. Let the bad bygones be bygones and use the marvelous human potential of Iranians to provide them with the opportunities to better themselves and their families.

The most important step in the direction of emancipation of our people is the establishment of the rule of law — not the barbaric sharia law — to grant all Iranians, male and female, young and old, of all beliefs equal rights.

Let’s keep in mind that Iranians have no dog in this long-dead Islamic fight. Let’s look forward and do something about the sorry plight of our people today so that future generations recall these current day Iranian trailblazers who had the courage to break from the bleak past and launch a bright future.

I cannot say with certainty. But, I have a gut feeling that Trump’s overture is poison to Iran’s aspiration to end the mullah’s regime which is about to collapse under the present pressures. I hope it is not another American rope thrown to rescue the mullahs.

Is Trump going to give the mullahs a new lease on their criminal life in exchange for the concessions he thinks he is going to get, just trusting their words? Trump today in an interview said that if he is reelected, he will make a deal with these mass murderers.

In any event. It is unrealistic and somewhat suicidal to rely on other people batting for you and at their own expense.

See, politicians are not do-gooder Boy Scouts. By their very trade, they do whatever benefits them. It is foolish to believe that politicians are out there strictly to serve the good, whatever that may be. It is prudent to keep in mind that the society produces politicians by the truckloads and statements, such as Lincoln and Washington, with great rarity.

In short, former President Obama picked the Mullahs over the Iranian people during the Green Revolution of 2009. The Trump administration must do the opposite and support proud Iranian people.