America has become a place of mysterious mass shootings, (Las Vegas), daytime assassinations without any motive (Seth Rich), and the latest murder of Philip Haney that was ruled as a suicide.

The FBI closed the Los Vegas shooting investigation as a mystery. The DNC staffer, Seth Rich’s death ruled out as a robbery. One of the founders of the Department of Homeland Security (DHS) and whistleblower during the Obama era, Philip Haney was found dead and appeared to have suffered a single, gunshot wound. Officials immediately ruled out his death as a self-inflicted gunshot wound without investigation.

According to the Amador County Sheriff, “Mr. Haney was located in a park and ride open area immediately adjacent to State Highway 16 near State Highway 124. Highway 16 is a busy state highway and used as a main travel route to and from Sacramento. The location is less than 3 miles from where he was living.”

I had known Philip for a long time, but we were never close friends. However, I often received e-mails from him, praising me for doing basically what he was doing. A week or two before his death he sent me a large manuscript, asked me to review it and give him my thoughts about it.

Philip was an extraordinary individual. He had dedicated his entire life to keep America safe. He was brilliant in his own area of expertise. He never seemed to get tired of what he passionately loved to do: protecting our American mainland from the threat of Islamic terrorism. Those of us, like Philip, who are glued to our work felt his own premonition that his work would eventually lead to his death.

“Rep. Louie Gohmert, R-Texas, has repeated his claim that the Obama administration officials may have been involved in a plot to kill Philip Haney, an anti-Muslim activist whose death in February has spawned conspiracy theories among right-wing activists and media outlets.”

“In June 2016, Haney testified before the Senate Judiciary Committee, where he alleged that the Obama-era DHS had ordered him to delete hundreds of files about reputed associates of Islamic terrorist groups. Haney made the case that several attacks in the U.S. could have been prevented if some of the files had not been deleted, the Examiner reported. 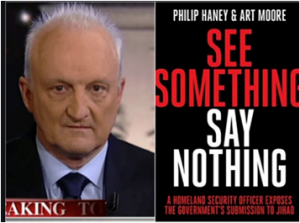 Philip who felt he was betrayed by the Obama administration wrote a stellar book called See Something, Say Nothing. Everyone including myself who knew him, agree that he never committed suicide. He had no reason to. He was very much pre-occupied with his work. Well, if Philip did not kill himself, obviously, someone did. Someone who believed Philip’s magnificent work was a threat to Islam’s expansionistic ideology in America.

Well, let the facts speak for the themselves.

Have you ever asked yourself why Barack Hussein Obama began his presidency by shocking America with his grandiose trip of apology and appeasement to ‘the Muslim world’? Did you ever ask yourself where on earth he derived the notion that America is ‘one of the largest Muslim countries  in the world’? How in the world did he come up with the notion that Islam has been part of America since its foundation? Or, why Obama instructed his CIA Director nominee, John Brennan to henceforth refer to Jerusalem, the capital of Israel for millennia “Al Quds”- the Arabic Muslim name for the city?

“EEOC awards Muslim truckers $240k after being fired for refusing to haul alcohol.”

“The Obama administration’s Equal Employment Opportunity Commission sued a trucking company, at taxpayer expense, when two Somali Muslim truck drivers were fired for refusing to haul alcohol. Doing so, the Islamists claimed, would infringe on their religious beliefs under “Islamic law.”

Since when does Islamic law trump the U.S. Constitution and U.S. federal law? For Obama, such violations of his oath began with the first breath he took after he took his inaugural pledge. In fact, the scofflaw-in-chief gave us a glimpse of his personal religious preferences when, during his “Apology Tour,” he proclaimed to the world that, “The United States is no longer a Christian nation.

By no means, I accuse the former President of any wrong doing. I leave that to you to be the judge.

“American patriots are holding out hope that AG Barr and John Durham will get out the truth and impose accountability on the perpetrators of that piece of the Obama legacy.  But the story of Philip Haney lies at the center of another piece of that legacy that deserves just as much attention, and just as urgently.”

“Awarding the Medal of Freedom to Philip Haney would be richly deserved by Haney, and a clarion signal that attention is now being paid to the need to protect America from Islamization and the ideology of sharia supremacy.”