In the midst of the Democratic Party’s verbal war on American law enforcement officers and their support of radical groups creating havoc in Democrat-run cities and states. On Friday President Donald Trump hosted a meeting with some of the nation’s top cops.

The nation’s largest fraternal organization representing federal, state and local cops, the National Association of Police Organizations (NAPO), represents more than 500,000 police officers from groups such as the New York Police Benevolent Association (PBA), the Fraternal Order of Police, and other organizations.

Below is the first part of the transcript for Trump’s Q & A (questions and answers). To read the full transcript: 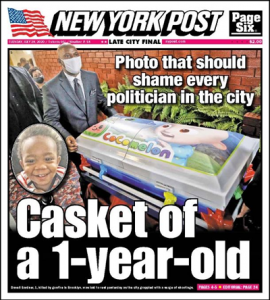 THE PRESIDENT: I’m pleased to welcome the leaders and friends of mine, in many cases, of the National Association of Police Organizations. We have some of the great, great police representatives in the country here. Maybe the best, I would say, Pat. What do you think?

THE PRESIDENT: Representing more than 240,000 of our nation’s courageous police officers.

I want to thank the Association president, a friend of mine, Mick McHale —

THE PRESIDENT: — Mick McHale, who was — has been tremendous, who I call on occasionally to say, “What the hell is happening” in a certain location. And he gives me the advice. And I was very honored to receive the endorsement. That was a great endorsement, and we very much appreciate it, Mick.

The entire leadership team is here today representing large portions. What would you say the percentage of police in the country are represented in this room? A big portion?

THE PRESIDENT: We have a big — a very big portion. And I appreciate it.

Also, I want to thank our Vice President, Mike Pence. He’s been very involved in a lot of issues. But this issue is one of his very important ones, I think we can say, Mike. Right? 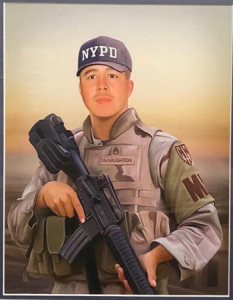 THE PRESIDENT: We’re here to discuss the unwavering support of our nation’s courageous police officers and our determination to defend the safety of all Americans. I just spoke on Portland. I just spoke with Chad Wolf, who’s doing a fantastic job at Homeland. And the courthouse is totally secure; it has been, ever since we’ve been there. We had to move in about a week and a half ago because they were going to take down the federal courthouse. This is not even believable. You know, you tell these stories, and it’s not even believable.

Homeland Security moved a team of very talented people — strong, tough people. And the courthouse has been in very good shape. They’re not an offensive team; they’re a defensive team. They’re not allowed to be offensive, unfortunately. And you had radical anarchists. You had horrible people. You had agitators. They weren’t protesters. They might have been protesters, but the ones that were the problem were absolute anarchists and, in many cases, professionals.

So a lot of people have been arrested, and we’ve told — we’ve told the mayor and the we told the governor, “You better get in there and do your thing.” And they finally, after — they should have done this 60 days ago. A lot of people have been hurt. A lot of law enforcement people have been hurt. And they should’ve done this 60 days ago. So now they freed up the park, cleaned out the park, and they’re moving their way. And if they have any other problems, we’re going to take very strong offensive force. 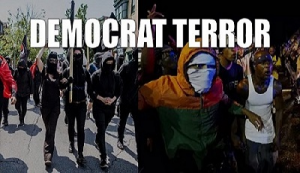 In recent weeks, law enforcement has become the target of a dangerous assault by the radical left. The leftwing extremists have spread mayhem throughout the streets of different cities, in particular, Portland. If you look, Portland is one. Seattle, really, would be another.

And we were getting ready to go into Seattle. We would have solved that problem very quickly. When they heard that we were going in, they went in. And by that time, the anarchists were exhausted and they just raised their hand. They were exhausted and tired, and they had a lot of drugs and a lot of alcohol, and they just gave up. They just raised their hands. They were sleeping there long enough. They took over, actually, a piece of Seattle, if you can believe that — Seattle being a major city. And they took over a piece.

Joe Biden has pledged to cut police funding — and you do know about that, Mick, I assume. Right?

This guy has been dragged so far left. Biden has been taken further left than Bernie ever was. Bernie was never this. I mean, totally open borders, and the sanctuary city stuff that — he’s approving things that Bernie never thought of. It was supposed to be, they were going to take him right. They took Biden way left of where Bernie was because they have the manifesto. I don’t know, have you seen the manifesto they’ve got?

THE PRESIDENT: Now I understand they can’t get any police in Milwaukee because you’re not allowed to use pepper spray or tear gas because — if you have crowds. But I don’t think there’s any other way other than obvious way, which would be horrible. And that’s shooting itself, which would be horrible. But I don’t know how you can control a crowd if the crowd if — if that crowd is anything like what you have at Portland, there’s no way you could possibly do it without tear gas and pepper spray.

Pat, would you say that’s a correct statement?

THE PRESIDENT: It’s pretty amazing, right? So you have no police that want to go to Portland because they know they can’t do their job. You have to give them the equipment to do their job. It’s incredible. They’re not going to go to Milwaukee.

So what’s going to happen in Milwaukee, Mick? What do you think?

Again, they’re going each and every day under attack, but they — they raise their hand, they took an oath, and they’re not going to give up. And it’s your message, but it’s your administration. The Attorney General has been to many of our cities, many of our functions, and he delivers the same message — and it’s always from you, sir — “We got your back.” That’s the most important aspect we could ever seek in our profession, to know somebody has our back.

THE PRESIDENT: But what do you do —

MR. MCHALE: In the military, they say “covering your six.”

MR. MCHALE: Sir, you’re covering our six, and we thank you.

THE PRESIDENT: I am covering you. But what do you do when you have a radical-left, crazy mayor, and they’re giving you orders that you know will lead to tremendous death and crime? Are you allowed to do your job or are you going to have to listen to this crazy man that got appointed? Is there something you can do? Because I’ll tell you, if you don’t do your job, you going to have certain cities in this country that are going to end up like Portland.

THE PRESIDENT: The mayor goes into the crowd the other night — and I watched very carefully, and I saw exactly what happened. He was excoriated. He was — they went after him. It was incredible, right?

THE PRESIDENT: And shouting at him, “Resign. Get out of here. We don’t want you.” Horrible.

And yet I watched on NBC News, Lester Holt — on your news, Peter — if you watch that news, that newscast, it was no — it was a big, beautiful thing that he went in with the people. They didn’t show the shouting and the “Get out of here.” And they were rough. They would have ripped them apart. Peter, he had five bodyguards. Five bodyguards. If he didn’t have those bodyguards, you’d be talking about a funeral right now, because they were looking to do a bad thing on him. And he got out with his life.

And yet, I watched NBC — I was watching, for some reason, NBC Nightly News — not even MSDNC. I’m watching “NBC Nightly News,” and if you watched that, it looked like he was a man of the people — the mayor. They would’ve ripped him apart. It just shows you, you know, you need some help from the media. You need a little fair help.