Calls to ban Muslims from entering the U.S. are offensive and unconstitutional.  —Mike Pence – 8 Dec 2015 Twitter

During Mike Pence’s six terms in Congress, he became very good friends with Jeff Flake and Paul Ryan.  But why did Pence invite “Gang of Eight” Senator Flake, who is retiring at the end of his term, and other pro-amnesty Senators to meet with President Donald Trump on 9 January 18.  Talk about inviting the fox into the hen house!  Other Gang of Eight members in attendance were Senators Lindsey Graham, Chuck Schumer, Dick Durbin, Robert Menendez, and Michael Bennett.  (In 2010, Dick Durbin advocated ending chain migration, but now he says the very term insinuates racism.)

As Senator, Flake embraced the amnesty cause and became a charter member of the disastrous 2013 “Gang of Eight” amnesty group. Led by Democratic Sen. Chuck Schumer, the gang’s amnesty bill helped the Democrats lose nine seats in the 2014 midterm elections, and allowed Trump to win the 2016 primary race. 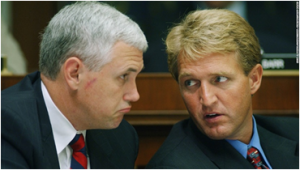 In the recent White House bi-partisan immigration meeting with Trump, Pence declined to support Trump’s plan to change the law so that immigration rules help Americans, and he instead touted a quick amnesty for ‘DACA’ illegals.  It’s obvious that VP Pence sides with his pro-immigration buddies Flake and Ryan rather than with his boss, President Trump.

Flake is a longtime supporter of improving ties to Cuba’s communist dictatorship and has defended the Castro regime.  John Binder of Breitbart stated, “Flake has advocated for opening up relations with Cuba’s communist regime and was a vocal supporter of Barack Obama’s ‘Cuban thaw’ that involved the opening of diplomatic channels, the lifting of travel restrictions, increased levels of trade, and the reopening of embassies in Washington and Havana.”

Flake met with Cuban Communist leaders early this month regarding a sonic attack on the American Embassy in Cuba last August.  Flake claimed there was no evidence of Cuban attacks, but the attack triggered another diplomatic incident between both countries and led to Secretary of State Rex Tillerson withdrawing all non-emergency personnel after dozens of workers reported cases of hearing loss, headaches, concussion-like symptoms, and brain damage.

Senator Flake has made it clear in posts on Twitter and in speeches that not only is the Republican establishment negotiating against Trump’s popular immigration agenda, but they are unwilling to even fully fund the southern border wall the president promised voters.

Jeff Flake and other pro-amnesty Senators were there by invitation to urge the administration to cave to the big business lobby, which wants an expansive amnesty in which DACA illegal aliens are given work permits so that wages can be kept stagnant, rather than rising for Americans.  All these pro-immigration Senators were brought into DACA discussions with Trump by Vice President Mike Pence, an ally of the pro-mass immigration, and pro-Constitutional Convention GOP mega-donors, the Koch brothers.  More on Pence and the Kochs in another article. 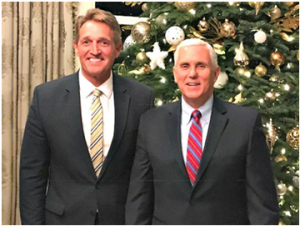 Also, White House Legislative Director Marc Short has taken a prominent role in DACA discussions, and he is another ally of Pence.  Short is the former Chief of Staff for moderate Senator Kay Bailey Hutchison.

As Breitbart News reported, Short has a long history of opposing Trump’s “America First” immigration agenda, working alongside the Koch brothers and Pence before taking a job in the administration.

In 1988 and 1990, Pence ran for Congress against Democratic incumbent Phil Sharp, but lost both times.  During the second race, Pence used political donations to pay the mortgage on his house, his personal credit card bill, groceries, golf tournament fees and car payments for his wife. While the spending was not illegal at the time, it reportedly undermined his campaign, and well it should have.

Mike Pence was elected to Congress in 2000, succeeding David McIntosh’s one term from the 2nd district of Indiana.  Pence served 12 years and then ran for Governor of Indiana.  McIntosh is now the head of pro-amnesty Club for Growth, who was staunchly against Trump, and avidly worked against him in the Iowa caucus.  While in Congress, McIntosh voted “Yes” on more immigrant visas.

Pence’s record shows that he would do much more than support a mere amnesty. In 2006, Pence used a Wall Street Journal article to tout very different legislation which would allow employers to hire an unlimited number of cheap and temporary foreign workers instead of middle-class American voters.

The Congressman unveiled an immigration plan (which he described as “No Amnesty Immigration reform”) that would include increased border security, followed by strict enforcement of laws against hiring illegal aliens, and a guest worker program.

This guest worker program would have required participants to apply from their home country to government-approved job placement agencies that match workers with employers who cannot find Americans for the job. Link The plan received support from neo-cons such as pro-amnesty former Congressman and Freedom Works founder Dick Armey. Link  However, it attracted criticism from conservatives such as Phyllis Schlafly and Pat Buchanan, who viewed Pence as lending “his conservative prestige to a form of liberal amnesty.” They were right!

And Pence is still doing it by inviting his good friend Senator Jeff Flake of Arizona and other pro-amnesty Senators to President Trump’s 9 January 18 meeting.  While in Congress, Pence supported proposals to allow illegal aliens to gain legal status, even while denying that such policies amount to amnesty. During the 2007 debate on amnesty legislation, Pence originated the pointless idea of requiring illegal aliens to leave the country and then being permitted to return legally – an idea that Donald Trump flirted with during the course of his presidential campaign.

During his congressional tenure, he thankfully voted against the DREAM Act amnesty which would grant the undocumented children of illegal immigrants conditional non-immigrant status if they met certain requirements.

Pence and the 14th Amendment

In 2009, Pence partially opposed birthright citizenship (the very misguided principle set forth by the Citizenship Clause of the Fourteenth Amendment to the United States Constitution) that “All persons born or naturalized in the United States, and subject to the jurisdiction thereof, are citizens of the United States and of the State wherein they reside.” Rep. Pence co-sponsored a bill that would have limited citizenship to children born to at least one parent who is a citizen, immigrants living permanently in the U.S. or non-citizens performing active service in the Armed Forces.

Senator Jacob Howard who introduced the 14th Amendment’s citizenship clause, said its grant of citizenship would not include persons born in the United States who are foreigners or aliens.  So, who changed the original intent and meaning?  The anchor baby scam was invented 36 years ago by a liberal zealot, Justice William Brennan, who slipped a footnote into a 1982 Supreme Court opinion announcing that the children born to illegals on U.S. soil are citizens.

Publius Huldah clarifies anchor babies in her short article on the 14th Amendment.  The correct interpretation of the 14th Amendment is that an illegal alien mother is subject to the jurisdiction of her native country, as is her baby.

Longtime senior Pence staffers Mark Paoletta and Daris Meeks are leaving Pence’s office. The announcement was made by chief of staff Nick Ayers in a staff meeting in early January 2018.

Paoletta and Meeks’ departures follow two other top Pence aides who have left the Office of the Vice President: chief of staff Josh Pitcock and press secretary Marc Lotter. The vice president’s staff is considerably smaller than the West Wing, making the departures a more notable shift at the beginning of the new year.

Nothing happens in Washington by accident.  Four Pence aides are fleeing Washington before things they may have been involved with concerning Pence become public and they might even get called to testify if they are still around Washington. 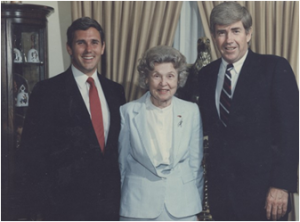 Pence has described himself as an acolyte of neo-conservative, Jack Kemp.  House Speaker Paul Ryan also describes himself as a protégé of Jack Kemp, the man who was Ryan’s mentor.  Congressman Jack Kemp was also the running mate of presidential nominee, Bob Dole.  He also served as Housing Secretary in the administration of President George H. W. Bush from 1989 to 1993.

Kemp was a liberal libertarian, and as such was pro-illegal immigration.  According to a 2013 National Review article by John Fonte, Kemp rejected the argument that border security and enforcement of existing immigration laws should be toughened before a guest-worker program was established, explaining that enforcement-first policy could not be reconciled with “the need for future immigration to meet the demands of a growing economy.”

A recent caller on Rush Limbaugh’s show said, “My kids have dreams too, and we’re sick and tired of paying for the DACA kids.”  He’s right. There is little doubt that opposition to amnesty and support for meaningful immigration enforcement is heavily favored by voters who propelled Trump to the Presidency.

In exchange for a DACA amnesty — against the will of his base of supporters — Trump has said since October 2017 that any deal would have to include three pro-American immigration reforms: An end to chain migration, an end to the Diversity Visa Lottery, and funding for his proposed wall along the U.S.-Mexico border.

The majority of today’s so-called conservatives are Rockefeller Republicans.  They were typically moderate to center-right, vehemently rejected conservatives like Barry Goldwater and his policies, and were often culturally liberal.

Phyllis Schlafly warned that if immigration is not stopped, “We’re not going to be America anymore.” She was right, our entire culture is being destroyed.  Over 50 years ago, Schlafly wrote, A Choice Not an Echo, in which she coined the term “Kingmakers,” or what we call them today, the Establishment.  Kingmakers describe a select group of cosmopolitan elites who control the Republican Party and have historically determined the Party’s presidential nominee.  But this time they lost, and they lost handily because of grassroots Americans.

It is up to those of us who voted for Donald Trump to keep up the fight, to elect true conservatives, to vote in every primary and to constantly let Kingmaker Republicans know we are angry that they are negotiating against Trump’s popular immigration agenda.

You can write to the President at the above address or visit whitehouse.gov to send a message to the White House.

At the beginning of this new year, I’d like to thank everyone who helps NewsWithViews with their monthly donations.  The website exists because of one man’s love for his country, and because of your financial help.  Please continue to support us throughout the year, and don’t forget to tell others to sign up for E-Mail Alerts on the website to receive NWVs daily articles in their inbox every morning.  The sign up is on the top right side of each article. Please keep us strong by donating here.