Problems Not Getting Addressed Much Less Solved

There are still serious issues getting zero attention by state legislators or very little and the same goes for CON-gress as well as more tragedy for our fellow Americans.

Long time readers know I was the catalyst in filing a legal motion against the Texas PUC (Public Utility Commission) in an effort to stop installation of those dangerous ‘smart’ meters on every home, apartment building, business and hospitals here in Texas. It was through this effort I met the most wonderful woman, Thelma Taromina, who became a close friend. A true warrior who sadly passed away from cancer on April 6, 2015. Another dear friend, Tommy Cryer, was our first attorney. Sadly, he passed away June 4, 2012.

We fought, as many were in states like Illinois, California, Maine and Florida. Our state legislatures drown in special interest money just like the prostitutes in CON-gress; the energy companies pour massive amounts into campaign coffers. Tens and tens and tens of thousands of dollars later (all donations from citizens here in Texas), we were beat down by the appeals court in Austin. There was no more money to go to the Texas Supreme Court and why bother? Just like my Seventeenth Amendment lawsuit, the fix was in while 95% of our state legislature sat on their fat asses and did nothing.

Then it was up to me to try and find a law firm that would file a RICO against the energy companies here in Texas; we had those energy corporations nailed with a paper trail a mile long. Fat chance. Of 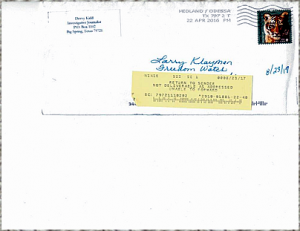 the 32 I wrote, 29 had ‘conflict of interest’ due to their representation in some way with one of the energy companies or affiliates. The rest never responded. I then sent off a letter to Larry Klayman and never heard back. He knows me, not well, but I was surprised when I received no response.

Well, you’ll love this one about our U.S. Postal Service. I mailed the letter as you can see on the envelope, April 22, 2016. It was returned to me as undeliverable on August 23, 2017. The address was correct. 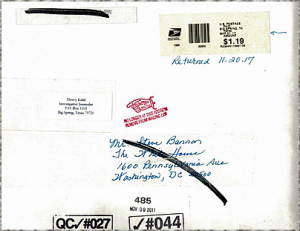 In 2016, the U.S. Post Office lost a whopping 14 pieces of mail I sent certified; that’s about $6.50- $7.00 each. Do you know the ONLY mail guaranteed for delivery is overnight express? That’s right. I paid all that money and tough luck. I had to re-do the contents of all those envelopes and spend the money twice. This has been going on for years with my mail.  I filed a complaint in writing with the Post Office’s Inspector General and got back the usual bird cage lining.

One box I received a few years ago had a big orange sticker across the top: Opened by Homeland Security. That’s right. Under the draconian ‘Patriot Act’. They opened a box addressed to me from Amazon which contained books.

I am not against the U.S. Post Office but it is one of the WORST run businesses in this country. Billions in debt and still CON-gress refuses to bring it into the real world because they’re just as incompetent. And, because employees of the post office have a huge union that votes.

Getting back to ‘smart’ meters, if you don’t know anything about those dangerous meters (likely one on your house or it’s coming), add my columns on this critical subject to your Christmas or winter reading list. Is it any wonder we’re a sick and dying nation? Here in Texas our only victory was a Band Aid. You could ‘opt out’ for a huge fee and a grossly high monthly fee for a meter reader to come out each month. Those ‘smart’ meters decimated one job sector: meter readers.

I believe there are one or possibly two class-action lawsuits I think are still working their way through the system out in California. This battle is still being waged though newspaper rags aka ‘mainstream media’ in states call us ‘fringe’ nut cases. Nothing has changed with those dangerous meters which is one chapter in my book, Taking Politics Out of Solutions.

ALERT: Smart Meters Are Burning Down Homes, & What You Need To Know, August 6, 2017. I raised this issue years ago when houses were badly burnt right after a ‘smart’ meter was installed (in Nevada one homeowner died) – will your insurance company pay for the damages when the energy companies claim it wasn’t their ‘smart’ meter that caused the fire?

This a ‘smart’ meter – short video: “If you have a ‘Smart’ Meter on your home, you may want to pay attention to this story. This Canadian homeowner was shocked to find out he was responsible for $5000 in damages caused by his Smart Meter catching fire. Is this fair? There are so many layers to this story. Please stay tuned for the follow up.”

“Total Chaos” – Cyber Attack Feared As Multiple Cities Hit With Simultaneous Power Grid Failures, April 21, 2017 – Tying everything together under the big ‘smart’ grid is a guaranteed recipe for total disaster.

The blame rests squarely with YOUR incumbent in your state legislature and your governor for allowing those dangerous meters on any building in your state. So, keep voting for an incumbent in the upcoming primaries and nothing will change.

H.R. 2552 to stop taxing seniors social security is still rotting away under a Republican controlled CON-gress who say they care so much about seniors. Keep voting for your incumbent in the upcoming primaries and important bills like this will continue to die every two years.

Where’s AARP? They have the money to saturate this country in TV ads demanding the House get this passed as well as the Senate so President Trump can sign it into law. Instead, not a peep. I have never belonged to AARP, thank you.

“If approved, H.R.193, better known as the “American Sovereignty Restoration Act,” would end U.S. participation in and funding of the widely ridiculed “dictators club” while protecting American sovereignty under the Constitution. Support for the effort is spreading like wildfire.” New American article.

Introduced January 3, 2017 it’s still rotting in committee. Keep voting for your incumbent in the upcoming primaries and our military will continue to be used as cannon fodder to fight their global, insidious, undeclared ‘wars’ for establishment of world government by force. Not to mention all the treaties supporting the great hoax known as ‘global warming’ and gun treaties.

H.R. 899 introduced February 7, 2017, to abolish the unconstitutional Federal Department of Education – ALL $65 BILLION funded this year with debt is still rotting in a House committee. The finest educational system in the world ruined by that cabinet fleecing the American people and cheating all of America’s children out of a good education. But, keep voting for those incumbents in CON-gress during the upcoming primaries and nothing will change.

And, of course, the big daddy: Abolishing the unconstitutional ‘Federal’ Reserve Banking Act of 1913. I wonder why Rand Paul during his years in the Senate has not taken up this number one issue with the same ferociousness as his father, former Congressman Ron Paul? Well, now he’s trying to recover from that criminal, unprovoked physical attack upon him by his neighbor.

Once again, I explain the greatest heist against the American people, the thievery, in my 44-pg, 2017 edition of Why A Bankrupt America booklet. I hope you get copies and give them as Christmas gifts to friends; employers to your employees. We have to educate our fellow Americans or nothing will change. Please be advised the last date I can ship to make sure you get your order before Christmas will be December 12th.

My last book, Taking Politics Out of Solutions, which is almost 400 pages with 33 pages of endnotes – the drop dead order date for Christmas delivery is December 13, 2017.  Excellent discounts for multiple orders.

I could go on but do want to cover a couple other things. Last week my column was on another little girl allegedly murdered by her mother’s boyfriend. Little Mariah Woods. He’s in jail. The autopsy report has not been released. I said in my column likely the autopsy report would show the 3-year old had been raped. Update: Mariah Woods was sexually abused by mom’s boyfriend before death, court documents say. Apparently, the mother knew, not only about the daughter, but her minor sons as well by that POS she brought into her home.

Remember the slaughter at the church last month here in Texas that killed 28 innocent people? Ryland Ward, age 5, is a survivor but his mother and two sisters, ages 5 & 7 were killed. Ryland’s other sister, age 9, did survive. Dad wasn’t at church that day. The mother died trying to shield her four children. Little Ryland is still in the hospital and doesn’t know his mom and sisters are dead. He will be in the hospital until mid-January.

His grandma thought it would be nice if people could send him a Christmas card to help cheer up that little boy. Or just a note with pictures of pets. What a great little project if you have children so they can be part of a little boy’s life. Not asking for money, just a few minutes of time that can make such a difference. If you’d like to send one: Ryland Ward, PO Box 174, Sutherland Springs, Texas 78161. I did.

I’m sure most of the country has heard of yet more destruction and sorrow for our fellow Americans – the five fires raging in the Southern California area. Oh, my God. The destruction is beyond words.

Horses by the dozens, dogs, cats and other wildlife burned to death. Thankfully, so far only one person has died. These extensive picture arrays are heartbreaking and truly frightening. I know and have been to all the places where the five fires are burning. In some places wind gusts of 80 – 90 mph just whipped through canyons making the fires spread so fast people barely got out. Wildlife, dogs, cats, all burned to death in untold numbers. These fires are truly what you can call apocalyptic.

California continues to burn as fast winds create whole new blazes, while flames leap freeways and astonishing photos show the more than 128,000 acres that have been scarred by the uncontrolled infernos

Entire lives wiped out at random: Wild winds fan ‘out of control’ 45,500-acre-fire across Southern California, randomly destroying some homes as neighboring plots survive unscathed and forcing 27,000 into evacuation

Dozens of race horses worth hundreds of thousands of dollars perish in California wildfires which have forced 230,000 to flee their homes

I live on a real tight budget, but made a small donation to The Animal Rescue Site because like Hurricane Irma in Florida, it’s such huge areas. Like Hurricanes Harvey, Irma and those horrible fires in Northern California that destroyed over 10,000 homes and business, the victims of those fires have lost everything or close to it. Just horrendous.

Please keep them in your prayers as it won’t be much of a Christmas for thousands of both the Northern (less than two months ago) and Southern California fires. If you’re thinking of the Red Cross, perhaps you might change your mind: Red Cross Demands Branches Remove Crucifixes to Be More Secular Instead, as I did, donate a little something to The Salvation Army