As fire when thrown into water is cooled down and put out, so also a false accusation when brought against a man of the purest and holiest character, boils over and is at once dissipated, and vanishes.  —Marcus Tullius Cicero (Let it be Lord, let it be soon)

Trump has a bigger, longer-term vision for this country than just sitting as a president for four years. He really does. And that’s what I was impressed by. —Michael T. Flynn

Obama has made incredibly poor decisions that have made us less safe. —Michael T. Flynn

The above quotes by Lt. General Michael T. Flynn helped to make him a target of the former administration, the Department of Justice and especially the FBI.  Michael Flynn is hated and feared by the corrupt cabal within the intelligence community.  As National Security Advisor to President Donald Trump, General Flynn would have ensnared the corrupt enemies of freedom, those same enemies who illegally spied on the entire campaign and new administration of Donald J. Trump, and falsely prosecuted so many who supported him for president.

On January 24, 2017, two FBI agents came to interview Mike Flynn, Peter Strzok and Joe Pientka who never told the General it was an “entrapment” interview.  Strzok has since been fired, and FBI Director Wray is hiding Joe Pientka.  Both agents said Michael Flynn never lied about anything, as did former FBI Director Comey.  He was set up by the Obama administration and Obama’s enablers in the DOJ.

On January 24, the day of Flynn’s takedown, Attorney General Sally Yates informed both Trump and VP Mike Pence that Flynn had lied to Pence about his phone call with the Russian ambassador. She also (falsely again) suggested that the phone call might have opened Flynn up to Russian blackmail and mentioned his alleged Logan Act violations, with which the president was not familiar.  Unfortunately, Trump swallowed Yates’s arguments and fired Flynn.

Questionable is the fact that there may have been a backdoor into the White House via VP Pence’s former Chief of Staff, Joshua Pitcock.  Pitcock’s wife was working as the top analyst for Peter Strzok on Hillary Clinton’s use of a private server.

Blood was in the water, and the one person Trump needed in his administration more than anyone was ousted.  FBI mission accomplished.

General Flynn never lied to anyone, and that includes VP Mike Pence who actually lied to the media.  The General fell on his sword for the new administration, and has been persecuted ever since.  Why you ask?  Because the Deep State knows exactly what Michael Flynn is capable of and they hate him and are they’re scared to death of him.

On November 30th, 2017, Mike Flynn signed a guilty plea; ostensibly admitting lying to investigators.  Flynn’s attorneys surely told him, not cooperating with a plea bargain could mean fines and a long jail sentence if he was found guilty.

The General was no pushover.  For 10 months he refused to cooperate. He lost his job, home, reputation, and entire fortune. He refused to sign a confession and agree to cooperate with Special Counsel Robert Mueller until they threatened to also prosecute his son, who was employed at Flynn’s private consulting firm.

The plea was accepted by Judge Contreras; who is also a Foreign Intelligence Surveillance Act (FISA) court judge.  Six days later, December 7th, 2017, Judge Contreras “was recused” from the case without explanation.

Initially, the General hired the firm of Covington and Burling, where Eric Holder is a partner.  The lawyers who represented him failed miserably as his counsel.

The first Mueller prosecutor of the Flynn case was corrupt prosecutor, Brandon Van Grack who has had cases previously overturned for the very same things he did in the Flynn case, withholding exculpatory evidence.  The Covington firm bankrupted the Flynn family in the very first year of representation with $6.7 million in fees.  Then they allegedly leaked a story to the media that Michael Jr. was about to be investigated.  When that story broke, the general followed the urging of the Covington lawyers and the prosecutor and negotiated an “under the table” guilty plea bargain to keep his son out of the fray.  A week later, the story ran about Contreras and Strzok’s close friendship.  That’s when Contreras was recused from the case.

Along came Judge Emmett Sullivan who had a recorded history of being a fair and impartial judge as stated in “Licensed to Lie,” by attorney Sidney Powell.  But on December 18, 2018, when the General appeared before Judge Sullivan, he was shaken to the core when the Judge accused the three-star general and 33-year military veteran of treason.  Sidney Powell was in the courtroom and was shocked.  Six months later, the General hired conservative firebrand Sidney Powell as his new legal counsel.

That’s how an innocent man “pleads guilty twice” in the same case. Recently released evidence withheld for over three years by the FBI shows that Trump’s National Security Advisor was actually framed and entrapped by the FBI and that he did not lie in the interview. It is a story of injustice, persecution and the failure of the rule of law.

The Department of Justice dismissed the prosecution against General Flynn in May 2020 when exculpatory evidence was finally released from the FBI proving the General had been purposely set up and ousted from the Trump administration.  This Brady evidence should have been turned over to the defense prior to a guilty plea.  Attorney General William Barr had hired former FBI agent and U.S. attorney, Jeffrey Jensen to look into the case. FBI Director Wray could have easily given the defense this information during these long months, but he was silent.

Things changed when lawyer Sydney Powell was hired in June of 2019 and convinced Flynn that he should never have pleaded guilty. Flynn agreed. He fired his lawyers, hired her firm, and submitted a brief to withdraw his guilty plea. Over Sullivan’s objections that Flynn had agreed that no further exculpatory evidence would be introduced, Powell put Flynn under a protective order and subsequently obtained unsealed new documents from the DOJ as well as investigations in the House and Senate.

The DOJ dropped the case against Flynn after evidence showed he had been set up, but Judge Emmett Sullivan refused to dismiss the case, despite the fact there was no prosecution and he had no constitutional right to continue the case.  Nevertheless, he hired outside attorneys and the case went before the appeals court where two of the three appointed judges agreed that the case be dismissed.  But that didn’t stop Judge Sullivan.

The U.S. Appeals Court for the DC Circuit vacated an earlier ruling by the court to dismiss the case of former national security adviser Michael Flynn. A majority of judges on the Circuit Court agreed to an en banc rehearing of the case against Flynn, meaning that all eleven of the court’s judges will oversee the case. The new hearing is set for August 11. District Court Judge Emmett Sullivan obviously has a vendetta against General Flynn and strings are being pulled to ensure Sullivan keeps the General in chains.

Attorney Powell was interviewed on July 30th by Sean Hannity.  Here is what she said.

It’s a sad day for the rule of law.  Judge Sullivan’s petition for rehearing should not have even been considered by the court because he had no standing to file it.  He’s not a party in the case.  He’s supposed to be a neutral umpire, and yet he has taken on the role of an advocate for some sort of hearing he wants to conduct back in his court on an issue the government has decided to dismiss, a case they decided to drop.  There’s no longer a case in controversy at all because both parties have agreed to dismiss it and he cannot act as a prosecutor because only the DOJ can under Article II of the constitution.  So there are two constitutional provisions that preclude him from doing what he’s trying to do, and the court seems to be indicating that its going to give him that opportunity despite the fact he has no constitutional authority to proceed.

Upon petition for the en banc hearing, the responses voted in favor of same, via Order No. 20-5143 setting aside the three panel judges, two of whom voted to dismiss.  This was filed on July 30, 2020.

The original three panel judges, who voted to dismiss were with two Republican-appointed judges carrying the majority.  They believed U.S. District Judge Emmett Sullivan overstepped his authority in second-guessing the prosecutors’ decision. Judge Neomi Rao, who was appointed to the circuit court by President Trump, wrote the majority opinion. Judge Robert Wilkins, an Obama appointee, dissented from the decision, saying he would grant Sullivan the space to explore the DOJ’s request for dismissal. 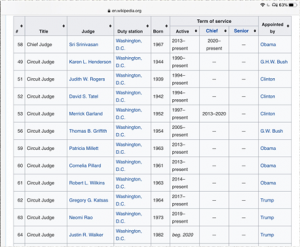 The court’s order also indicates that the judges hearing the case en banc will include seven Democratic appointees and three Republican appointees. One of the court’s judges, Trump appointee Greg Katsas, bowed out as he has in other disputes involving special counsel Robert Mueller’s office, which launched the Flynn prosecution. The decision to take the case en banc required the approval of a majority of the court’s active, un-recused judges, but no tally was released.

Following is the list of those DC Appeals court judges and the presidents who appointed them.  This is a stacked deck against an innocent man who has fought for three and a half years to prove he was set up by the FBI and never lied to anyone.

The circuit court is populated with a majority of judges appointed by Democrats. If the court decides to “extend the game” against Flynn “into extra innings,” it’s because it’s not a matter of law but a matter of politics. (The rule of law be damned.)

A full court hearing on Sullivan’s failure to dismiss would likely extend into the fall, with a final decision against Flynn coming out just before the November election. As Andrea Widburg, writing at the American Thinker, so aptly put it: “The D.C. Circuit has a plethora of Democrat-appointed judges. No matter the law, that doesn’t bode well for Flynn.”

Or for the president.

There are two choices left to the General and his attorney…to take this to the Supreme Court, who denies many hearings, and is never trustworthy to follow the rule of law.  (There is no guarantee the high court would take the case even though it has been in the public purview for over three years.) The only other opportunity for redress is to request that President Trump step in and stop this entire stranglehold on an innocent highly decorated veteran who was set up by Obama’s Department of Justice.

God works in mysterious ways, His wonders to perform.  Pray that the rule of law outshines the politics and this veteran is finally set free.