Republicans Can “Pack the Court”, Too

Members of Congress who belong to the Democrat/Communist Party USA are in a hurry, a bit hurry.  Most of them know Cheater China Joe Biden did not win the election last November and that chapter is not closed by any means.

Watching the illegitimate “Biden administration” since January 20, 2021, has been like watching Keystone Cops.  Actually worse than that.  More like a box of chickens clucking around.  I have no doubt whatsoever the world is laughing at America.

His illegitimate cabinet picks are bad for America.  I shouldn’t say Joe’s picks as those not in denial know the other impostor president, Hussein Obama and Valerie Jarrett are running the disaster out there in the District of Criminals.  The U.S. Ambassador to the U.N., Linda Thomas-Greenfield, publicly proclaimed to the world recently that “White supremacy was “weaved” into U.S. founding documents and principles”. 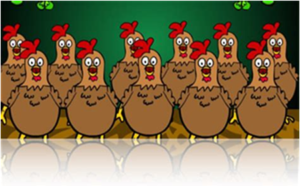 Cheater Joe’s current nominee for Asst. Attorney General:  Kristen Clarke is unfit to be in government – David Harsanyi notes controversial Biden nominee supported ‘racist pseudoscientific quackery’:  “If Donald Trump, or any Republican, had picked a nominee who had once promoted a Holocaust-denying white identitarian to an assistant AG position there would – rightly – be a media meltdown. Clarke has every right to live free and work where she can, but she has no God-given right to hold a position of power over citizens.  With her history, she shouldn’t.”

I’m not going to go into the whole list of verifiable extremists Cheater China Joe’s handlers have installed but it is beyond sickening.

One of the biggest wet dreams for Democrats in Congress (and their useful fool sycophants) is “packing the Supreme Court”.  Not a new undertaking but urgent in their minds after Trump was able to put new luke-warm “conservatives” on the bench who in the end, betrayed him over the fraudulent election. 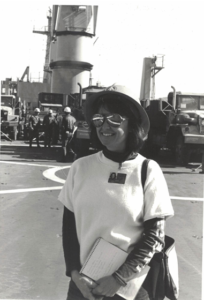 much fun covering activities on the base.  Yes, that’s me for an exercise which I wrote my article for our base newspaper, Military Magazine:  Shifting Into High Gear.  “The United States and the Republic of Korea (ROK) recently began Team Spirit “88” Field Training Exercise.”

I wrote many stories and ironically, one was about socialist mass murderer, Franklin Delano Roosevelt and his effort to increase the number of justices on SCOTUS to 15.  The usual cabal of miscreants in this current session of Congress, Sen. Ed Markey, Rep. Jerry Nadler, Rep. Hank Johnson, Rep. Mondaire Jones, want to amend Section 1, Title 28 of the U.S. Code which reads:  The Supreme Court of the United States shall consist of a Chief Justice of the United States and eight associate justices, any six of whom shall constitute a quorum.

This new bill seeks to change Title 28 US Code to:  “A Chief Justice of the United States and twelve associate justices, any eight of whom shall constitute a quorum.”

Cheater China Joe had this to say about it back in 1983 when he chaired the Judiciary Committee:  “But it was a bonehead idea. It was a terrible, terrible mistake to make.”

Markey, et al claim it would “restore the integrity of the court”.  Um, that’s really not the way to get on the favorable side of current Supreme Court Justices but then again, those with such little brain matter don’t have the capacity to think that far ahead.

Trump hater, Jerry Nadler, vomited up this babble: “Some people will say we’re packing the Court. We’re not packing. We’re unpacking.  Senator McConnell and the Republicans packed it over the last couple of years.”  Uh, no, Jerry, vacancies needed to be filled.  But the dullards out there who know nothing about this issue will all dutifully nod their little bubble heads.

What can YOU do to help stop that insanity?  Call your Democrat U.S. House slug and politely tell he/she the primaries are coming up and you will be part of the effort to make sure you lose if you support that bill as well as getting rid of the Electoral College.

No one should be voting for ANY member of the Democrat/Communist Party USA, period.  I have no doubt those who’ve lost their jobs since old Joe took over will not be voting Democrat.  But, the good news, it’s spreading:  Uh Oh: Democrats are Bleeding Support with One of Their Key Voting Blocs

House.gov and senate.gov – look them up and call.  A few million calls will get the job done.  Remind them the Republicans can do the same thing right back.  Tit for tat.  Oh, can I say that or will it offend someone?

I believe this is all for the primaries and then Nov. 2022.  The socialists & communists in Congress want this to appease their radical left voters knowing it likely won’t succeed.  Why?  Because they (Pelosi, Schumer, et al) know if Republicans take the House and Senate in the November 2022 election, they can do the same thing:  Introduce a bill change 28 US Code and add two, six or seven new justices.  Yes, they can.  If Biden is still “in office”, a 2/3rds vote by both chambers in Congress can override his veto.

So, you see, this is just more political shenanigans.  Republicans change the code, then if Democrats become a majority, they change the code again and/or restore the Electoral College.  Scum like Pelosi, Schumer and their ilk know the American people do not want that kind of chaos that would resemble a tennis match.  But, those behind both issues can and will use it for the primaries for votes.

Shifting gears for a minute, I received so much email about my last column, The U.S. Not Prepared for Mini Ice Age: Wake Up, I wanted to share with you a conversation I had with two very nice gentlemen who knocked on my front door the other day.  They wanted to tell me about putting solar panels in if I was one of the unlucky who got bombarded by the March 13th hail storm.  Yes, I will be getting a new roof, new roof on my storage shed and repair my two-year old fences in the back yard. 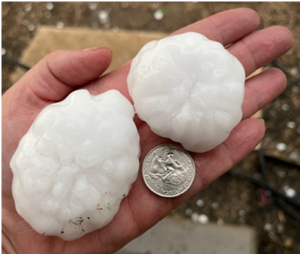 While my Jack Russell Terrier hides during storms, my Tibetan Mastiff isn’t usually bothered.  Not that night; she whimpered the whole time until it stopped.  In my back yard, hail the size of my fist.  This photo is from another location here in Texas.

How exciting the government would give me $3,000 for jumping on this opportunity!  I ask this nice man where in the U.S. Constitution does it authorize Congress to give people three grand for putting solar panels on their house?  One of them hymned and hawed.  Basically, it didn’t matter because that’s how those two nice men make their living.  Didn’t matter to them that Americans who don’t have solar will be subsidizing those who choose to install solar panels.

I furthered on asking them how can you justify giving – in violation of the supreme law of the land – “free” money, in this case $3,000, to people when the U.S. Treasury is overdrawn just under $30 TRILLION dollars?  They agreed the debt was too high but they were there to sell me this wonderful opportunity because it’s how they make their living.  I’ve said this for a long time:  When it comes to the U.S. Constitution or someone’s job, guess who wins?

I want everyone in America to be successful but not by shredding the Constitution and certainly not by saddling our children and grandchildren with UNPAYABLE debt.

“Then I say, the earth belongs to each of these generations during its course, fully and in its own right. The second generation receives it clear of the debts and incumbrances of the first, the third of the second, and so on. For if the first could charge it with a debt, then the earth would belong to the dead and not to the living generation. Then, no generation can contract debts greater than may be paid during the course of its own existence.” –Thomas Jefferson to James Madison, 1789. ME 7:455

I have no objection to people or businesses using solar but people need to know the destruction they cause to the environment.  I also informed them we’ve entered into a mini-ice age. The failure of so-called unreliable, renewable energy during the Polar Vortex last February was a deadly wake-up call for Americans.  I politely told them solar won’t keep you alive when the sun isn’t warming the planet.  Response:  Well, you know you can store solar power?  My response:  Yes, but not enough to last as long as 35 years.  They didn’t get their sale and moved on to the next house.

Make no mistake:  Those dark spots one sees on the sun are disappearing.  That is a scientific fact climate change hustlers can’t deny because it’s there for all to see.

The climate change hoax is wearing thin as the truth about global warming aka climate change reaches more Americans.  And real science backed data warning we have entered into a mini ice age.  So, time to crank up the professional liars passing themselves off as reporters, journalists and news anchors:

“A number of major news organizations worldwide, ranging from Scientific American and The Columbia Journalism Review to The Guardian and Al Jazeera, have signed a pledge to begin referring to “climate change” as a “climate emergency” in their reporting.

“Scientific American has agreed with major news outlets worldwide to start using the term ‘climate emergency’ in its coverage of climate change,” the publication announced Monday in a tweet to its 3.9 million followers touting “the impact we hope it can have throughout the media landscape.”

“We Are Living in a Climate Emergency, and We’re Going to Say So,” the headline of a Scientific American commentary published Monday declares. Claiming that that climate change is “the biggest environmental emergency to beset the earth in millennia,” the piece announces the name change.”

No, we aren’t living in a climate emergency but you see how devious they are in reaching the uninformed, brain washed masses.

A mini ice age means prolonged life-threatening temperatures.  People around the world should take this very seriously.  The world has been manipulated and lied to on a grand scale about global warming aka climate change for 50 years.  I urge you to take 15 minutes of your time and read the article below.  Individuals at NASA should go to jail for manipulating scientific data to suit their agenda.

Help me inform Americans with my book, Taking Politics Out of Solutions.  400 pages of facts and solutions on these issues: “Federal” Reserve, the income tax, education, Medicare, SS, the critical, fraudulent ratification of the Seventeenth Amendment and more.  800-955-0116 for phone orders