We had no more begin to recover slightly from the Las Vegas shooting massacre a week earlier when torch fires were being reported in Santa Rosa, California where my daughter and family live. There had been no winds in Santa Rosa that evening but about 10:00 p.m. suddenly, the wind picked up and 60 striker fires came out of nowhere and everything was incinerated.

One person said it looked like a “nuclear bomb” had gone off.  Firemen were overwhelmed because they had so many fires to deal with at once. Flames came out of nowhere and buildings were reduced to ashes. Shocking aerial images capture the devastation wrought by the California wildfires as the death toll rises to 31 dead and many missing.  My family is safe but their house is gone in which they lived since marrying in 2000. Hopefully insurance will cover their loss and help them start again but right now they are living with a woman, a friend of our daughters, with a big house who has taken them to live with her. In addition, these folks are without jobs due to the damage. Our daughter is welcome back with us but how many others don’t have families? And how long will it be before the government makes it mandatory for people to take others into their homes?

It is being claimed in Santa Rosa, the Sheriff was going to houses which had guns to collect them before the looters get them. Simultaneously fires were erupting in Orange County by Los Angeles. And as I sit down on 10/12 to draft this article, a tornado has struck an area north of me in Canby and Aurora, Oregon about 25 miles south of Portland.  Air planes were overturned at the little Aurora airport and other damage reported. 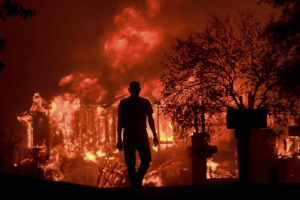 Santa Rosa with a 2015 population of 174,727 is known for its wineries and the Charles M. Schultz Museum.  His widow had to flee from her home which was also destroyed. Charles was born in Minneapolis, Minnesota on Nov. 26, 1922 and launched his comic strip PEANUTS in 1950 featuring hero Charlie Brown. Over the years the strip would run in more than 2000 newspapers and in many languages.  Charles died in his sleep at home Feb. 12, 2000 from colon cancer.

LIVING IN AN AGE OF PANIC

Never in my lifetime have I ever witnessed anything like we’ve seen happening in the world. We seem to be living in an age of panic.  People who decades ago with the presidencies of  Democrat Wilson and FDR begin to slide ever so easily towards socialism looking to the government to protect and bail them out are finally waking up to the fact it is the government that is causing many of these earth-shaking catastrophic events all in the interest of population reduction; however, in 1998 a U.S. News and World Report  stated the Earth is capable of producing food for 80 billion people (8 times the projected population for 2050) Some think improved technology will enable the Earth to feed even more.

POWERS OF ANTICHRIST ARE RISING

David J. Meyer (now deceased) creator of the Last Trumpet Newsletter said in a Nov. 2007 newsletter he stood in the Social Engineering Chamber of the United Nations in the presence of witnesses and was told by an arrogant U.N. official that they are actively involved in population reduction, and anyone who will not receive their directives, including immunizations, would not be able to receive their food.  He added: The powers of antichrist are rising.

And anyone approaching 70 or over 70 should look at what Obamacare has in store for them – straight out of the UN Agenda 21/Sustainable Development and they want 85% of the population eliminated.  And with a letter containing 416 words signed by Obama, the U.S. government will resume its role in globally funding abortions.- the same old Eugenics Movement.  And, this brings us to Sodom and Gomorrah and the acceptance of homosexuality and same sex marriage where they cannot procreate.  Death Education advocates who teach the classes in our public schools also appear to be obsessed with the notion that the earth is overpopulated. However, Psalm 127:5 suggests we are to be fruitful and multiply and have a quiver of kids.  America is losing its European heritage because they are “aborting” or not having children as a “choice” while other ethnic groups are having lots of children.

Yes, experimental weather modification has come to our neighborhoods these last few months so rapidly we can’t keep up.  With hurricanes, tornado’s, flooding and severe storms tearing up the country from one end to another, Jay Leno once asked “Are we sure this is a good time to take God out of the Pledge of Allegiance?” And I think this is what each of us should be asking ourselves as we continue to rid God from our midst in the chase after multiculturalism and abandoning traditional moral values.   In the Bible, Amos names the sins of the people, and warns that He will send His wrath upon them -not only by natural calamities, but by a famine of the word of God. Austin Miles tells more about the shocking truth how Americans have been manipulated.

BRING OUT THE EXPERTS

Appalachian State Researchers Link Western Wildfire Activity to Arctic Warming was the 10/12/2017 newspaper article by Peter Soule who claims the fires are potentially linked to larger atmospheric processes related to human-caused climate change. Researcher from Appalachian State University and the University of North Carolina at Greensboro believe there might be a connection.  How right they are: Human caused but it has nothing to do with Green Religion Al Gore’s obdurate jabberwocky about climate change.  Gore predicted in 2007 that Arctic sea ice would be gone by 2013. He repeated the claim in 2008 and 2009, extending the timing for the fulfillment of his prophecy out to 2014 or 2016. These misled experts and their deceived followers are still believing the sun rose in the West over Oregon’s beaches the day of the solar eclipse.

We may be experiencing right now the “End Times Ambiance” – dress rehearsals: Charlottesville, solar eclipse, Hurricane Harvey, Mexico earthquake, Hurricane Irma. Then we have the fires in California killing many people. Luke 21:25-28 about the scorched earth.  I hold my breath as I write this: The promised Pacific Coast Earthquake while the snow is falling early and heavy on Mt. Hood and skiers are lining up to hit the slopes may be next.   Perhaps 2016 was our last election cycle. We, the Trump Deplorables, as former Secretary of State, Hillary Clinton, called us may not be able to save this America as we once knew it, for we may actually be approaching the ‘end times’ as seen in the Book of Revelation because from the lips of even the Marxist liberals we are hearing them say, “We’ve never in our lifetime experienced such events…”