Shelley Luther recently gained national notoriety by refusing to keep her hair salon closed when ordered by the state of Texas to do so over Coronavirus restrictions, ripping up a citation she received, getting arrested, and then being sentenced to seven days jail time by Judge Eric Moyé. Luther was released after serving a day, as the Supreme Court of Texas ordered her release. TX Governor Abbott shortly thereafter declared that the state of Texas would not be imprisoning business owners for violating COVID-19 restrictions. Governor Abbott’s order was effective immediately and was to be applied retroactively.

Dr. Ivette Lozano said she learned about how to treat COVID-19 patients from President Trump. Dr. Lozano declared that she has treated all of her COVID-19 patients with hydroxychloroquine and azithromycin (z-pack) and ALL of her patients recovered from their ailments within days of this prescribed treatment. Dr. Lozano went on to say that the medical establishment is conspiring to keep this cheap and 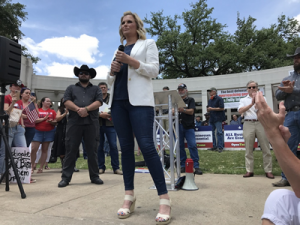 effective treatment of COVID-19 from the public, as they are actively promoting vaccines to address coronavirus. Video.

Retired LTC Allen West quoting Thomas Paine said, “These are the times that try men’s souls.” West went on to say that he was raised under the belief that “A man must stand for something or else he’ll fall for anything.” Quoting Thomas Jefferson, West continued, “In matters of style swim with the current, but in matters of substance stand like a rock.”

West went on to speak about Shelley Luther, calling her the “Rosa Parks of our generation.” On December 01, 1955, Rosa Parks was told that she could not sit on a certain seat at the front of a bus, because she was black. Parks was arrested for refusing to give up her seat and her arrest galvanized the nation against America’s segregation laws. Like Rosa Parks, Shelley Luther is a woman who stood against government tyranny, declaring that it was not selfish for her to defy unconstitutional edicts, which deprived her of the right to open her business and feed her children. 1:25:52 – 137:42 video.

Shelley Luther spoke of her recent experiences and the good she hopes to accomplish now that she is out of jail. 1:37:36 – 1:53:00 video.