The cast of characters in the Democratic Party for the upcoming 2020 presidential race against Donald ‘Make America Great Again’ Trump has already presented a potpourri of liberal-left, socialist Marxist candidates including:

Three new George Soros campaigns to further advance the left’s radical agenda have been uncovered in separate reports published this past week. 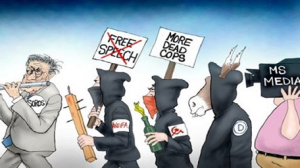 Details of the financial and staffing nexus between OSF and the U.S. government are available in an extraordinarily detailed Judicial Watch investigative report.

With the help of American taxpayer dollars, Soros bolsters a radical leftwing agenda that in the United States has included:

The list extends even further, with Soros tentacles—money—reaching previously unknown domestic and foreign causes that promote a broad leftwing agenda at various levels. It turns out Soros donated $408,000 to a Political Action Committee (PAC) that supported Cook County State’s Attorney Kim Foxx, whose office just dropped felony charges against the actor who fabricated a hate crime earlier this year.

The actor, Jussie Smollett, claimed he was attacked in Chicago on his way home from a sandwich shop at 2 a.m. He said two masked men shouted racial and homophobic slurs, beat him, poured bleach on him and tied a rope around his neck.

Smollett blamed the crime on white Trump supporters. When the hoax was uncovered, prosecutors charged him with 16 felonies but Foxx dropped all the charges this week. Illinois campaign records provided in the news report show that Soros personally contributed $333,000 to Foxx’s super PAC before the March 15, 2016 primary was over and an additional $75,000 after she became Cook County’s top prosecutor.

It should be noted that the Chicago Police Department’s top brass and its rank-and-file officers, many of whom are African Americans, condemned Kim Foxx and Smollett’s defenders.

“Soros has been intervening in local races for prosecutor, state’s attorney, and district attorney — often backing left-wing Democrats against other Democrats in doing so,” according to an article in NewswithViews.com.

Another report published this week reveals that a Soros foundation gave $1 million to a nonprofit that favors choosing the president by popular vote. The group, National Popular Vote Inc., gets millions from leftist groups to push its purported agenda of ensuring that “every vote in every state” matters.

Another group, Tides Foundation, that raises money for leftwing causes, also contributed to the popular vote nonprofit. Soros’ OSF’s have given millions of dollars to the Tides Foundation, according to records provided in the story. Based in San Francisco, the group envisions a world of shared prosperity and social justice founded on equality, human rights, healthy communities and a sustainable environment. The nonprofit strives to accelerate the pace of social change by, among other things, working with “marginalized communities.” It is the promise of a New World Order embraced by far too many American leaders and activists.

The last article documents what Judicial Watch has reported for years—Soros’ huge influence in the U.S. government, specifically the State Department. The agency pressured Ukraine officials to drop an investigation of a Soros group during the 2016 U.S. presidential election. Barack Obama’s U.S. ambassador actually gave Ukraine’s prosecutor general a list of people who should not be prosecuted. “The U.S.-Soros collaboration was visible in Kiev,” the article states. “Several senior Department of Justice (DOJ) officials and FBI agents appeared in pictures as participants or attendees at Soros-sponsored events and conferences.”

The piece further reveals that internal memos from Soros’ foundations describe a concerted strategy of creating friendships inside key U.S. government agencies such as the departments of Justice and State. This is what many are calling the Deep State.