Taiwan Is the Real China

The “People’s” Republic of China is an Illegitimate Dictatorship

This is easy to prove.

The Chinese Communist Party (CCP), as is typical of all dictatorships, excels at the destruction of the human soul and freedom. The CCP has done its best to make the world afraid of its power, but one tiny country recently said “no.” 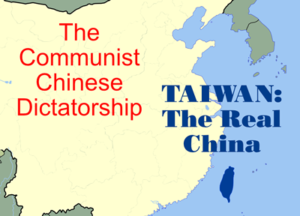 Kudos to Lithuania for recognizing Taiwan and standing up to the Chinese Communist Party. Lithuania is confronting a bully at great risk to its prosperity and well-being, while much larger countries slink away. Accommodating totalitarians never works. Thugs and criminals who murdered tens of millions of innocent civilians have no conscience and will not change their behavior unless they are forced to do so by a stronger opponent.

Communist China demands that the world acknowledge that the real China is Communist China and that Taiwan has no validity as a separate country. They rattle their sabers and snarl threats to anyone who dares to question their narrative about Taiwan. Companies and individuals who want to profit from trade with Mainland China meekly apologize and move on, kicking Taiwan to the curb. To those who make millions of dollars from the Communist Chinese while abandoning Taiwan, one might suggest that they remember the words of Jesus in Mark 8:36: “For what shall it profit a man, if he shall gain the whole world, and lose his own soul?”

But let’s consider for a moment the moral status of Taiwan compared to the CCP. And I say “CCP”—not “Mainland China”—because the communists in China are a minority of fascists who have enslaved their citizens and do not represent the hearts and minds of their people.

Slavery is the dividing line. The CCP might say that they don’t practice slavery, but enslaving an entire society under a totalitarian system of oppression fits the bill. It’s not just China, of course. North Korea, Iran, Saudi Arabia, Cuba, Venezuela, and every other repressive regime in the world can be succinctly labeled as a country of “illegitimate slavers.”

Someone might point to the long history of conquest in the world and excuse the CCP as the military victor in an internal conflict. Mao Zedong won the war and to the victor go the spoils. Hasn’t that happened everywhere in the world, throughout history? Look at Britain: the Angles, Saxons, and Jutes occupied England and became “the rightful rulers,” and then the Normans conquered the Anglo-Saxons. Such is life, and such is history.

And slavery? It has existed almost everywhere, throughout antiquity. It was just “normal.” But it’s not normal anymore, or at least it shouldn’t be. The Hard-Left will say that whites were the worst slavers of all (ignoring every other race that had slaves and ignoring that millions of whites were also enslaved).

The truth is that in the 1800s, mostly white, Judeo-Christian abolitionists in Britain and America publicly spoke and acted in defense of all humans of every race as sacred creations of God and initiated an enormous change in the world with their victorious battle against slavery. The fact that over 300,000 white men gave their lives in the American Civil War to free the slaves was not a trivial matter. It was an extraordinary and unprecedented sacrifice for a noble cause.

Very few people in the world today, either from the Left, the Right, or anywhere else, will publicly defend slavery—the owning of another human being. Criminals engage in it, and certain Islamic countries like Mauritania surreptitiously allow it, but it’s not publicly supported.

It has become a gray area, however, when one examines the quality of freedom versus slavery in a citizen’s relationship to government.

In China, slaves are not triumphantly paraded in chains past the doors of the palaces, as was common in the Roman empire. No, in China, the entire populace is enslaved. Citizens are monitored constantly, and they are not free to conduct their affairs as they wish.

Some will quibble and state that Chinese citizens can run their businesses and make millions, ignoring the fact that if those millionaires speak out against the CCP, they’ll be “disappeared.”

Thus, totalitarian governments that oppress their citizens become slavers by default. Life in North Korea, a society that might be closest to the horrors of the novel 1984, is simply not free at all. Their example should give pause to Western citizens who have already begun to lose their freedoms in the last two years of the China-initiated Covid pandemic.

The 1.4 billion citizens of Communist China are enslaved by a minority gang of power-hungry, well-fed slavers who look at their citizens with contempt. Their current slaver in chief is President Xi Jinping.

From famous actresses like Zhao Wei, who “disappear,” to the mass imprisonment of Muslim Uyghurs, the CCP rules with implacable tyranny. Their military buildup, fueled by Western trade dollars and the theft of Western technology, threatens the world and threatens Taiwan in the short term.

If Mao Zedong had created a free and democratic society after he came to power, China might have the moral standing to declare that it’s the “real China.” If democracy had flourished, Taiwan might never have been established. All would be well in China, at least relatively speaking.

But today, in the twenty-first century, when slavery is almost universally condemned, slavery by government still exists and is growing worse. Mainland China is its largest purveyor. Oppression of populations marks the difference between dictatorships and the free countries of the world.

Even though most countries of the world have problematic histories of conquest, countries like England and America that supported the growth of freedom gained a new ethical credibility and the moral right to exist that the communist government of China does not share.

Taiwan has held the line and has demonstrated that the Chinese people are better than the CCP and do indeed value democracy and freedom.

Taiwan has firmly established that its small island nation is the Real China. The mainland Communist Chinese are Illegitimate Slavers who, if left unchecked, will continue to enslave their unfortunate population and will do their utmost to enslave Taiwan and as much of the world as they possibly can.

The CCP has no moral standing. Their 1.4 billion citizens deserve to be free.

Map of China and Taiwan: Public Domain. Modified and illustrated by the author.

About the Author: Peter Falkenberg Brown

Peter Falkenberg Brown is the Chairman of the Gray Republican Committee in Gray, Maine. He’s a writer, author, and public speaker. He publishes essays and hosts a video/podcast channel called “The FalkenBrown Show” (aka “Love, Freedom, & the World”) at his website: https://peterfalkenbergbrown.com. He’s written three books, with five more on the way. His newest book will be published soon and is called The Living Compass of Kindness and Compassionate Love: Essays on Love, Beauty, and the Mystical Path. He’s written a book called The Mystical Love of God and an abstinence curriculum called The True Love Thing to Do.