To compel a man to subsidize with his taxes the propagation of ideas which he disbelieves and abhors is sinful and tyrannical. —Thomas Jefferson – Founding Father and U.S. President

I cannot undertake to lay my finger on that article of the Constitution which granted a right to Congress of expending, on objects of benevolence, the money of their constituents…  —James Madison – Founding Father and U.S. President

The power to tax is the power to destroy.  —John Marshall – Founding Father and 4th U.S. Chief Justice

Collecting more taxes than is absolutely necessary (according to our Constitution) is legalized robbery. —President Calvin Coolidge

If, from the more wretched parts of the old world, we look at those which are in an advanced stage of improvement, we still find the greedy hand of government thrusting itself into every corner and crevice of industry, and grasping the spoil of the multitude. Invention is continually exercised, to furnish new pretenses for revenues and taxation. It watches prosperity as its prey and permits none to escape without tribute. —Thomas Paine – Founding Father

The whores in Washington DC are money junkies who will ultimately suck the life out of our country for the benefit of their friends and family.  Franklin Delano Roosevelt was no different, his administration was infiltrated with communist agents, agents he allowed to destroy and dismantle the standards set forth by the founders of our Constitutional Republic.

FDR told us the arrangement with Stalin after WWII was a “good deal.” China turned Red, half of Germany was controlled by Communists, and the world was sold to the devil.  Do I trust government, not then and not today!  Yet, I know the President we have in our White House is one of the best men we have ever chosen and he truly loves this country.

Nevertheless, in the long run, the economists who designed both Reagan’s and Trump’s tax programs ended up hurting taxpayers, and ultimately the entire country.  The Democratic socialists always regain power, and when they do, the taxes get raised, but the eliminated deductions are never given back to us.  Worse yet, the 2017 tax reduction has motivated liberals to move out of high tax states into Red states, eventually turning them Blue. 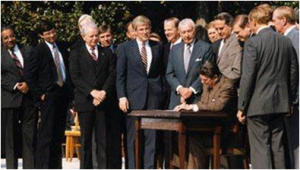 In 1981, Reagan lowered federal income tax rates significantly with the signing of the Economic Recovery Tax Act of 1981, which lowered the top marginal tax brackets and slashed estate taxes and trimmed corporate taxes over five years.

Unfortunately, his 1982 tax increase undid a third of his initial tax cut. Reagan agreed to the tax hikes on the promise from Congress of a $3 reduction in spending for every $1 increase in taxes. Promises made, but never kept.

In 1983, Reagan instituted a payroll tax increase on Social Security and Medicare hospital insurance. In 1984 another bill was introduced that closed tax loopholes. According to tax historian Joseph Thorndike, the bipartisan bills of 1982 and 1984 “constituted the largest tax increase ever enacted during peacetime.”

Then came the Tax Reform Act of 1986 where Reagan and Congress sought to simplify the tax system by eliminating many deductions, reducing the highest marginal rates, and reducing the number of tax brackets. It exempted millions of low-income families from a federal income tax by expanding the standard deduction, personal exemption and earned income tax credit (wealth redistribution). It drastically reduced the number of tax brackets, with the top rate for individuals cut from 50 percent to 28 percent; and it slashed corporate tax rates from 48 percent to 34 percent, paid for by eliminating or reducing corporate tax breaks.

It destroyed the middle-class deductions we used to have. There were many, even for contact lens solutions and OTC medications, deductions for interest on credit card purchases and interest on car loans…now long gone, plus so much more.  Middle class Americans were screwed, but they didn’t realize it until Democrats regained power.

This reminds me of Hydra, the mythical Greek beast with hundreds of heads. Each time you cut one off, two more grow back. Like Hydra, our tax code has grown out of control. Since 1986, Congress has made 15,000 changes to the tax code. 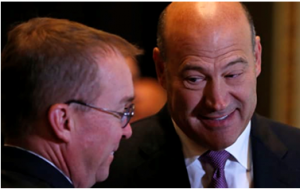 Gary Cohn is an American business leader who served as the 11th Director of the National Economic Council and chief economic advisor to President Trump from 2017 to 2018. When Secretary of the Treasury, Steven Mnuchin’s confirmation hearings were held up, Cohn pushed ahead on taxes, infrastructure, financial regulation, and replacing the health-care law.

Cohn was a supporter of globalism and was nicknamed “Globalist Gary” and “Carbon Tax Cohn.”  He led the Trump administration’s efforts to pass the Tax Cuts and Jobs Act of 2017 (TCJA). Mick Mulvaney, the Director of the Office of Management and Budget said about Gary Cohn, “As a right-wing conservative and founding member of the Freedom Caucus, I never expected that the coworker I would work closest, and best with at the White House would be a globalist.”

So, what did the TCJA actually do for us?  It’s not all good news for taxpayers. The TCJA also eliminates or limits many tax breaks, and much of the tax relief is only temporary.  It includes significant changes for individual taxpayers, most of which took effect for 2018, but expires after 2025.  Once they expire, the tax rate will undoubtedly be hiked, but bye-bye to our former deductions, just like the ones we lost with Reagan.

TCJA calls for annual inflation adjustments to be calculated using the chained consumer price index.  This will push taxpayers into a higher tax bracket much quickly and far easier.  This part is permanent.

The increased standard deduction could compensate for the elimination of the exemptions, and perhaps even provide some additional tax savings. But for those with many dependents or who itemize deductions, these changes might result in a higher tax bill — depending in part on the extent to which they can benefit from the family tax credits.  Many common and righteous deductions are eliminated.

There are many more changes, especially to business, but these are just a few of those which affect individual taxpayers.

Some folks are seeing smaller federal tax bites and bigger refunds, thanks to a more generous standard deduction in the tax overhaul of 2017, and this is the part the president wants to make permanent. But the millions of people who are accustomed to writing off state income tax and local property tax payments are feeling the pinch due to one of the most contentious aspects of the revised system.

It limits deductions for state and local taxes (SALT) to $10,000 on a joint return, which has the intended effect of increasing federal taxes, particularly on residents of high-taxing states such as California and New York, and don’t forget New Jersey, Oregon, Washington State, Massachusetts and others.  Folks who own homes in both warm and cold climates are limited to the deduction, but it’s not just luxury homes, the middle class is feeling the pinch as well.

New York Governor Andrew Cuomo said that his state has collected $2.3 billion less during December and January of tax revenue.  And this is blamed on the flight of high-income taxpayers to states with low or no state income taxes, especially Florida.

States with no income tax like Florida, Texas and Tennessee are seeing population explosions.  Other states are popular, but these three are at the top, and all three are Red States!  People are leaving these high tax states in droves.  Did globalist Gary Cohn figure this into the tax plan?

Virginia used to be a conservative state until many of the Democrat DC residents moved south, and now they’ve taken over North Carolina as well.  When they leave the higher cost living areas, they don’t leave behind their politics, they bring them with them, and their newly occupied states eventually turn Blue.  This is the danger in the 2017 tax bill.America could drastically change. 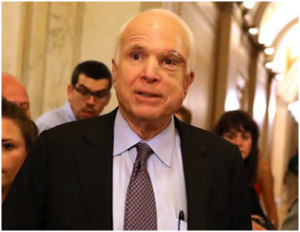 Most middle class Americans gained in 2018 through the new tax bill, but we must remember that thanks to neo-con Trotskyite Republican Senators John McCain, Susan Collins and Lisa Murkowski, Repeal and Replace for Obamacare failed.  McCain had campaigned on a promise to repeal the bill, but once again he lied to his constituents.His hatred for President Trump meant more than his promise to the people. The House passed the bill by a narrow margin.

In 2019, business insurance costs went up exponentially for employees.  Even privately held insurance went up again including higher deductibles. In 2020, many employees are paying increases of $2600 or higher per year to cover the cost of healthcare and that’s with deductibles reaching from $5,000 to $15,000 per family.

This easily wipes out the paycheck gains of the 2017 middle class tax cut.  Medical deductibles have risen every year across the board; most families never meet the deductibles for the year, and if they do, it’s not until September or October. The cost of medication has increased as well.

Under Obamacare, physicians who prescribe medications must be seen at least once a year to insure they can continue to fill your prescriptions throughout the year and each year new paperwork is required. And now, insurers including Blue Cross and Medicare insist that if you have hypertension, high cholesterol, or are on medications that used to be checked during yearly physicals,you must now see your physician two to four times a year for blood tests.  Americans who have been on medications for 15 to 20 years and only needed yearly checkups, are now stuck with extra checkups and blood tests.

The costs are increasing exponentially with the deductibles and having to pay for more blood tests and office visits per year is punitive. If patients fail to keep these appointments, insurers can and will consider them “non-compliant patients” and drop them from their insurance.

Yes, Obamacare needs to be destroyed, and national healthcare in America needs to be buried in the dustbin of toxic and murderous ideas and that is why we need to regain the House.

Communist Bernie Sanders and his Democratic socialist comrades love progressive taxation, and they support the Affordable Care Act as a first, but insufficient, step toward full national health care.  Like all socialists, their political theory is derived from Karl Marx, advocating class war and leading to a society in which all property is publicly owned and each person works and is paid according to their abilities and needs.

The Trumps were close to Norman Vincent Peale and his family.  Peale was the nationally renowned pastor of Marble Collegiate in Manhattan.  He was also known for his opposition to collectivism, from FDR’s New Deal, to Soviet communism.  Peale knew communism was the biggest threat to liberty and freedom, and Donald Trump, who loved Peale, knows that as well.  It is why he ran for president.  He knows that freedom means individual choice, not communist collectivization.

President Donald Trump absolutely must be re-elected…but more importantly, true hardcore old-right conservatives must replace the neo-con Republicans and the socialist democrats in Congress.  We must regain the House and keep and enlarge the Senate with strongholds of true conservative old-right Constitutionalists.

President Trump is counting on us to help him Make America Great Again.