A recently posted NewsWithViews article titled, “The Rapture is Created as an Exit Strategy for Those Who Have Refused to Obey the Lord?,” compelled me to respond and refute that author’s contention that there will be no rapture(s).

The very title itself makes no sense. Those who refuse to obey the Lord will not be raptured and therefore will be left behind, so how can the rapture be an exit strategy for them?

People who do not believe in the rapture(s) seem to think that by their efforts they will stop the coming New World Order, the great tribulation, and rise of the Antichrist. These events are written in Scripture prophecy and cannot be stopped. The belief in rapture(s) is neither heretical or a misunderstanding. It is an assurance based on faith and God’s word. 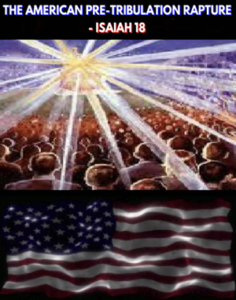 2 THESSALONIANS 2:7:
For the mystery of lawlessness is already at work; only he who now restrains will do so until he is taken out of the way.

Today, many theologians have identified Babylon the great, Revelation 18, as America, the great end time nation destined to be suddenly destroyed. Many refuse to believe this, even though America was once a righteous Judeo-Christian nation that has, for the most part, forgotten God.

Many people do not want to believe such a horrific event, the destruction of the United States, can or will happen. The reality is that MAD (Mutually Assured Destruction) is systematically being replaced with WSF (Whoever Strikes First). Russia leads the world in hypersonic nuclear missile systems. These missiles fly so fast that they are undetectable by radar or other missile defense systems.

If America is indeed Babylon the great of Revelation 18, what then will happen to the righteous people living in America when the judgment of America comes?

There is only one answer: the American Rapture. The American rapture is prophesied in Isaiah 18.

America (Babylon the great – Revelation 18) will be completely destroyed. Before that happens, there will be an American pre-tribulation rapture (Isaiah 18:5), which is a separate event that occurs before the world rapture. America’s destruction marks the beginning of the great tribulation period. Righteous Americans will be taken to Yeshua (Jesus) the Lord before the destruction of the nation occurs. Americans, those raptured and those left behind, will not be a people to identify the Antimessiah (Antichrist), receive the mark of the beast, nor will America be a nation that survives through the great tribulation. In this article Isaiah 18 will be [INTERPRETED], will identify America, and declare the American pre-tribulation rapture.

ISAIAH 18:1-7 (NKJV) [WITH INTERPRETATION]:
Woe [THE SECOND WOE OF REVELATION, THE DESTRUCTION OF BABYLON THE GREAT (AMERICA) – REVELATION 18] to the land [AMERICA] shadowed with buzzing (whirring HSV, NIV) wings [COMMERCIAL AIRPLANES], which is beyond the rivers of Ethiopia [ACROSS THE ATLANTIC OCEAN], which sends ambassadors by sea, even in vessels of reed [USS BATTLESHIPS] on the waters.

For so YHWH (the Lord) said to me, “I will take My rest, and I will look from My dwelling place [MY HOLY MOUNTAIN IN ISRAEL], like clear heat in sunshine, like a cloud of dew in the heat of harvest
[THE AMERICAN PRE-TRIBULATION HARVEST (RAPTURE) OF THE RIGHTEOUS AMERICAN SAINTS].”
For before the harvest [THE WORLDWIDE HARVEST (RAPTURE)], when the bud [TIMING] is perfect and the sour grape [THE HOMOSEXUAL GENERATION] is ripening [AGING] in the flower [AMERICAN MAINSTREAM CULTURE], He [GOD] will both cut off the sprigs [AMERICAN SAINTS] with pruning hooks [RAPTURING ANGELS] and take away [RAPTURE THEM] and cut down [DESTROY] the branches [MAINSTREAM SPIRITUALLY UNRIGHTEOUS AMERICANS].

In that time [OF BABYLON THE GREAT’S (AMERICA’S) DESTRUCTION] a present [THE AMERICAN RAPTURED SAINTS] will be brought to YHWH (the Lord) of hosts from a people [AMERICANS] tall and smooth of skin, and from a people [AMERICANS] terrible from their beginning onward, a nation [AMERICA] powerful and treading down [IMPOSING ITS WILL ON OTHER NATIONS], whose land [AMERICA] the rivers divide – to the place [HOLY MOUNTAIN] of the name of YHWH (the Lord) of hosts, to Mount Zion.

God does not judge the righteous with the wicked (Genesis 18:23-33).
God will rapture the American saints before He judges America.

JEREMIAH 50:12-13 (NKJV) [WITH INTERPRETATION]:
Behold, the least [LAST / YOUNGEST] of the [GREAT] nations shall be a wilderness, a dry land and a desert [A NUCLEAR WASTELAND]. Because of the wrath of YHWH (the Lord) she [AMERICA] shall not be inhabited, but she [AMERICA] shall be wholly desolate. Everyone who goes by Babylon [USA] shall be horrified and hiss at all her [AMERICA’S] plagues.

LUKE 21:36 (NKJV):
“Watch therefore, and pray always that you may be counted worthy to escape all these things that will come to pass, and to stand before the Son of Man.”

The United States of America is the last of the great significant nations. Righteous Americans will be the second people to stand before Yeshua (Jesus) immediately after the American pre-tribulation rapture (Isaiah 18:5). 144,000 righteous Israeli Messianic Jews will precede the raptured American saints to Yeshua’s (Jesus’) holy mountain, Mount Zion (Revelation 14:1-8) and will greet the arriving American raptured saints. The American people will not live through all of Scripture prophecy, because America’s destruction marks the beginning of the great tribulation. The Antimessiah (Antichrist) rises after America’s destruction and after the great tribulation concludes, he will reign for seven years and impose his 666 mark upon the people of the world (Revelation 14:8-11). Americans need to repent, live righteously, watch, and pray always to be counted worthy to escape America’s judgment through the American pre-tribulation rapture (Luke 21:6). The raptured American saints will be among the first people to stand before the Son of Man, Yeshua (Jesus) (Isaiah 18:7).

Illustrated version of this article:
THE AMERICAN PRE-TRIBULATION RAPTURE (ISAIAH 18)

Videos:
THE AMERICAN PRE-TRIBULATION RAPTURE; EMP ATTACK AND DESTRUCTION OF THE UNITED STATES

THE THREE RAPTURES, THE LEFT BEHIND, AND THE RESURRECTIONS OF THE DEAD

The Secret Meanings of the Parables of the Mustard Seed, Leaven, and Three Measures