Home/December 2021, Opinions/The Gifts of the Maji: Gold, Frankincense and Myrrh

The Gifts of the Maji: Gold, Frankincense and Myrrh

When they saw the star, they rejoiced with exceeding great joy.  —Matthew 2:10 KJV

And when they were come into the house, they saw the young child with Mary his mother, and fell down, and worshipped him: and when they had opened their treasures, they presented unto him gifts; gold, and frankincense and myrrh.  —Matthew 2:11 KJV

Jesus Christ’s birth in Bethlehem so many centuries ago is told in Matthew 1:18-25.  We celebrate his birth every December 25th and we rejoice that He came as the pure sinless lamb of God to shed His blood and bear our sins on Himself.  To those who understand the love of our One True God, Jesus was the greatest gift to all mankind.

In Matthew 2:11, it states, “Into the house…the young child.” These words need not indicate that the wise men came sometime after the birth of Christ.  The family would naturally have moved into a home as quickly as possible after Jesus was born, and “young child” can mean a newborn (John 16:21).  We also do not know how many wise men there were, but they came bearing gifts to the child, guided by the star in the East. When they reached the place of Christ’s birth, the star lingered above the newborn King.

Gold, frankincense and myrrh were gifts worthy of a king, and they were given as an act of worship. These valuable gifts were clearly intended to honor Jesus, but they carried deeper theological significance as well.

The early church Fathers understood the gold to be symbolic of Christ’s deity as King, the frankincense of His purity and priestly role, and the myrrh a prefiguring of His death (since it was used for embalming).

The Book of Isaiah, when describing Jerusalem’s glorious restoration, tells of nations and kings who will come and “bring gold and frankincense and shall proclaim the praise of the Lord.” (Isaiah 60:6).

Gold is a precious metal, always has been.  It is mentioned 417 times in the Bible and belonged to both religious and secular men as wealth and a currency.  Today’s equivalent to King Solomon’s gold is likely more than $60 trillion.  Gold represented kingdoms in both Daniel 2 and Zechariah 6.

Giving the gift of gold to the baby Jesus was symbolic of His kingship and blatantly stated by the Magi.  The gift of gold means Messiah Jesus was the King of Kings.  In Matthew 2:1-2 the Bible states, “Now when Jesus was born in Bethlehem of Judaea in the days of Herod the king, behold there came wise men from the east to Jerusalem, Saying, where is he that is born King of the Jews? for we have seen his star in the east and are come to worship him.”

(Herod told them to find Him because he too wanted to worship Him, but that was a lie.  Herod was an evil man and had even had members of his own family murdered.)

Because of its scarcity and immense value, gold was particularly associated with royalty and nobility, as is seen in 1 Kings 10 when the Queen of Sheba visits King Solomon bearing great quantities of gold as a gift. By bringing a gift of gold, the wise men showed that they did indeed consider Jesus a king.

Their gift of gold may have foreshadowed another aspect of Jesus’ ministry. Under the Old Covenant, the Most Holy Place (the Holy of Holies) was an inner sanctuary within the Temple where the priest would encounter the presence of God and offer a sacrifice of atonement for the sins of the people. Likewise, the incarnation of Jesus heralded the presence of God, Immanuel, and the sacrifice of atonement he would make on behalf of his people when he went to the cross. (Immanuel not only means “God with us,” but it is a Hebrew name that appears in the Book of Isaiah as a sign that God will protect the House of David.) The wise men may have had this connection in mind because, as described in 1 Kings 6:20-22, the walls of the Most Holy Place and the altar within it were completely overlaid with gold. 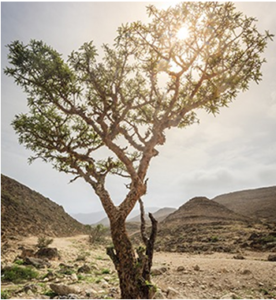 Frankincense has a distinct and lovely aroma.  It comes from a tree, grown in desert climates and those trees will actually grow out of cracks in rocks.  Frankincense grows naturally at the southern end of the Arabian Peninsula, and almost nowhere else.

Known as Boswellia in scientific literature, frankincense boasts a unique, rich history throughout the Middle East. Its legacy even spans into modern times, and into every corner of the globe. Beyond its elegant, low-flowing branches and bright, perky flowers, the frankincense tree produces a powerful resinous sap.Frankincense resin is valued for its uses in everything from religious incense and perfume, to decorative jewelry, toothpaste, deodorant, and even folk medicine.  We keep frankincense and myrrh as anointing oils.

The sap of frankincense has been a prized treasure throughout much of the world for thousands of years. At one time it was valued more highly than gold; frankincense is viewed by many as one of nature’s special blessings.

Incisions (“wounds”) are cut into the Boswellia tree, it is actually “pierced.” The tear-shaped droplets of sap that escape is carefully scraped off and dried. These “tears” solidify into an alluring mass of silver, golden, and amber colors that, in and of itself, are a sight to behold.They are beautiful. There are a multitude of uses, not just for scent, but for health purposes as well.  Studies show it even helps deter viruses.

The frankincense tree and its fragrant resin really is one of nature’s treasure with sacred significance, and shouldn’t be ignored, but it must be left to heal after it is pierced for sap or the tree will not recover.

As with gold, frankincense may also have an implied connection with the Temple worship of the Old Covenant. Burning incense at the altar was a key part of the sacrificial system prescribed by God for use in the Tabernacle and, later, in the Temple itself. According to Exodus 30, however, not just any incense would do. A specific recipe of spices mixed with “pure frankincense” (v. 34) was to be consecrated as “pure and holy” (v.35) and was the only incense permitted at the altar. A speculative parallel can be drawn between this and Jesus’ life as a pure and holy offering to the Lord. 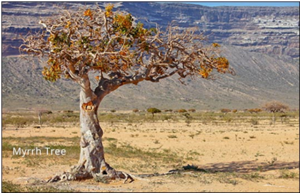 Myrrh is extruded from the gum of the Commiphora myrrh plant and was less expensive than frankincense, but was still highly valued and is referred to seventeen times in the Bible. It is first mentioned in Genesis 37:25, where it was being carried by camels in a caravan. Myrrh was used for a variety of purposes in biblical times as a perfume (Song of Solomon 1:13; 3:6; 4:6, 14; 5:1, 5, 13), an anesthetic, for burial embalming (John 19:39), as an ingredient in anointing oil (Exodus 30:23-25), and to deodorize clothes. According to Esther 2:12, it was also used for purification and in a cosmetic for women.

Perhaps the wise men intended this gift as an indication of Jesus’ humanity and the manner in which he would save his people—namely, that he would die for them (Isaiah 53:5).

We don’t know what Mary and Joseph did with the gifts brought to the newborn King, but we do know that an angel appeared to Joseph in a dream and told him to take Mary and Jesus and flee to Egypt. (Matthew 2:13)Herod’s rage overwhelmed him with an unfounded fear that Jesus would take over his throne.  He wanted to seek the young child and destroy him.

The journey to Egypt was long and it would take funds to escape, so the gifts to the child may well have served to travel to Egypt and save his early life.

It’s Christmas!  It’s a holy time, a time of celebration for the birth of our Messiah. It’s a time with family and friends, a time for joy, peace, love, sharing and giving.  We offer up gifts to those we love and care about and to those less fortunate; giving gifts freely because of the gift given to us by the Holy One of Israel.

May your Christmas celebration be filled with love, peace and thanksgiving.

Merry Christmas! And may the joy of His birth be with you throughout the new year.