The Magnificent State of The Union Address

Three years ago, we launched the great American comeback. Tonight, I stand before you to share the incredible results. Jobs are booming, incomes are soaring, poverty is plummeting, crime is falling, confidence is surging and our country is thriving and highly respected again. —President Donald J. Trump

One hundred and thirty-two lawmakers in this room have endorsed legislation to impose a socialist takeover of our health care system, wiping out the private health insurance plans of 180 million very happy Americans. To those watching at home tonight, I want you to know: We will never let socialism destroy American health care. —President Donald J. Trump

We terminated his evil reign of terror forever. (Qasem Soleimani) Our message to the terrorists is clear: You will never escape American justice. If you attack our citizens, you forfeit your life!  —President Trump

A special man, someone beloved by millions of Americans, who just received a stage 4 advanced cancer diagnosis. This is not good news, but what is good news is that he is the greatest fighter and winner that you will ever meet. Rush Limbaugh, thank you for your decades of tireless devotion to our country. —President Donald J. Trump

Of course, the socialist left has vilified the spectacular State of the Union address given by our President.  Donald Trump succeeds in making America and her people love him more with each passing day.  His true love of our country and her people emanate from this man in everything he does, but more so in the SOTU speeches he has given.  It’s about others, not about him.  The word “I” doesn’t keep popping up in his speeches as it did in our former president’s every utterance. 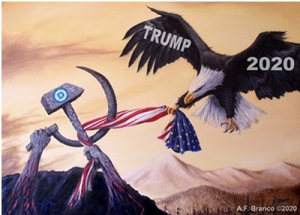 What shocks and dismays Americans who support the Office of the President as well as the person who resides there, is the defiance and hatred, the classless disrespect of the president Americans elected to represent them, all because he’s not one of their globalist elitists.  Not only are they churlish in their lack of civility, but they openly disdain every wonderful advance our President has made in the past three years to Make America Great Again.

The Democrat Party has become the Communist Party USA.  They have shown they have little to offer America or her people other than the desire to bring us down to the level of third world Marxist nations run by Communist dictators who bleed and destroy the very soul of their people.

President Trump gave one of his finest speeches to the nation when he told the many stories of those who love America and who have been saved because America helped them.

Medal of Freedom to Rush

On Monday, the 3rd of February, Rush Limbaugh announced on his program that he had been diagnosed by two major medical institutions with stage four lung cancer that had metastasized to other parts of his body.

President Trump asked Rush and his wife Kathryn to be at the State of the Union address.  Our President surprised Rush with the honor of the Medal of Freedom given to Rush by First Lady Melania Trump during the SOTU speech and the Democrats wouldn’t even clap. Watch this magnificent video and please watch Kathryn Limbaugh’s face…you can see the love and the pain in her face for her sweetheart.

It has been reported that Rush was brought into the House Chamber via wheelchair.  This tells us all that his prognosis has been in effect for a lot longer than he has told us.  Stage Four is in reality a death sentence.  The life span is at most eight months and I don’t believe there’s that long for our Rush Limbaugh. 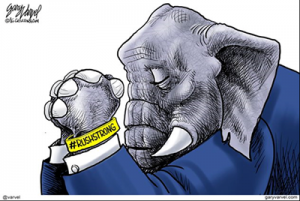 Without a miracle from our God, who Rush and family all worship and adore, we know we are going to lose one of the greatest men who has brought conservative talk radio to the forefront.  Two million listeners a day tune in to hear Rush’s take on politics, and if there was ever a time when we needed him, it’s now.  I haven’t agreed with everything Rush has said, but I know he steers the audience to truth, and I’ve seen him in person and he is one magnificent speaker.

I watched as Rush’s wife Kathryn looked at him when it was announced that First Lady Melania would give him the Medal of Freedom.

I saw in her face, her love for him and the knowledge that Rush is dying and without a miracle from God Almighty, he will be lost to us.  Heaven will rejoice, and we will mourn.

A good, perhaps great life, albeit short, has been lived by a man who tried to help keep America great. Pray for him, and pray for his family…losing Rush truly is a great loss to America.  God does supply miracles…pray for one!

Here is the list of the many beautiful guests President Trump invited and honored at this 2020 State of the Union address.

How magnificent…to see the great, great grandson of a hundred-year-old Tuskegee Airman…a black man whose team guarded the pilots carrying bombs, they were trained for aerial combat. They are the real heroes and history has recorded them as such.  Now, the great, great, grandson of this Airman is working to join the Air Force Academy and eventually going to space.

From a mother who wanted the very best education for her only daughter, to a man who lost his beloved brother because of a criminal illegal alien, to a reunited family with the soldier who is at war and not with his wife and children, to parents who lost their daughter Kayla to a terrorist…a menace to the world who was eliminated by the orders of our Commander in Chief.  And to so many more, even a baby who is now a healthy two-year-old who survived despite being born at 21 weeks gestation.  And a veteran who came home with Post Traumatic Stress Disorder (PTSD), who ended up on drugs and then because of a Trump program, got clean and is now reunited with his family and holds a great job.

Here is the full video of the State of the Union 2020 address.  You will have to watch it twice because of the distraction of Speaker Pelosi’s classless disrespect for the Office of President of the United States.

The mainstream media is saying that the President snubbed her by not shaking her hand when she extended it.  He didn’t shake hands with the Vice President either, and personally why would he want to shake hands with someone who has led the House to impeach him.

As if it wasn’t bad enough that Pelosi would not stand or clap for the achievements of our President, she wouldn’t even applaud or stand for the many guests who were featured by President Trump.  She disgraced herself, and her Party for leading them in a “deplorable” attitude of disdain toward the President of the United States, and the 63 million Americans who elected him.

We watched as she shook her head when he made statements she didn’t like.  We watched her tongue run around her mouth in distaste for the truth our President presented, and we watched her speak to Vice President Pence who ignored her as he was listening to the President.  We watched her as she stared at her comrades in the Democrat Party, who like her wore white. They claim the wearing of white pays homage to the women’s suffrage movement that led to the ratification of the 19th Amendment in 1920, which guaranteed women the right to vote.  What hogwash!

But Speaker Pelosi, your petty and vicious acts of hatred in front of the horrified and dismayed invited guests, and the millions of American citizens who watched you tear up the four pages of our President’s speech…this went beyond evil…this was an atrocity born only of mediocrity and hatred, of rudeness by a person of ill-bred graceless incivility and black hearted wickedness. 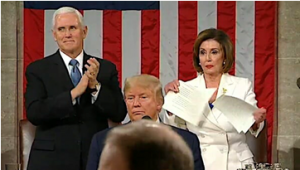 Union address before she would later rip it up at the end of his speech.  She literally tore in half each sheet of the Commander in Chief’s State of the Union address on national TV at the conclusion of his remarks Tuesday night.  This is one of the most classless acts ever done at the State of Union.  She was unmoved by the American stories our President presented.

Pelosi ripped up one of our last surviving Tuskegee Airmen. She ripped up the survival and growth of a beautiful little girl. She tore up the mourning families of Rocky Jones and Kayla Mueller. She shredded a soldier’s reunion with his family and she pulverized the glory of the Medal of Freedom given to the number one talk radio host who is now in the fight of his life.

That’s her legacy.  She is filled with demons of hatred for Americans and America.  Speaker Nancy Pelosi should be forced to resign, she has overstepped all bounds of decency.

On Wednesday, the Senate voted to acquit the President for the fraudulent impeachment led by Nancy Pelosi.

Willard “the rat” Mitt Romney was the only Republican who voted against acquittal for the unethical impeachment of this great President. Although President Trump was innocent of anything improper, Romney hates him despite the fact that Donald Trump supported him both when he ran for President and for the Senate.

Republican Utah state Rep. Tim Quinn has introduced a bill in that state’s legislature that would allow voters to recall U.S. senators — a possible swipe at Utah Senator Romney, despite Quinn saying the bill isn’t targeted at anyone in particular.Let’s hope it passes.

Pray for our President, pray for our country, and pray for Rush Limbaugh, his wife and his family…