Home/February 2020, Opinions/The Prosecution of Roger Stone By an Overzealous and Politicized Justice Department

The refusal to take sides on great moral issues is itself a decision.  It is a silent acquiescence to evil.  The tragedy of our time is that those who still believe in honesty lack fire and conviction, while those who believe in dishonesty are full of passionate conviction.  —Bishop Fulton J. Sheen

There may be times when we are powerless to prevent injustice, but there must never be a time when we fail to protest. —Elie Wiesel

Every time we witness an injustice and do not act, we train our character to be passive in its presence and thereby eventually lose all ability to defend ourselves and those we love. — Julian Assange

President Trump tweeted minutes after Stone’s conviction, “Now they have convicted Roger Stone for lying to Congress and want to give him a long prison term. What about Crooked Hillary, Comey, Strzok and Page who helped launch Crossfire Hurricane, McCabe, Brennan, Clapper, Schiff, Ohr, Steele and Mueller himself who all lied and have not been prosecuted. This is double standard like never seen before in our country.”

No charges against any of them, or any charges against the treachery committed by Hillary Clinton whose home server was hacked in real time by Red China and other foreign nations for classified government documents.  And corrupt cop Comey set her free on the request of Attorney General Loretta Lynch who met with Bill on the tarmac in a Phoenix airport.

The President is right, all of them lied under oath to Congress about consequential matters.  Yet, Judge Amy Berman Jackson specifically prohibited Stone defense lawyers from arguing that Stone’s case was one of “selective prosecution.” (Trump suggested a pardon for Mr. Stone after he heard the harsh and drastic punitive sentencing.) 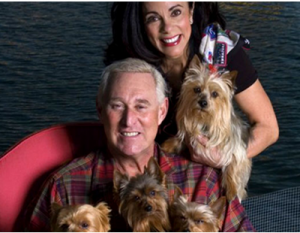 The Stone prosecution is a disgrace, it’s lawless, and it was rigged from the beginning.

Judge Jackson put Paul Manafort in solitary confinement for nine months before he was even convicted.  At his age, the man was sentenced to die in prison, and that’s what they want to do to Roger Stone.  The prosecutions’ recommendation of seven to nine years for a 67-year-old, non-violent first offender has finally revealed Robert Mueller’s prosecution team for the corrupt Deep State monsters they are.

Stone did nothing that was of a criminal nature that threatened the people of this country or violated the laws that helped the Trump campaign win an allegedly “illegal election.”  His only crime was supporting Donald J. Trump for President, just like Lt. General Michael T. Flynn, Paul Manafort, Carter Page, George Papadopoulos, and so many others.

Roger Stone was charged with obstruction of justice and making false statements to the special counsel. Significantly, the alleged false statements specified in the indictment were about conduct, which, if admitted, was not criminal.

On January 23, 2019, Mueller’s office illegally leaked Roger Stone’s indictment, written by Andrew Weissmann, to CNN. The illegal leak is a bigger crime that carries a heavier penalty than what Stone was charged with. See the entire Mueller timeline.

Mueller’s witch hunt was closed last May, although several prosecutors had remained behind to handle cases like Stone’s — prompting conservative commentators to openly wonder if politics had motivated their desire for an especially harsh sentence for Stone.

President Trump withdrew his nomination of Liu to serve as a top Treasury Department official. She had worked in Justice during the Bush administration and became a member of Trump’s transition team and was appointed U.S. Attorney for DC.

Last year, AG Barr tried to promote her to the number three slot in justice, but that plan was thwarted by Senator Mike Lee. As it turned out, Liu was a pro-abort and she had opposed the confirmation of Samuel Alito. Senator Lee and AG Barr actually got into a shouting match when Liu was blocked for not being conservative.

The president’s move to withdraw Liu’s nomination comes just hours after four Justice Department lawyers quit following a move by senior leaders at the department to overrule the prosecutors’ judgment by seeking a lesser sentence for long-time Trump ally Roger Stone after he was found guilty of lying to Congress.

Timothy Shea is a former close adviser to AGBarr.  As a top Barr aide, Shea helped manage the Epstein crisis and oversee the lingering Mueller Cases in D.C.As explained in my previous article, the entire Mueller drama was unnecessary and everyone knew it; the goal was to destroy those who had supported Donald Trump in order to discredit him.

Front-line prosecutors, two previously with Mueller’s team, argued for a sentence on the higher end for Stone than some of their supervisors were comfortable with, according to people familiar with the discussions. Just as interestingly, the newly appointed U.S. Attorney, Shea, approved this aggressive stance, though not without some pushback.  The judge actually does the sentencing, the prosecutors only suggest punishment.

Four career DOJ prosecutors, abruptly resigned from their posts on Tuesday, February 10th in an apparent dramatic protest just hours after senior leaders at the DOJ said they would take the extraordinary step of effectively overruling the prosecutors’ judgment by seeking a lesser sentence for President Trump’s former adviser Roger Stone.

Jonathan Kravis, Aaron Zelinsky, Adam Jed and Michael Marando all withdrew.  Jed and Zelensky were prosecutors who worked for Robert Mueller.  All four quit in a crybaby huff because they weren’t getting their way.  Well, good riddance!

After the withdrawals by other attorneys, the DOJ’s new sentencing memo in Stone’s case was signed only by John Crabb Jr., the acting head of the criminal division of the U.S. attorney’s office in Washington, DC.

Former acting Attorney General, Matt Whitaker said, “There is no precedent for a harsh sentence recommendation for Roger Stone.” The sentencing judgment was draconian for the conviction.  The average time a rapist spends in prison is four years, an armed robber serves three years and for violent assault, one and half years. Link

Nowhere on the web can anyone even find what Stone lied to Congress about! The prosecution’s desire to imprison Stone for seven to nine years is more than vicious, it’s despotic.

The democrats went into their typical Trump Derangement Syndrome hysteria and threatened another impeachment with Schiff accusing Trump of an “abuse of power.”

Speaker Pelosi, (D-CA) repeated the tired and preposterous meme.  Rep. Eric Swalwell, (D-CA) a chronic impeachment enthusiast, refused to rule out another attempt to remove Trump from office.  The unhinged harangues were all predicated on a brazen assumption that Trump had directed AG Barr to overrule the trial prosecutors and recommend a more appropriate and equitable sentence for Stone, which by the way, he has the right to do.  The deranged left is angry at Trump for exposing the wrongdoing.

Pelosi’s gang of psychotic lunatics are now using Barr as a political punching bag, and unfortunately Trump’s tweets made it worse.

AG Barr publicly complained that Trump’s tweets make it difficult for him to do his job.  He told ABC News, “I’m not going to be bullied or influenced by anybody … whether it’s Congress, a newspaper editorial board, or the president.Well, as you know, the Stone case was prosecuted while I was attorney general. And I supported it. I think it was established, he was convicted of obstructing Congress and witness tampering. And I thought that was a righteous prosecution. And I was happy that he was convicted.” Well, if Barr thinks this is a righteous case, then where are indictments for McCabe and Comey?  AG Barr stressed, however, that the president never asked him to interfere in the criminal case against Stone, a longtime friend of the president.

Barr was disrespectful of our president and his first amendment rights; Donald J. Trump is the boss, not Bill Barr. Tweeting is how the President communicates with the American people.  The AG should have had a private meeting with President Trump rather than voicing his disapproval publicly. Link

A prime example of two-tiered justice is the reason the president withdrew his nomination of Jessie Liu. During her time as U.S. attorney she helped a man by the name of James Wolfe get away with leaking classified information and ultimately lying to the FBI.

Wolfe was the former security director for the Senate Intelligence Committee. He was indicted in 2018 for leaking info to four journalists including one with whom he was having an affair.   He lied to the FBI and according to his indictment Wolfe picked up a highly classified document on the 17th of March to take to the intel committee.  A later FBI sentencing recommendation confirms that that document contained the first two Foreign Intelligence Surveillance Act (FISA) warrants for Carter Page and was the foundation for accelerated “Spygate.”

So, what happened to James Wolfe?  He was never charged with leaking classified information.Politico reports that during the lame duck session after the 2018 midterms, Senators Warner, Richard Burr and Diane Feinstein asked for leniency in his case and that’s where Jessie Liu comes back into the case. Link

Also, on March 17, Democratic Senator, Intel committee chairman, Sen. Mark Warner texted Christopher Steele’s attorney, Adam Waldman, that he was “going into the skiff.” (The skiff is a secure room.) What did they talk about?  March 17th is also the date stamped on the released FISA warrants that allowed the spying to begin on Carter Page.  And from that, it is fair to say that James Wolfe took custody of the Carter Page FISA applications and delivered them to the skiff where they were reviewed by Senator Warner and then leaked to the press by James Wolfe.

It was Deputy AG Rod Rosenstein and U.S. Attorney for DC Jessie Liu who were the decision-makers. U.S. Attorney Jessie Liu dropped most of the charges against Wolfe; she allowed him to plead guilty to only one count of lying to investigators.  Wolfe served exactly two months in prison.  Did Liu help coverup the Wolfe case?  It sure looks like it. Remember, two months in prison.  The President has pulled the nomination of Jessie Liu, and it’s not because of Roger Stone.

The disparity in treatment of those connected to President Trump is shocking when one considers the leniency to James Wolfe via the democrat senators requests.  Consider that none of the people responsible for the phony Russian collusion story have been prosecuted.

IG Horowitz determined that officials at the FBI and Justice Department deceived the Foreign Intelligence Surveillance Court and obtained illegal warrants without probable cause in order to spy on a Trump campaign associate. So far, no one has been held accountable.

And oh yes, it was Roger Stone who came up with Make America Great Again (MAGA)!  On September 16, 2011, Roger Stone, Trump’s longtime political advisor and a veteran of Reagan’s 1980 campaign, tweeted the slogan, “Make America Great Again -Trump Huckabee 2012. ”Two months later, in December 2011, Trump made a statement in which he said he was unwilling to rule out running as a presidential candidate in the future, explaining “I must leave all of my options open because, above all else, we must make America great again.”