The Scary Similarities Between FDR’s New Deal and the Coronavirus

“The New Deal is plainly an attempt to achieve a working socialism and avert a social collapse in America; it is extraordinarily parallel to the successive ‘policies’ and ‘Plans’ of the Russian experiment.  Americans shirk the word ‘socialism’, but what else can one call it?”  —H. G. Wells

In 1933 when Franklin Delano Roosevelt (FDR) was elected president in the beginnings of the Great Depression he said, “I will wage war against this emergency as though we were in fact invaded by a foreign foe.”  He did just that and in many cases without regard to the 17 enumerated powers as contained in Article I, Section 8, Clauses 1 through 17 of the U. S. Constitution.

The very next day, FDR declared a 4-day bank holiday to stop people from withdrawing their money from banks that were on the brink of failing.  (And you think the money in your bank is your money!) A few months later FDR took America off of the gold standard and American currency was backed up by nothing, except the alleged full faith and credit of the American government.  It was hardly a reassuring act.  The gold standard still does not exist today.

During the Great Depression, that many believe was caused by the Federal Reserve, millions of Americans lost their jobs, their life’s savings, their homes and some their lives.  Something had to be done to save the country but did that something go beyond government’s enumerated powers?  The answer is a resounding yes! 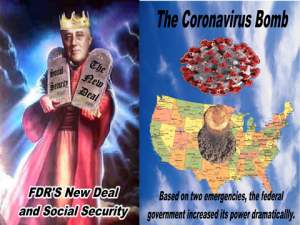 Besides creating the Civilian Conservation Corps, the Civil Works Administration, the National Industrial Recovery Act, the National Labor Relations Board and the Social Security Administration under the New Deal, he got Congress to pass sweeping banking regulations like the Glass-Stegall Act in June of 1933.  Under the Glass-Stegall Act, the Federal Deposit Insurance Corporation was created, which was supposed to protect bank deposits when banks failed.  FDR went on to force workers into unions.  He blatantly and openly used the IRS against his enemies, as did Obama.

Within the New Deal were new agricultural programs that provided subsidies to farmers for not growing certain crops, or not raising specific livestock like dairy cattle.  Many of those farm subsidies are still active today.

The conservative wing of the U. S. Supreme Court gave FDR all kinds of negative decisions on many of his programs.  They declared eleven (11) of FDR’s 16 alphabet laws unconstitutional.  To get even, FDR threatened to pack the Supreme Court with more justices.  The conservative justices took the threat to heart and came around to FDR’s thinking.

In FDR’s speech to the Congress in January of 1934 FDR said, “It is to the eternal credit of the American people that this tremendous readjustment of our national life (read, expansion of government power) is being accomplished peacefully.”  The American people forgot their Constitution and rolled over.  By stealth and unconstitutional legislation, the Federal Government, under FDR, increased its powers way beyond constitutional limits and the people seemed none the wiser and in many cases, grateful.  Once again, WE THE PEOPLE and individual freedom were the losers.

FDR took us from a nation built on the foundation of unalienable rights and individualism, straight into social collectivism (socialism) in an unprecedented expansion of the welfare state and massive government intervention in the American economy.

In all effects, FDR became king of America with a virtually permanent Democrat Congress at his beck and call.  When he won an unprecedented fourth term in 1944 and then promptly died, the GOP-controlled Senate at that time, couldn’t wait to limit presidential terms to two, four-year terms under the 22nd Amendment.  With the help of some southern Democrats, the Amendment passed the Senate.  The U. S. House followed suit and the Amendment was finally ratified by the states in February of 1951.  So ended the reign of King FDR whose immeasurable influence is still with us today.

Yes, there have been other emergencies since the Great Depression, but those emergencies paled in comparison to the emergency that took place in the late winter and early spring of 2020, when Communist China unleashed the Coronavirus on an unsuspecting world from what may have been the accidental or purposeful release of the virus from a Wuhan bio laboratory.

All around the planet, people began to get sick and die by the tens of thousands and then by the hundreds of thousands.  The science of the virus was almost non-existent since China chose to keep it secret.  Without adequate science, world governments went into action and started forcing people to stay in their homes in what could only be described as a massive lock down, just short of martial law.

Sweden on the other hand, went against the prevailing wisdom and did not shut down their country.  It turns out that Sweden’s constitution does not allow the declaration of a national emergency.  In Sweden, freedom of movement is a fundamental right.   Still, Sweden was significantly impacted by the virus.

Nevertheless, the net result of the planet-wide lock down stopped international and national airline, ship and train travel.  Cruise ships became instant incubators of the virus and the passengers became trapped at sea where the virus spread rapidly.  Tens of thousands of businesses were forced to close.  In America, over 40 million lost their jobs, virtually overnight.  Meeting and large groups were banned.  All high school, college and professional sports terminated their seasonal training and scheduled games.  The stadiums were empty.  The people couldn’t pray in their churches.  Streets were deserted.  Restaurants closed their doors.  Theaters were shuttered.  Bankruptcies started piling up.  Rents, on a massive scale, went unpaid.   Food banks had trouble meeting the demand.  Hospital rooms started filling up and our children were sent home from public schools and colleges, perhaps never to return.

Noted scientists pontificated about the virus and offered advice to world leaders, which translated into new laws and policies.  The pontifications and advice would change over time, sometimes dramatically.  “Congregate” and “don’t congregate”, along with “don’t wear a mask”, “wear a mask,” littered the airwaves.  The people were confused but complied with the government shut down edicts and mandates anyway.

Governors and mayors got into the act and issued local mandates.  Some states locked up, some states didn’t.  State and local politicians took on powers that suspended constitutionally protected rights.  The Mayors of New York and Los Angeles have gone to extraordinarily punitive measures to control the virus.  New York’s mayor has set up roadblocks entering the city while allowing crime to race out of control.   The mayor of Los Angeles has threatened to cut off the water and electricity to homes and businesses that violate the strict orders.  Protests are allowed but churches must remain closed.

It turns out that in the name of “Public Health and Safety”, government believes it has the power to override all other laws.  The Bill of Rights was tossed into the trashcan.  The Constitution died in the spring of 2020.  (See:  “The Slow, Torturous, Silent Repeal of the Bill of Rights”)

The Congress and the Federal Reserve pulled out all the stops in order to blunt the effects of a potential economic collapse.   Massive stimulus packages were passed in Congress and signed by the President, to the tune of $2 Trillion.  Congress is now considering another stimulus package of from $1 Trillion to $3 Trillion to buy more votes during an election year.  The Federal Reserve took unprecedented actions, in the trillions of dollars, to maintain liquidity.  The national debt rose from $23.5 Trillion to $26.5 Trillion almost overnight.  The national debt is now 1.3 times America’s Gross Domestic Product at $20.54 Trillion   The income and net worth of every American is the collateral for this debt but there is no way that it will ever be paid back as it continues to rise into the stratosphere.

Many Americans vehemently objected to the new health rules and went to court, but the courts have mostly upheld the emergency powers of the government leaders and politicians.  Businesses that defied the shut down orders had their business licenses revoked, or were arrested and thrown in jail.

Once again, the federal government used a national emergency to increase its powers and authority, to the detriment of the people’s rights.  Once again, the people laid down and played dead like good little compliant robots, just like they did under the reign of King FDR.  Should they express outrage at their loss of freedom, they have only them selves to blame.

The Clinton Administration got into the act of increasing executive power by forming the “President’s Council on Sustainable Development”, which had the effect of codifying into law the policies of UN’s Agenda 21, adopted by most UN nations, including the U. S., in 1992.  The radical Agenda 21 environmental policies were never debated or ratified by the U. S. Congress, as required by the U. S. Constitution.  Such policies are an affront to American sovereignty and constitutional rights, including property rights.

Obama cronies in the FBI, DOJ, CIA and NSA were complicit in a silent coup d’etat against incoming President Trump whom they hated, exceeding all of their powers, ethics and department policies.   Trump, in their minds, was a threat to their well-established, corrupt, highly lucrative establishment.  Will they pay a price for breaking the law, or will their law breaking become business as usual in the U. S. Government?  We shall soon see if the Durham report is ever made public and high-level government officers are indicted, convicted and sent to jail.  We don’t suggest holding your breath in anticipation of such an outcome.

Thomas Jefferson wrote 200 years ago that, “Experience hath shown that even under the best forms of government those entrusted with power have, in time, and by slow operations, perverted it into tyranny.”

American local, state and the federal government have, in the last 100 years, proved that Jefferson was uncannily right.  Using stealth, backroom deals, unconstitutional legislation and national emergencies, government tyranny, corruption and expansion of powers have now become the norm not the exception and the people have become slaves but are totally oblivious to their enslavement.

America has endured many emergencies since the signing of the Constitution but manages to avert disaster each time.  However, in the process of addressing those emergencies, government takes more and more control of our lives.  If government has no intention of fulfilling its obligation to preserve, protect and defend individual freedoms and the Constitution, America will just be another nation that toyed with freedom but couldn’t hold onto it because the people refused to maintain constitutional restraints on government.