The Takedown Of Julian Assange: An Existential Threat To Independent Media

I’d almost ceased writing commentary except for occasional notes on my philosophy blog. Most of what I’d been writing seemed to fall on deaf ears, and I was weary of it.

Plus, the need to start a business to ensure my small family’s financial survival has consumed a good bit of my time for over a year now.

The Julian Assange takedown last Thursday brought me up short. Even though I’d seen in coming.

What I see now is an existential threat to independent publishing and alternative media of whatever sort.

Should it turn out that the British can arrest, and the U.S. can extradite, an Australian citizen, web publisher, and journalist for violating U.S. secrecy laws from well outside U.S. borders, this will establish a precedent that should send chills up and down the spine of every truth-teller in the world, everywhere.

Nothing justifies extraditing Assange to the U.S., unless the long arm of the U.S. government became the arm of a world government while I wasn’t looking.

Everybody knows the basics: Assange started WikiLeaks in 2006, and by 2010 the site was making waves as the major outlet for information the Deep Establishment did not want known.

It should be emphasized that WikiLeaks released material received from then-Bradley (now Chelsea*) Manning implicating U.S. troops in Iraq in what might have been judged to be war crimes if they’d been committed by anyone other than the U.S. or Israel (good WikiLeaks timeline and details here).

Manning did seven years in prison as a de facto political prisoner before then-President Obama commuted his sentence, which had originally been for 35 years.

In 2016, WikiLeaks released the DNC and Podesta emails which became one of the bulwarks of the Russian collusion narrative — a narrative now dead in the water.

Assange denied, and continues to deny, that his source was Russian intelligence.

Direct physical evidence refutes the common claim that the DNC server was hacked, as opposed to illicitly accessed and the emails downloaded onto a thumb drive by someone on the inside (here and here).

This evidence has been ignored. But never mind that now. 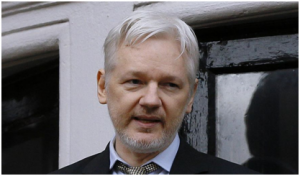 Assange appears to have been “targeted for termination” (so to speak) back in 2010.

I do not know if he was somehow set up in Sweden, or if the allegation of sexual assault was simply fabricated. Either is possible. What I doubt is that he’d make himself vulnerable by doing something so breathtakingly stupid.

The timing is suspicious: WikiLeaks released the video of the Apache helicopter assault just months before as well as other info on torture of Iraqi prisoners of war by U.S. troops, the level of civilian casualties in both Iraq and Afghanistan, etc.

So my working assumption is that the Swedish allegation is a hoax. Anyone paying even the slightest attention over the past decade knows that such hoaxes happen.

Assange knew he had incurred the ire of powerful people based in the U.S. He figured they wanted him. Obama was their current bought-and-paid-for lackey. So he defied the British and took refuge in the Ecuadorian Embassy where he was given asylum. Ecuador’s then-president Rafael Correa was sympathetic, and even eventually granted him Ecuadorian citizenship.

A converted office became Assange’s home for the next six years and ten months, as his passport had been revoked and there was no physical means of getting him out of the U.K.

In early 2017, Ecuador underwent a change of leadership. New president Lenín Moreno, far more U.S.-friendly, saw the Assange situation as a “stone in his shoe.”

Assange’s Embassy life soured. His Internet access was cut, and visits by supporters were curtailed. For all practical purposes, he was in solitary confinement — which many have concluded is a form of torture. Apparently his personal habits and living conditions went downhill. Ecuador accused him of violating the terms of their agreement and withdrew his asylum.

This freed the U.K. to move against him. To them, he’d skipped bail when seeking asylum with Ecuador. The U.S. had bigger fish to fry. The reason he’d sought asylum, after all, was not fear of the Swedish allegation but his certainty it was a cover for a planned U.S. extradition.

On Thursday morning, April 11, it went down.

The man they removed had visibly deteriorated. Watch for yourself.

Assange is in custody in the U.K. Now what?

The U.S. accuses him and Chelsea Manning of trying to hack the password of a federal computer. There are indications of other charges, as of this writing undisclosed.

Manning is again locked up for refusing to testify in a secret hearing before a grand jury investigating Assange. This preceded Assange’s April 11 arrest by less than a month — a dead giveaway something was up.

We’ll see if Assange is brought forcibly to the U.S., given a show trial, and thrown into a deep dark hole.

Or found dead with at least two bullet holes in the back of his head, and authorities rule it a “suicide.”

The larger question: are we about to see the murder of independent journalism — alternative media — before our eyes?

But so far, independent media has survived!

Truth always does, one way or another!

Alternatives to official outlets continue to be “stones in the shoes” of those who would take us into their techno-feudal future.

Such voices have been annoyances to authoritarian power since the Gutenberg Press was invented, and since Martin Luther distributed copies of his 95 Theses in Wittenberg and started the Protestant Reformation — showing what one dissenting and highly resourceful voice could accomplish.

For the past 12-and-a-half years, the most resourceful dissenting voice has belonged to Julian Assange.

Hence the incentive to make an example of him.

If he ends up incarcerated for a long period of time, or dies suspiciously in custody, it will strike fear in the hearts of independent thinkers, writers, and publishers everywhere.

Keep in mind: Assange is not a U.S. citizen, has never been to the U.S., wanted nothing to do with the U.S. beyond exposing the malfeasance of its war machine. We see how Assange’s case could serve as a precedent: journalists and writers anywhere in the world can be set up, arrested, and extradited if those in power deem them a threat.

The number of truly independent truth-tellers has dwindled over the years. Those I know of would fit in my front room.

The journalism profession as a whole — like academia — sold out long ago. All one has to do to see the level of shilling is turn on CNN or MSNBC or any major network, possibly except Fox News some of the time. As for the latter, folks like Sean Hannity and Tucker Carlson have suffered personal attacks in this era of hoked up accusations of “sexual misconduct” and bogus allegations of “racism.”

What we won’t see is another WikiLeaks to expose the powerful and challenge dominant narratives.

It will be extremely interesting to watch what Donald Trump does. What we’ve seen so far isn’t encouraging.

Candidate Trump told his supporters, “I love WikiLeaks!” and “WikiLeaks is incredible!”

President Trump, upon being informed of Assange’s arrest, replied timidly that “I know nothing about WikiLeaks, it’s not my thing….”

Don’t take my word for it.

Has Trump become just one more lackey with a selective memory?

We’ll find out, probably before the 2020 election, whether Trump has been sufficiently compromised that the struggle against Deep Establishment globalism directed from the City of London and within the U.S. corporate-state complex is, for all practical purposes, over, at least in the U.S.

So that the march to techno-feudalism can get back to business as usual in the 2020s.

It won’t be easy — for the techno-feudal globalists.

For resistance exists not just on Main Street, U.S., but right there in the U.K. (Brexit!), in France (the Yellow Vests), and in Hungary and Poland where voters have put anti-globalists in their presidencies. Greece has been crushed by “austerity”; Italy is disintegrating.

EU-type systems simply don’t work! Unless you’re a center banker, financier, or other corporate-state globalist interested only in money and power: the telos of the materialist worldview that has dominated the European mind (and power centers) for over two centuries now, and has increasingly come to dominate the U.S. mind.

I don’t know what Julian Assange’s personal worldview is. I don’t know if he’s given the matter much thought. I am sure God has used him, and is using other truth-tellers.

The Lord of Hosts clearly left us a Remnant, and it is alive throughout the world!

It was never God’s plan for humanity to create a functional world regime, which may be one of the reasons the EU has turned into an utter disaster.

Globalism may win a few battles here and there, but in the end, it cannot win the war.

Although because of our sins, ranging from the de facto apostasy of mainline churches to the U.S.’s truly horrendous crimes (think: 63 million unborn babies and counting!), we may be in for a very rough ride before the Lord returns to set things right!

*It should go without saying that Bradley/Chelsea Manning’s “gender dysphoria” is neither here nor there so far as this matters discussed here are concerned. Gender confusion does not preclude knowledge of right vs. wrong. What he/she did back in 2010 was highly courageous, even if it resulted in severe punishment, including life-threatening periods of solitary confinement. This is what we ought to expect from the military wing of a society based on authority structures instead of freedom.

Steven Yates, PhD., has started Copywriting Solutions. He is the author of Four Cardinal Errors: Reasons for the Decline of the American Republic (2011). He lives in Santiago, Chile, with his wife Gisela and their cat Princesa. His next book What Should Philosophy Do? A Theory should be completed soon. Email: freeyourmindinsc@yahoo.com. He blogs at https://lostgenerationphilosopher.com.

If you wish to make a donation to NewsWithViews.com, go here. This article was done for free. If you think its content is of sufficient value as to merit compensation, please go to PayPal and make a one-time donation of $5, $10, $25, $50, or whatever you think the article might be worth, via my email address above. (I’ve ceased using Patreon as I’d ceased writing the commentary that account was created to support.)

About the Author: Steven Yates

Steven Yates is an independent scholar and author with a doctorate in philosophy. He is the author of the books Civil Wrongs: What Went Wrong With Affirmative Action (1994), Four Cardinal Errors: Reasons for the Decline of the American Republic (2011), and the ebook Philosophy Is Not Dead (2014). He is an expatriated American living in Santiago, Chile, with his wife (a chilena) and their two cats, Bo and Princesa. He owns Final Draft Editing Service, which caters to Chilean academics needing editorial oversight with their English (although he accepts U.S. clients as well as clients from elsewhere around the world). He is currently completing his first novel, to be entitled Reality 101, to be published later this year, while continuing with nonfiction projects such as The Fifth Stage of Civilization and others. Dr. Yates occasionally blogs about philosophy and related matters at https://lostgenerationphilosopher.wordpress.com, and has just joined Patreon.com: if you find his writing valuable and important enough to be worth your financial support, please consider visiting the site and making a contribution (free books and possibly more are in the offing). He might also be building his own house soon. Please consider supporting my writing on Patreon.com Buy ebook PHILOSOPHY IS NOT DEAD Buy my book FOUR CARDINAL ERRORS In progress: REALITY 101 (a novel); THE FIFTH STAGE OF CIVILIZATION (Beyond the Postmodern & Into the Future) Check out my blog: LOST GENERATION PHILOSOPHER Does your manuscript need an extra pair of eyes? Click Here