Home/July 2018, Opinions/The UK Is Leading The Way In The ‘Absolute’ Loss Of Moral Values And Faith

Many British people, concerned about the state of our nation, mistakenly believe that it is the United States of America which has led the United Kingdom down a decadent road of destruction in relation to our moral values.

Believing that they have taken us away from some of our foundational roots which were once grounded in solid Christian principles, you can be certain when anything goes wrong, and when we see an increase in violence, an uptake in drug use, or a slide down a shady grey road of more promiscuity, there will be some who will point a finger across the Atlantic to where the pilgrim fathers once set sail and blame it all on the Americans.   It’s easier that way.

Sure, we happen to have adopted an insatiable taste for your ham-burgers as well as a love for your westerns, and a penchant for the freedom expressed by a ride on a Harley Davidson along the open plains of an Arizonan desert; and for some, in more recent days, we have become decidedly taken by the messages that are being provided by American televangelists who have imported their best life now to our screens. 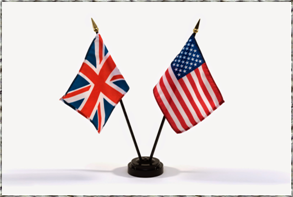 many of our sentences. Like we know what we are talking about. Yes, the yanks have a lot to answer for. But, ya’ll watch carefully now. British Values have not been tainted by America; they have been tainted by a non-judgemental multiculturalism which has been focused on changing attitudes and feelings towards others rather than valuing and protecting our own Christian heritage first.   Leading and opening the door into our demise, has been the British establishment themselves, supported by some leaders in the Anglican Church. We have been considerably polite to everyone else but have never stood up or set boundaries for ourselves.

To my knowledge, America is still a few years behind us attempting to stem off the tide of destruction against the same formidable enemy affecting all areas of the American way of life.

Over the years I have been very fortunate to meet people from America who are still standing up for the truth. In fact, it was almost 20 years ago when I found myself very alone in a church which was sliding down the road of complacency that friendship and help came from what we also once called a bright light on a shining hill. America. It was a strange experience at that time to find myself working in a traditional parish church yet finding the confirmation of the truth which was being revealed to me via correspondence and telephone calls, from America. God has mysterious ways of answering prayers, but he surely sent a friend one day from the best place there is.

Consequently, over the years it has been of tremendous relief to visit American sites such as News with Views and also make friends with other like-minded searchers of truth. Some of the greatest encouragers that I know have always come from America.

I possess a beautiful Ryrie Bible which unexpectedly arrived in the post one day some years ago from Kelleigh Nelson who writes for this site, and as a result of my writing have also made a few friends across the UK who have also become very disillusioned with the church and the state of our country.

Today, many British people will still find either their information, or their confirmation, revealed to them from the more honest and inquisitive minds of America. Many Americans still highly value their independence and their right to speak up and speak out, to a much higher degree.

Recently, I was also able to also meet up with a minister and his wife from Perry in Georgia, Wayne and Linda Edwards from Heritage Baptist Church.

Through mutual connections he was able to come and visit people here who basically no longer belong to main stream religion and find themselves holding small house churches, or else they are walking alone.  The book of Revelation may refer to them as the remnant.

I cannot speak personally for him, but I do believe he was very sad to see just how far we have declined in this country, most especially when the UK used to produce some of the best Christian witnesses and inspirational speakers there was, such as C. H. Spurgeon, William Wilberforce, William Tyndale, C.S. Lewis, David Livingstone, and of course the Mayflower Pilgrims.

Today, for the best part, the Christian church has become very weak. Of what is remaining, we have the architecture, the stained glass windows and selective words from the bible, which can sound very beautiful, but they have lost the spirit of truth. Many ministers cannot see the truth, or else they possess no courage to speak the most difficult parts, which spoken without love or understanding sound harsh, and as a consequence have isolated true believers and damaged many lives with its lies.

Consider, since 2001, in the capital alone over 500 London churches of various denominations are now private homes.   In the area where I live myself there are 3 small chapels which have now become recently converted, and some years ago I shopped at a large Sainsbury’s supermarket which was once called St George’s church. (St George was executed for refusing to make a sacrifice in honour of pagan Gods)  There is a loss of respect for the Christian faith as the solid stability it once provided, crumbles.

London however, has over 423 new mosques and many stand on the site of former Christian churches.   In a suburb of Birmingham, which is the second largest city in the UK, it is an Islamic minaret which now dominates the skyline calling people to prayer every day through loudspeakers.

Multiculturism accused of being the actual threat to Islamic terrorists is really a friend to a growing religion in the UK.

But ‘hey’ let’s still blame it all on America!

Saying it like it is will have you criticised for creating division.

“Houston – We have a problem”

A Lot of Hot Air!

British activists who see the America president, Donald Trump, as a threat to all things liberal and multi-cultural in the United Kingdom have decided to make their own personal statement in the skies when he visits this once great country in July this year.

It is reported that already over $14,000 has been raised to inflate a large ‘Trump Baby’ balloon which features an inflated oversized baby Trump wearing a diaper.   They believe that this represents all of Britain looking down on him and laughing at his over-sized ego.

How wrong and how childish can people be? However does this represent a majority of people who are living in denial about the state of our nation?

Of those who know about the stint, over 9,000 people have now signed a petition calling on London mayor, Sadiq Khan to allow the balloon to fly. The plea reads:

Donald Trump is a big, angry baby with a fragile ego.

He’s also a racist demagogue who is a danger to women, immigrants and minorities and a mortal threat to world peace and the very future of life on earth. Moral outrage is water off a duck’s back to Trump, but he really seems to hate it when people make fun of him.

You can see the petition here.

It will be interesting to see the outcome on which way this baby flies!

Travelling home on the train after meeting with Wayne and Linda Edwards and my friends, I reflected on the years since God first spoke to me in his still silent voice when I was all alone in a world of chaos in a small parish church. He has consistently revealed things to me which have gone against all I was ever indoctrinated in to through believing lies and liberal propaganda.

The train journey took twice as long as expected. A person who was having a particular bad time had decided to take his life on the rail track that day. I started a conversation with a young man from the army who carried my case and shook my hand when he left, and I later spoke to an elderly English lady who was returning home to New York on the Queen Mary from Southampton. She jokingly told me she had originally gone to America to learn them to speak English. Yeah.

As the train commenced its journey, I eventually watched the patchwork green fields of England whiz past the train window once more and thought about all the people I’d met and heard about just in one weekend, I wondered how after God had helped me so much I could ever stay silent.

Despite hardship and suffering God gives us peace and a certain quiet joy when we adhere to the truth. You can always respect another’s traditions but you can never let them displace you.  Displacement is the key issue in the battle for our souls.

Wayne Edwards spoke on how the bible relates to the time period and the events taking please, in relation to where we are in history at this current time. I did not understand a lot of the interpretation of this but could see without a doubt just by looking out of the window the truth of all this.

It is now so evident to see just how far the UK has declined you wonder how people can still rejoice over a multi-cultural society.

Despite these days, and the relationship with the timelines of the bible, America and the UK should never stay silent. We should still always have hope and speak about it. Let’s always talk about it.

Lives depend on it.

How sweet it is to learn the Savior’s love when nobody else loves us! When friends flee, what a blessed thing it is to see that the Savior does not forsake us but still keeps us and holds us fast and clings to us and will not let us go! —Charles Spurgeon