They say that pride always comes before a fall, and if the last few weeks are anything to go by, the United Kingdom has well and truly fallen. How can this be?

One minute the British were waving their flags, bending their knee and tipping their hats at the 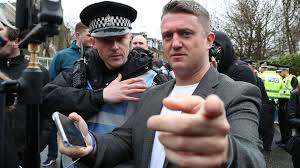 marriage of the year, and the next minute we were facing some disgrace over the seizure of an independent reporter Tommy Robinson, who was swept up, arrested, sentenced and imprisoned within hours on May 25th, 2018.

It certainly messes with your emotions.

His crime; reporting outside Leeds Crown Court where 29 defendants were facing charges of alleged sex abuse and grooming of children and young women.  He was accused of Breach of the Peace

His arrest sent shock waves around the world, whilst many people in the United Kingdom were still totally unaware, because of a complete ban on the reporting of the events.    We were still feeding on the remnants of a royal wedding.

The love affair was fun whilst it lasted, but sadly the reality has now set in and there is a strange and almost threatening atmosphere amongst a certain number of the population as the realization as to exactly what has been physically witnessed in this arrest hits home. Some people are outraged, some are frightened, and many people are just in a state of disbelief because they cannot believe you can be treated in such a way over freedom of speech, most especially when you are reporting on such a hideous crime. They are also ‘tired’.

Not far from where thousands of tourists and well-wishers lined the streets to celebrate a wedding, and where the homeless were also swept up and hid away,  we now see demonstrators, who some like to call thugs or far-right activists expressing their frustration and their disbelief, shouting shame on the establishment. They chant ‘Free Tommy Robinson’.

However, protests had been made earlier in May outside Leeds Crown Court by a number of protestors representing different ethnic groups.

Love him or hate him, Tommy Robinson, whose real name is Stephen Yaxley-Lennon is of course a pretty fearless man, although he does often say he is very fearful for the future of his children. He is down to earth, rough around the edges, street-wise, and has a very chequered past. He has been arrested and cautioned many times, and has also served a jail sentence.  He also knew he was breaking the conditions of his suspended sentence. He primarily reports on the dangers of radical Islam and mass immigration in the UK, and for this reason there is often great offence taken against him for his criticisms. People believe he is promoting ‘Hate Crime’   [Link]

Some of his followers are indeed reminiscent of the type of in your face menacing thugs you would see at a football brawl and avoid, but they are also the type of working class person who say it as it is, and who would equally drop everything they are doing to help an old lady across the road. They can be fiercely patriotic.

Criticizers of Robinson, often bring up the rough element of his demonstrations, distracting from the violent crimes that he is attempting to expose. Often, there is little discussion; he points out his facts, and the accuser, usually the interviewer, using reverse psychology, calls him a racist.   It’s as simple as that.

There are certain things which I would not agree with him about, but in comparison to some of the politicians and media reporters who touch on the subject of mass immigration or radical Islam he is representing more fully what the general population secretly believe. There is a serious problem. Why can’t we talk about it?

What is troubling about this event is that many people are treated in a similar fashion on a daily basis merely for expressing their thoughts on certain subjects which don’t fit the new British values which have been slowly and methodically introduced. People are cautioned within their workplace, they lose their jobs, and they put themselves at risk merely for not going along with a rose coloured consensus view which is being forced upon them. Robinson was prepared to just continue on regardless because he wanted to expose a gang rape culture which is hitting the cities of the UK.  Was he right to do this, or wrong?

In regards to the worst ever child grooming scandal in a town called Telford, I have visited this town.

It is semi-rural and not a typical inner city town. It is surrounded by beautiful countryside and very near to the border of Wales. It is also directly linked by motorway to one of the major cities in the West Midlands, Birmingham. It is difficult to believe that such crime existed in this area but the facts are quite shocking about the number of abused girls, alleged to be about 1000 since the 1980’s.

Therefore, why do people hate Tommy Robinson so much when he is risking his life to expose what is happening?

Here is a talk by him from the Oxford Union, a prestigious and world known debating society from the city of Oxford, England, where he explains how two worlds collide in Luton, Tommy’s home town. It is a respectful setting to listen to his side of a story.  It was filmed in 2015 and it gives the underpinning reasons why he is so outspoken and driven. [YouTube Video]

Whilst people debate whether Tommy was rightfully or wrongfully arrested outside Leeds Crown Court, the subject of silencing people in such extreme ways is really what lies at the heart of the whole matter.

Not being able to speak up, and being labelled hateful for exposing the truth is like slowly suffocating.  You go beyond being merely tactful or respectful in your speech and you go completely quiet and resentful within your spirit. You isolate yourself and you shut the world out, alternatively you compromise and make friends with the enemy of your spirit. You allow it the freedom to say what it wishes. Sometimes you explode aggressively, but eventually you die from lack of oxygen and life as you feed your aggressor. It is a cancer and it’s spreading.

The marriage of England and America as depicted in the most recent royal wedding, held the last tinges of hope, a little light relief and a reminiscence of what love might really be. Sadly, nothing is as it seems; we have become the most silenced of bed partners. Will America take its warnings from what they have witnessed here?