While the Corleone family of Godfather fame was the embodiment of mob life and the acquisition of money, power and prestige through criminal activity, the Trump family––in stark contrast––embodies the nose-to-the-grindstone, upward-mobility glory of the American Dream.

Nevertheless, when I think of the fanatical, maniacal and relentless persecution, accusations, vilification, and sabotage that President Trump has experienced for the past four years at the hands of crazed Democrats––both in and out of office––the infamously stunning Baptism Scene the end of Godfather One comes immediately to mind. Baptism Scene

In that scene, Michael Corleone––who attended Dartmouth College in Hanover, New Hampshire, where he met his future wife Kay, and who then left college to join the U.S. Marines after the attack on Pearl Harbor––is featured in the baptism ceremony where he has been asked to be the godfather of Michael Rizzi, the infant son of his sister Connie and her husband Carlo Rizzi, in 1955.

The solemn ritual takes place in the splendiferous Old St. Patrick’s Cathedral––built in 1809––a Roman Catholic Church on Mulberry Street in New York City. It is held shortly after the funeral of Michael’s father, the powerful Don, Vito Corleone.

Before Don Vito’s death, however, he and Michael––the ordained heir to his father’s mafia fiefdom––concocta complex plan to vanquish all their enemies.

As Michael’s wife Kay holds the infant––who is bedecked in a lace-embroidered baptismal gown handed down through generations––the ceremony begins, with the priest intoning in both Latin and English––Let us pray, mercifully hear our prayers, we beseech Thee, O Lord; Oremus: Precesnostras, quaesumus, Domine, clementerexaudi––and then sprinkling the baby’s head with the Holy Water that symbolizes purification and his admission to the Christian Church.

As the organ music builds, Michael says “I do” to renouncing Satan, to renouncing his sins, and to becoming the infant’s godfather. In each renunciation––there are five of them––he reaffirms his commitment to be worthy of this honor.

And with each surge of music in which the priest sprinkles Holy Water on the infant’s brow and Michael affirms that he has renounced his sins, the audience sees Don Vito’s and Michael’s master plan being executed with balletic precision.

It took years––of intrigue, treachery, heartache––for Michael Corleone to exact revenge on the Corleone family’s enemies, just as it has taken years for the truth of the betrayal of President Trump to be revealed.

But in D.C., the bad guys are usually not shot down in elevators or in a hooker’s bed. Rather, justice is worked through an Attorney General, a special prosecutor, and a handful of honest politicians.

In this case, as it turned out, “the best and the brightest” of the Obama regime and the “best and the brightest” of the leftist media were no match for the singular brilliance of President Trump. His political enemies should have known that for the man who dealt for half a century with the union sharks and cutthroat politicians in New York City, as well as mob bosses on which the fictional Godfather dons were based, the D.C. swamp denizens were small potatoes.

Fuggedabout the fact that these slithery creatures are not honest, moral, ethical, or trustworthy––they are simply not that smart.

It is now clear that President Trump has beaten the Obama regime and the leftist media decisively. Over the next several months, we will see these reptilian putative criminals brought to justice.

And that is not to omit the 35 bottom-dwellers involved in the Russian-collusion hoax, the roles of whom Willis L. Krumholz spells out in sordid detail, including Lisa Page, Peter Strzok, Joseph Pientka, Bruce Ohr, Nellie Ohr, Christopher Steele, Loretta Lynch, Victoria Nuland, Glenn Simpson, on an on––all in obsequious service to the Obama regime. 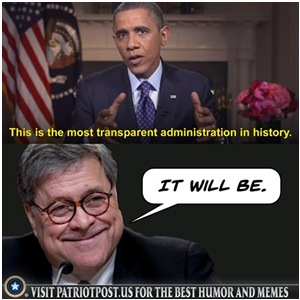 Not to forget Samantha Power, Obama’s Ambassador to the rancid United Nations, who former South Carolina Rep. Trey Gowdy said was “the largest unmasker of U.S. persons in our country’s history”––and her ignominious and possibly criminal role in asking that the identity of Gen. Michael Flynn be revealed in classified intelligence reports seven times between Election Day 2016 and the inauguration of President Trump on Jan. 20, 2017, although she testified later of having “no recollection” of the requests, as reported by Miranda Devine in the NY Post.

Let us remember that the fish always stinks from the head. It now appears that this dishonorable cabal was led by Barack Obama and those who financed his own peculiar––indeed fishy––rise to power. And those who participated in the crashingly failed attempts to destroy the Trump presidency––the Russian-collusion hoax, the Stormy Daniels hoax, the Ukraine hoax, the impeachment hoax, the leaking, the lying, the spying, and the media whores who to this day cover for Obama’s many failures and scandals––including this one, Obamagate––are now on the threshold of paying the piper, so to speak.

It may be true that the wheels of justice move slowly. But right now they are moving in the right direction, in the direction of identifying and hopefully indicting and imprisoning the already-disgraced people who participated for the past four years in undermining and trying to destroy a duly elected President of the United States.