Where Do Students Learn To Hate America?

No baby comes out of the womb a racist or hater.  Hate is an emotion. Emotions must be learned someplace. Either parents teach their children to hate or it is coming from school reinforced by media and Hollywood. How do you get children to hate, just feed them plenty of hate filled adjectives. Children will remember the “Orange Haired” President, the “racist president, dictator president.”  They remember the worst president, who hates minorities and stops them from entering America…illegally.”  Although illegally is never used.  Re-defining words to suit a hate filled agenda is the goal of school.

This week I took a step back and reviewed what the Obama legacy left for President Trump and America.  Obama called for the TRANSFORMATION of AMERICA. What exactly did that mean? To transform something means you must destroy its current status. Obama’s battle cry left me with a question…why are Americans so ready to give up the American way of life which has brought so much greatness to America and humanity?  Why do so many Americans demonize anyone who disagrees?

Would you be surprised to learn that students learn to hate America in school and it is reinforced by the media and Hollywood? Students learn that humans especially Americans are responsible for all of the bad in the world especially the environment. They are taught that the people supporting American values are evil. “The common enemy of humanity is man. In searching for a new enemy to unite us, we came up with the idea that pollution, the threat of global warming, water shortages, famine and the like would fit the bill. All these dangers are caused by human intervention, and it is only through changed attitudes and behavior that they can be overcome. The real enemy then, is humanity itself.” – Club of Rome, premier environmental think-tank, consultants to the United Nations

Are Americans ready to give up their life, liberty and personal property?  70-78% of the population aren’t. So why is this happening? Why are we so divided and full of hate?

School starts the hate train. Hate, the emotion is reinforced by our vocabulary which has been altered.  Words may sound the same but definitions are altered to meet the needs of each specific group. This is identity politics and along with political correctness (censorship), makes communication/conversation almost impossible.  Example: The right loves the Constitution of individual rights and limited governmental powers.  The right teaches the constitution as the bedrock of society one set of rule for ALL. The left teaches the constitution is “living” and can be altered at any time for any group.  Attorney’s no longer learn or read the constitution.  They only case law which is altered to fit a case. How can one document provide opposing viewpoints?  In school, leftist teachers teach only the con side. There is no balance. Opposition will get the teacher fired or the child expelled. 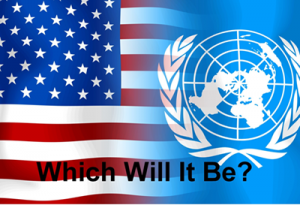 Where is all this hate coming from?  Hate is an emotion which must be learned. No one is born with the desire to hate, yet here we are hating each other and allowing 535 people in Congress, in the CFR, the IMF, the UN, Club of Rome, the media and Hollywood to determine who and what we should hate.  We watch, as they hype words in meaningless comments all designed to boil our blood while creating mobs.  Mobs create fear which gets the New World Order (NWO) Globalists power to control 300 million people.  How? We are now trained to give up more rights to make the pain go away. After Parkland, which was created due to government breakdown, we were told it is the fault of the gun.  Hate the NRA. It is their fault.  When we give up our guns, the government can stop the hate. We must give them the power.  After all, they are richer, smarter and more powerful and must make all of the decisions to control every aspect of our lives.

Would you believe the majority of Americans really want the same things and don’t hate anyone? Hate addresses about 10% the population. However as students learn they are victims, envy, fear, jealousy and hate surfaces. Students have no way to express questions or opposition.  They learn that opposition is evil and should be hated.    Students leave school with reading deficits, and are mediocre, lack innovation, curiosity, common sense logic and the ability to reason. Instant gratification is their demand.  Their thoughts and action must turn to something to keep them occupied, so they learn: hate, envy, destroy.  The media hypes HATE, providing the personal attention students crave. They learn that this attention gets more attention as they watch their numbers grow…. This is the plan:  Create a society of hate. Stimulate hate to create riots and destruction. Call in the government to make hate go away. Start all of this hatred in school. Can this be stopped?

Let’s understand first up that this political game is about POWER, not service to country, environment, children, education, animals, health or humanity etc.  It is all about power. Globalists want it. You are in the way because the only way to get power from you is if you give it to them. So let’s not give it to them, simple.  Wrong, nothing in life is simple. We allow these massive lies and manipulation to focus on hate so much so we stop paying attention to the real threat, the destruction of American values.

In order to stop HATE, we must accept the premise, everything happens for a reason and every action has a consequence.  Why are students taught to hate?  Hate is the chosen emotion eliciting the fastest negative response while promoting divide and conquer. Once the nation is divided, conversation is minimal, trust is gone. If family and church are demonized where do the students go to form relationships?  Why on line with other haters. They feed off each other.  Confused students with broken value systems make them the low hanging fruit easy for another group to come in and feed hate and envy then turn little heads from a loving family, church, country to one of hate and envy.  To be accepted (which is all most people want) you belong to a group. You must pick up the mantra of the group.  Your loving comes from the group who hates all those not following their cause in their group.

When I was a child my parents took me to see the play South Pacific.  This song stuck with me, called: You’ve Got to be Carefully Taught.

Again I ask:  Is America worth saving? If yes what are our doing to help “save” America?  It is up to us. Will you stop the teaching of Hate in school? POTUS gave us the opportunity to control our state curricula but if we leave it to the present crowd, we will get more HATE.  This is our chance to make a difference.

Will you go to floridacitizensalliance.com and sign up to become a textbook reviewer?

Will you go to your school board and expose the texts full of hatred?  Will you correct your children, friends, family and neighbors?

Remember: Either you are a victim or an activist. You can’t be both. Slavery or Freedom?  The choice is yours.