Who Took The Christ Out Of Christmas?

Silent Night, Holy Night
All is Calm, All is Bright.

Last weekend I was snowed in, and it was wonderful.  Everywhere looked clean and pristine outside.   The sky was clear blue, the air was fresh, and there was a silence and warmth that seemed to permeate the whole atmosphere.

As the central heating got notched up a couple more degrees and the fire belted out a warm orange glow, I decided to go all Christmassy and put up a tree, decorate it, and string some lights around it. 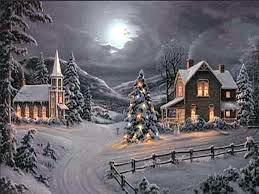 After the finishing touch of a star on top of the tree, I stood back, observing my handiwork, and wondered about the strange tradition we have of putting a tree inside the house and hanging ornaments from it.   I had some pretty bizarre decorations!

Nonetheless, the twinkling lights against the backdrop of snow outside the window created a cosy atmosphere.   All was well.

The epic 1959 version of the movie Ben Hur, would be showing later in the afternoon on TV; there would also be tea and toasted crumpets.   What more could you ask for?

I looked out the window and saw my neighbour pulling his daughter on a sleigh up the hill.   You could hear each one of his steps crunching in the snow, as she sat back and safely relaxed.   They were the only people outside.   No traffic, no pollution; just small figures against a plain white silent canvas.

Very soon, I would probably see them whiz down the hill past my house together.

But my day of bliss was about to be infiltrated.   The world will always find you, even if you don’t go out your own front door.

Sometimes, it will paint up lies and seduce you by using the same twinkling lights and some good old fashioned sentiment of how things should be, to keep you thinking that all is really well in our world despite the obvious slush.   You have to be observant.

In the preceding 5 minutes whilst waiting for my movie to start I was treated to some Christmas adverts of the distorted kind.

A famous frozen food company advertising their oven chips, decided to tell me in a very gentle fashion what family really was.   It could be one mummy and daddy, two daddies, a long distance father, a single mother, or a sister from another mister who comes around for tea.   It then concluded with the statement ‘We are all Family’.   Hmmm, I thought, an oven chip was teaching me something.   That is certainly food for thought.

Next, a very large supermarket chain also decided a politically correct interpretation of Christmas was needed.   With the strap line of ‘Everyone’s Welcome’ the images depicted your typical Christmas gathering.   There was the Sikh family, the introduction of the Muslim family, which has created a certain amount of controversy here, and then the white family; who couldn’t quite get their oversized turkey in or out of the oven.

Well at least they hadn’t been too obvious by removing the Christ out of Christmas by calling it Xmas.    Yet, it was evident that the depiction of a Christian family was not welcome in its inclusive advert.

However, next came an in-depth and very scientific advert with diagrams for women’s sanitary protection, and thank goodness I was all alone.   Where do you look, and how quickly can you turn the television off in front of visitors when you are exposed to that which should really remain private.

And finally, came the infamous John Lewis department store advertisement, which we eagerly await each year for its innovative and very creative story lines, which have included ‘Man on the Moon’, Buster the Boxer, and this year, ‘Moz the Monster’, which features an oversized endearing monster that sleeps under the bed in a young boys room and comes out at night to play and care for the child.

Ironically, it had pretty much summed up the elephant in the room idiom, which no-one wanted to address in its adverts.   The commercialism of Christmas was being used to entice everyone into thinking we are one big happy family, without the need of a holy family.    Women can bleed, but never the Christ.

Moz the Monster had also reminded me of the very popular children’s film, Monsters Inc; in which monsters steal energy from children.   The portal is the bedroom door where the monster enters the child’s room and takes energy from the child’s screams of terror.   The monsters of course are very loveable, and you grow to like them.   One of the most popular characters is called Mike Wazowski, and is a green, one eyed monster!   If the devil is in the details, you really have to watch this film.

Suddenly, the fictional story of Judah Beh-Hur, who fights to restore honour to the family name, after being wrongly accused of treason by his adopted brother, appeared to be arriving at a very good time of the day.   Some restoration to principles that were truly noble was definitely needed.

As the evening came, and it grew dark outside, I switched off the fairly lights and looked out again.  The stars were shining.  A few cars had managed to make it out and were moving very slowly outside.   The day had made me be still and slightly reflective in a positive way.

I thought of the scenes in Ben Hur, in which he searches for his mother and his sister, who he once thought were dead, and finds them in a leper colony; the scene where he is betrayed and finds himself being very cruelly treated, and the scene where he is given water by a stranger.   There is a moment where Christ is on a hillside surrounded by those who wish to listen, and you see Ben-Hur on the peripheral of the crowds walking past them in the distance, going in a different direction.   But the best part of the film in my mind is not the infamous chariot race of the movie, but the scene when the blood of the crucified Jesus runs into the rainwater and heals the relatives of Judah Ben Hur from their leprosy, after they had gone to hear his message.   You know those things can and do happen.

The reality of Christmas is it can be an extremely reflective and emotional time for many people, because so many families are really very broken.  They are trying to pretend everything is alright, just for one day.   Many people who sit down to eat together are really ready to kill each other.  When the day is over many children will wonder about the emptiness they still have inside, despite the numerous presents they have received.   They will wonder where their sense of wonderment has gone, now that the expectation of the day has passed.   It is the most honest observation they will make. The expectation of something that was not delivered

Yet, hope is not lost for those who focus on the real meaning of why Jesus came to earth, how he was born, how he lived, and why he was killed, and more importantly how you can be changed if you search for him.  You can find your real father and brother, and realize what family really is.   You can keep that warm glow, and a sense of peace, all year round.   Christmas is a good time to reflect on that.

Christianity is of course being pushed underground on purpose.   It seems to have been going on a very long time.  The advertisers are focused on making money and also creating division when people point out the obvious about their adverts.   Like champions for humanity they then come to the rescue accusing people of racism.  People need to be aware of this.

They will not win.  No contest.   On a silent holy night, calm and bright, Jesus Christ was born, the Saviour.   We remember his birth.

♥Why do we have Christmas trees