Why Is The Deep State Intent On Killing Roger Stone?

There can be no faith in government if our highest offices are excused from scrutiny — they should be setting the example of transparency. —Edward Snowden

In a society of criminals, the innocent man goes to jail. —Philip K. Dick

Circumstances may accumulate so strongly even against an innocent man, that directed, sharpened, and pointed, they may slay him. —Charles Dickens

It is better to let 100 criminals go free than to imprison one innocent man. —Benjamin Franklin

Innocent men have gone to prison before, and innocent men have been put through the crucible, especially those men who have backed and supported President Donald J. Trump.  It is our responsibility as free Americans to support these men who have been maligned and destroyed all because they supported our president.  Please give generously to Roger’s legal defense fund. 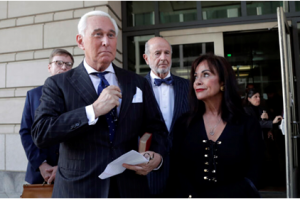 Last February I wrote an article that covered the entire rotten scenario of what has happened to my friend Roger Stone via Robert Mueller and his henchmen.

On June 24th, we received the news that the appeals court for Lt. General Michael T. Flynn had ordered District Judge Emmet Sullivan to dismiss the case against the General, a case we have always known was a set-up and most likely originated in the Oval Office, but we’re still not sure it is over.  This is how evil operates.

One has to wonder just what kind of set-up was decided for Roger Stone.  Mr. Stone was indicted for lying to Congress despite the failure of Mueller to find any underlying crime for Stone to lie about. At trial, prosecutors provided evidence that Stone tried (unsuccessfully) to learn the content of the announced Wikileaks disclosures (which is not a crime). Mueller criminalized perfectly legal political activities in the indictment and conviction of Stone.

Stone was the last victim of Mueller’s witch hunt, after several others including Stone’s friend, Paul Manafort, was tried and convicted.  Proof has now come out that Manafort did not do everything he was charged with doing.  In fact, a New York judge cited double jeopardy and dismissed state fraud charges against him. There was zero evidence that Paul Manafort was involved in Trump/Russia collusion.  John and Tony Podesta, along with Hillary Clinton, were very involved in the Uranium One sellout to Russia and were focused on facilitators of Russian influence in this country,but were never charged.

Stone was railroaded in a vindictive, politically motivated prosecution by a biased Judge and a stacked jury. He now faces years in prison. He and his family have been bankrupted, they’ve lost their home, their savings, their insurance and Stone’s ability to make a living. Roger’s wife, Nydia Stone, is deaf and has no means to support herself if Roger is incarcerated for what amounts to a life sentence. 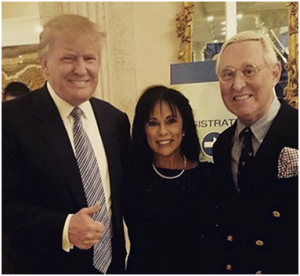 Roger has openly stated, “I was essentially prosecuted because I refused under enormous legal and financial pressure to lie and become a witness against the President who I have known for 40 years and who I spoke to on the phone throughout his historic 2016 Campaign. Mueller’s Dirty Cops had the records of all those phone calls and wanted me to lie about what was discussed in order to impeach the President. I refused.”

Roger was convicted in this political lynching and sentenced to three years and four months in prison plus two years of supervised probation. He immediately filed a notice of appeal based on the blatant misconduct of the jury forewoman, former democratic congressional candidate Tomeka Hart.  Hart’s anti-Trump tweets were uncovered, including a March post about the Mueller investigation, which led to the charges against Stone and the horrid gestapo like pre-dawn raid on Roger’s home.

Judge Jackson faced calls from Stone’s legal team to recuse herself because she praised the jurors before deciding on Stone’s request for a new trial, which rested on the issue of whether the jurors were impartial.

It emerged that U.S. District Judge Jackson had denied a defense request to strike a potential juror who was Obama-era press official with admitted anti-Trump views and whose husband worked at the same Justice Department division that handled the probe leading to Stone’s arrest. And, another Stone juror, Seth Cousins, donated to former Democratic presidential candidate Beto O’Rourke and other progressive causes, federal election records reviewed by Fox News show.

Obama appointee, Judge Jackson, barred every powerful line of defense and carefully stacked an anti-Trump jury comprised totally of liberal Democrats which is about all you’ll find in DC.

After months of fighting the false indictment and trial, Roger was frustrated and angry.  He was worried about his family and his future.  Being sent to a Covid infested prison when you’re 67 years old and have asthma is a death sentence.  Roger stated, “There is no more horrific experience than going to battle with the unlimited resources of the federal government.”  He said his life was in turmoil, he was angry and frustrated and that was when his friend, Pastor Randy Coggins, introduced him to Franklin Graham who counseled Roger to confess his sins and reaffirm his faith in Jesus Christ.

Newsmax’s Spicer and Company recently interviewed Roger and asked him how he is holding up.  He said he is praying fervently for President Trump to commute his sentence or pardon him.

Judge Jackson who sentenced Stone to 40 months in prison said Stone is a criminal and he will be treated like any other felon in the pandemic. Really Judge Jackson?  Many felons were released along with others who were targeted like Stone.

In March, Attorney General Bill Barr instructed the Bureau of Prisons to move nonviolent inmates who were at higher risk of contracting Covid-19 out of prison facilities and allow them to serve out their sentences in home confinement.

During the so-called Coronavirus pandemic, prisons across the nation released large numbers of people with chronic diseases and complex medical needs who allegedly were more vulnerable to COVID-19. Over 16,662 inmates were released from prisons all over the United States due to the novel coronavirus.  At least 50 of the newly released Rikers Island prisoners were rearrested for new crimes in recent weeks and in some cases were cut loose again.

So, these hardened criminals were released to prevent them from contracting Covid in prison, but Roger Stone is to be remanded to prison on July 16th.

Michael Avenatti, who was recently convicted of trying to extort Nike, was released from jail for 90 days to home confinement.

President Trump’s former attorney, Michael Cohen, was released from prison to home confinement.  He once famously claimed he was willing to “take a bullet” for Trump before later turning against his boss, including during nationally televised congressional testimony, pleaded guilty in 2018 to campaign finance violations, tax evasion and lying to Congress about Trump’s past business dealings in Russia.

Lynne Patton, a Trump official who works with Dr. Ben Carson at HUD, claimed he only turned against President Trump when Mueller threatened his wife with 30 years in prison.  He was recently seen dining out with his wife and another couple at a French restaurant around the corner from his Park Avenue apartment.

Paul Manafort was released from prison to home confinement.  His age and his health, including a recent cardiac event were reasons for his attorney to plead for early release.

AG Barr instructed prisons to release those with compromised immune systems, yet he’s willing to send a 67-year-old man with asthma into a Covid laden prison system.

It was Barr’s Justice Department that tried and convicted Stone, and Barr supported it.  President Trump needs to override his Attorney General and pardon his friend of 40 years.

Will President Trump Pardon His Friend?

Obvious to many is the Deep State targeting and prosecution of those who supported Donald J. Trump for U.S. President.  The real criminals still walk free and as Cliff Kincaid stated in a recent article, “There was a “lightning prosecution” for former Trump adviser Lt. Gen. Michael Flynn and former Trump campaign manager Paul Manafort, (and Roger Stone) but “glacial movement” with regard to anti-Trump conspirators Hillary Clinton and FBI officials Lisa Page, Peter Strzok, and James Comey.”  Don’t forget Pientka, Priestap, McCabe, Brennan, Clapper, Sally Yates, Susan Rice, Bruce and Nellie Ohr, and so many others who were involved in this Deep State spying and entrapment of President Trump and his supporters. The Deep State has one justice system for the insiders and another for everyone else.

Earlier in June, Trump took to Twitter to share a post by Charlie Kirk, founder of Turning Point USA. In the post, Kirk argued for a “full pardon” for Stone after making an earlier tweet with claims of “a stacked, partisan jury” and “a rigged, unfair sentencing process.”

The president retweeted the post, writing, “Roger was a victim of a corrupt and illegal Witch Hunt, one which will go down as the greatest political crime in history. He can sleep well at night!” Link

Devvy Kidd’s recent article asks, “Will President Trump Pardon Roger Stone Now?”  We don’t know the answer to that question, but the president has retweeted Stone’s petition to pardon.  Those tweets have given Roger hope.

Mr. Stone needs our prayers, he needs more signatures on the pardon petition, and he needs our help with his legal defense fund.