Home/Opinions, September 2020/Will America Survive Another 100 Million Immigrants: Running America Out of Water?

Will America Survive Another 100 Million Immigrants: Running America Out of Water?

Part 7: We’re on the edge of water scarcity in seven states today, much worse tomorrow with another 100 million immigrants

As we dive deeper into this series, do you feel a sense of alarm?  How scared out of your wits are you?  What about your children who will be caught in the middle of this human tidal wave or better yet, a “Human Katrina?”  And like Katrina, meteorologists warned everyone to get out of New Orleans.  They talked about 150 mile per hour winds that would rip everything to shreds.  It did!

Yet, too many people stayed in their homes, couldn’t get out and/or simply resigned their lives to Mother Nature.  They died.  They had to be saved by brave people.  The carnage?  Unbelievable! 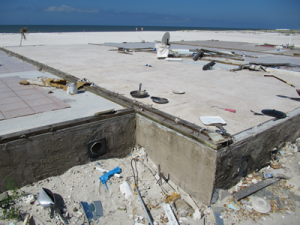 Last year, I traveled to Mexico Beach where a Hurricane Michael barreled through the area and tore buildings off their foundations.  At one resort hotel, the only thing left—a toilet sticking out of the floor tiling while the hotel landed somewhere inland.

(We witnessed a 40 mile swath of destruction along Mexico Beach, Florida from Hurricane Michael. As noted, the only thing left of that hotel was the toilet. If we keep adding immigrants to America, we won’t have enough water to fill a toilet.) Photography by Frosty Wooldridge

Yes, most of us weren’t affected by Hurricane Katrina or Hurricane Michael that hit Mexico Beach.

(We witnessed this kind of destruction from Hurricane Michael in 2019 for 40 miles.  Again, every American faces this kind of a future in shambles if we fail to stop mass immigration of another 100 million people. What are you going to do for your children once you understand the enormity of our predicament?)  Photography by Frosty Wooldridge

But I’m going to guarantee you this fact right now in the middle of this series: if we don’t stop mass immigration into the United States, 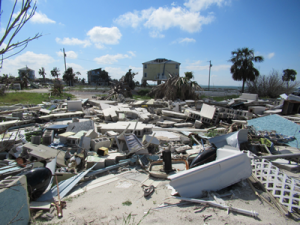 EVERY single American of every race, creed and color WILL be drastically affected when we add another 100 million immigrants to our country to reach 440 million around 2050.  There won’t be any escaping to safety because there won’t be ‘safety’ for anyone.

We’re going to talk about entire systems breaking down.

Over in Africa, India or the Middle East, a person uses less than five gallons per day. When that immigrant sheds his or her misery in his or her overpopulated country, and arrives in America—their water usage explodes to 88 gallons a day at home.

Now let’s add another 100,000,000 immigrants who will follow the same practices and uses of dairy products. As you can see, these numbers climb to insane levels.  They’re not sustainable. There’s only a limited amount of rainwater, ground water and fresh water in lakes.

To grow crops, you see HUGE circular irrigation sprayers all over this country. They suck up the Ogallala Aquifer in Nebraska much faster than it can charge.  That’s happening all over America.  At some point, there will not be enough underground water supplies to irrigate our crops.

We’re not even talking about water usage for pools, products from manufacturing that utilize water by the billions of gallons.

While we’re at it, we’ve got HUGE hog farms, chicken farms and beef farms that dump billions of tons of fecal and urine waste into the ground that ends up in ground water.

Have you notice cities with sprinkler systems? How about the millions of gallons daily for golf courses?

“California’s current water shortage crisis is in the midst of its fourth straight year.  Sever to exceptional drought conditions affected the entire state for two straights months in summer months. More than 38 million Californians live in drought areas. The highest number of people in the United States.”  (Source: USA Today, 9/7/15)

If you think they suffer problems in 2020, I’ll bet they can’t wait to see their state driven up to 58 million by 2050 as projected by the U.S. Census Bureau.  Ironically, 98 percent of their growth stems from legal and illegal immigration.  ( Source: www.CapsWeb.org)

So, are you thoroughly depressed or is that a burr under your saddle?  Be absolutely certain that this report only touches the surface of what WE ALL FACE if this immigration invasion continues.

As Clint Eastwood once said, “Whiskey’s for drinking, but water is for fighting’.”

If we add another 100 million people to our country, we’re all going to be fighting for water, paying horrendous prices for water, and, at some point, we will not be able to solve our water shortages because there will be too many people and too little water.

As an American journalist, and as a father to two boys, and as a rational/common sense individual—I hope you send this series to all your friends. We NEED a national conversation-debate on changing course for our children. Not ten years down the road when there are an added 35 million more of us.  But today!

Again, remember that a Constitutional Republic is not a spectator form of governance.  It’s up to your to take action.  Write to ABC, NBC, CBS, 60 Minutes (60M@cbsnews.com), CNN, NPR, PBS, your local radio and TV stations. Demand they interview top specialists on the many facets of human overpopulation and how it will affect everyone in less than 30 years.  Tell them you want a national discussion-debate on what kind of a civilization you want to bequeath to your children.

If you do take action, here are some points to make with your elected officials:

What can we do to save our civilization?

Finally, we need to move on these points NOW, not later, not in five years, and not sometime in the future.  If you have more solutions, please write me.  Do you see that I am describing a future that allows no escape if we don’t change course?  If you don’t see it, what can I research and write to help every American understand the  dire consequences of endless mass immigration?  In the end, would you like to see yourself living in America in 2050?  So, why would you condemn your kids to that harsh reality?