A Stand in the Park: Resistance in the UK for 2022

“For freedom, Christ has set us free; stand firm therefore, and do not submit again to a yoke of slavery.”

It was a typical icy cold and damp early January morning as I walked through the frozen mud to the band stand at the centre of my local park.

On this occasion I was not going to listen to the usual brass band which would sometimes leisurely play there, but I was there to meet a group of complete strangers who have been meeting each Sunday morning in parks across the UK and around the world, to stand up peaceably for freedom, jobs, small businesses, against lockdowns, harmful laws and against people behind ‘The Great Reset’. 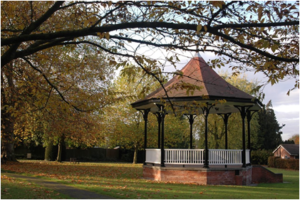 Home – A Stand in The Park

As I secretly prayed, I would not slip over as I observed them all watching me make my way over to them in extremely unsuitable footwear, my nerves slowly subsided as I walked up the steps and was met with a friendly and mask less welcome and even a hug from a group of men and women who were all extremely different in terms of their age and profession yet united in their concerns at the tyranny which is currently taking place in our world.

As we huddled under the canopy exchanging thoughts and ideas, I spoke to a beautiful young woman who was about to lose her job in the NHS (National Health Service) because she did not want to take a vaccination.

Like me she did not work in a patient facing environment, but her mere presence on the hospital grounds where she worked rendered her a danger to others.  She had been notified that she had to have the first injection by the beginning of February and then the second injection by April if she wanted to keep her job.

At the hospital where I work,which is a mental health site, health care workers, have been notified of the same.  However, they have been told other non- patient facing roles would be sought for them, and if not suitable, dismissal is their option.  I cannot imagine how they must feel after having studied and committed themselves to a profession which is often a ‘calling’ for them to help and heal others.

Over the last two years I have observed some of those staff leave their families and turn up each day to care for the sick.  There are obviously good and bad staff; but it is certain, it is not an easy job.  Our government who originally promoted the celebration of their dedication and loyalty, by encouraging its citizens to stand on the streets and applaud them have now betrayed and rejected them.

Instead of ‘saving the NHS’, the organization as reported by the Department of Health and Social Care, is set to lose around 126,000 medical staff in April this year.  This, together with the absences which are recorded due to isolating as an outcome of a positive test or a family member having a positive result, means that the service is collapsing.  This will affect all citizens who access the health service for other minor and very serious issues. They will be at risk.

Covid: Unvaccinated doctor says she is set to lose her job if she does not get jabbed – YouTube

NHS100k is an initiative set up in November 2021 by a group of frontline ambulance staff who respect freedom of choice and wish to connect 100,000 health and social care staff who will lose their jobs by April 2022.

Reference from NHS100k is also made to Dr Sam White who was a GP suspended by the NHS for speaking out about informed consent, the safety of the vaccine and other safe and effective treatments.  Dr White has recently succeeded in winning a high court battle for freedom of speech after he was ordered not to make comments about anything to do with Covid!

Dr White is finally free to share the peer reviewed literature he has been saving since his social media ban and his focus will be on protecting children from the experimental mRNA vaccines made by Pfizer and Moderna, as they can cause myocarditis.

As we made our way from the band stand to a local coffee shop I listened to the many divisions and arguments which had been created and experienced within the workplace and the home.   The group were extremely aware and well informed of the not-so-subtle brain-washing and relentless propaganda which had taken place in order to create such division.  We spoke about The Nuremberg Code, and the cruelty towards patients who had died without their families last Christmas whilst politicians at No 10 Downing Street had reportedly held celebrations.

No 10 partying in lockdown: who enjoyed what and when | Conservatives | The Guardian

As we entered the lovely warm coffee shop away from the icy cold band stand, I then found myself sitting with the young NHS worker who was about to lose her job.  We were joined by her husband and two young children.  I asked them if they had a Plan B.  Her husband said they would take one day at a time.  He was re-assuring.  Despite the dilemma I did think how fortunate they were as a family to be on the same page in relation to their views on the situation.

Their little boy who was about five years old started studying my face and asking me questions and telling me all about himself.  He compared our hair colour, his being natural and mine not.  He compared the colour of our eyes, staring deeply into mine, informed me of the number of freckles he had, told me about a scar he possessed and various other statements in a wonderfully free manner.  Their family dog sat under the table looking from one to the other, possibly wondering when the food would be arriving.

Sitting within the warmth of that family I remembered how life should always be for us all.  They made me welcome and it was wonderful to be with them.  A mixture of generations with a deep desire and a love for freedom, free to speak, to look at each other and make factual observations without any fear.

For the sake of the next generation, I believe that whatever our differences we must make a stand in our own way and draw a line in the sand against the impossible restrictions and the mandates which are being forced upon us.

A Stand in the Park which was founded in Sydney Australia by Brady Gunn, who invited people to stand for truth with him, stood alone at first but after three months people joined him.