… And Guess What, They’re More Than Halfway There

Some enemies can be ignored, others must be destroyed.  —Anonymous

Every communist must grasp the truth; “Political power grows out of the barrel of a gun. —Mao Zedong,
Problems of War and Strategy (November 6, 1938), Selected Works, Vol. II, p. 224.

Comrade Mao, whether he was crossing “a sea of surging waves” or scaling “a mountain pass impregnable as iron” always held unwaveringly to his course, setting a shining example for the Chinese Communist Party.  —PRC President Xi Jinping

America has some serious enemies.  One is China, the other is Islam, and Americans need to know more about both.  China has a secret strategy to replace the United States as the world’s global superpower and will fully accomplish this by 2049 when it celebrates its 100th founding anniversary.

This article is part of a series on educating people about the menace China has become over the last 70 years.  The very survival of our Republic is at risk with the influence of communism inside our country.

In a recent opinion piece from Fox News entitled, Everyone Finally Agrees China Can’t be Allowed to Take Over the World, I thought, “Well duh, what finally gave Fox their first clue?”  The article stated that two years ago when President Xi Jinping laid out his expansive vision for China’s role in the global economy, the “Belt and Road Initiative” which is destined to encircle the world with Beijing’s golden tentacles; together with his expansive territorial claims, he caused the hearts of the party faithful to quicken.

Xi got the rest of the world rethinking the wisdom of handing China the keys to the global car.  The billions of dollars they’ve garnered from American trade has enabled them to buy and bribe their way into owning the world, and the Dragon has expanded their military strength.  They now have the second largest defense budget in the world. 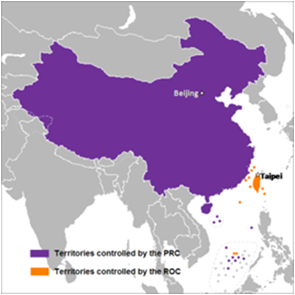 The ideological difference is that today one is staunchly capitalist, and the other is communist. Taiwan wishes to remain independent, but Chinese President Xi Jinping has upped the pressure on Taiwan. Beijing, the capitol of mainland China, has sought to diplomatically isolate Taipei, the capitol of Taiwan.

Following is a thumbnail sketch of China’s history from old dynasties to Communism and mainland China’s efforts to modernize and become the global superpower by 2049.

When the last Chinese dynasty—the Qing dynasty —fell in 1911–1912, it marked the end of the nation’s incredibly long imperial history.  The Qing dynasty collapsed during the second half of the 19th century and the early years of the 20th, due to a complicated interplay between internal and external factors. 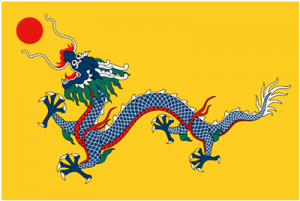 The official beginning of the Communist Party of China began with the 1st Congress held in Shanghai and Jiaxing in July 1921.  Communist Mao Zedong was present at the first congress as one of two delegates from a Hunan communist group.

The Kuomintang (KMT) was the Chinese political party that ruled mainland China from 1927–48 and then moved to Taiwan after the civil war. The name translates as “China’s National People’s Party” and was historically referred to as the Chinese Nationalists. The Party was initially founded on 25 August 1912, by Sun Yat-sen.  It reformed on October 10th 1919, again led by Sun Yat-sen, and became the ruling party in China.

After Sun’s death, the party was dominated from 1927 to 1975 by Chiang Kai-shek who served as the leader of the Republic of China between 1928 and 1975, first in mainland China until 1949 and then in Taiwan until his death.

On October 1, 1949, Chinese Communist leader Mao Zedong declared the creation of the People’s Republic of China (PRC). The announcement ended the costly full-scale civil war between the Chinese Communist Party (CCP) and the Nationalist Party, KMT, which broke out immediately following World War II and had been preceded by “on and off conflict” between the two sides since the 1920’s. The creation of the PRC also completed the long process of governmental upheaval in China begun by the Chinese Revolution of 1911.  The “fall” of mainland China to communism in 1949 led the United States to suspend diplomatic ties with the PRC for decades.

Chiang was recognized by much of the world as the head of the legitimate government of China until 1971, during which the United Nations passed Resolution 2758 which recognized only Communist mainland China as the legitimate Chinese representation to the UN. Though the KMT (Chiang’s political party) lost the civil war with the Communist Party of China in 1949, the KMT took control of Taiwan and remains a major political party of the Republic of China (ROC).

In Taiwan, Chiang’s party slowly renounced its collectivist character although some state planning and control remains.  Fortunately for Taiwan the government allowed the relatively free operation of small-scale enterprises that brought about their economic success.

After years of diplomatic isolation, President Nixon’s 1972 visit to China was a strategic and diplomatic overture that marked the culmination of the Nixon administration’s resumption of harmonious relations between the countries.  When the communists took over in mainland China in 1949 and exiled the nationalists to the island of Taiwan, the United States allied with, and recognized, the Republic of China as the sole government of China, not mainland communist China. 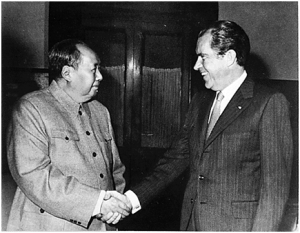 Before his election as president in 1968, former Vice President Richard Nixon hinted at establishing a new relationship with the People’s Republic of China (PRC). Early in his first term, Nixon, through his National Security Adviser Henry Kissinger, sent subtle overtures hinting at warmer relations to the PRC government. After a series of these overtures by both countries, Kissinger flew on secret diplomatic missions to Beijing in 1971, where he met with Premier Zhou Enlai. On July 15, 1971, the President shocked the world by announcing on live television that he would visit the PRC the following year.

In 1972, U.S. President Nixon traveled to the People’s Republic of China (PRC) and met with Mao Zedong, the Chairman of the Central Committee of the Chinese Communist Party, and Zhou Enlai, the PRC Premier.  American/Chinese relations were opened.

The United States banned trade with China until the early 1970s. Thereafter trade grew rapidly, and after the full normalization of diplomatic and commercial relations in 1979, the United States became the second largest importer to China and in 1986 was China’s third largest partner in overall trade.  In 2018, our huge trade deficit with China was mainly in tech and manufacturing.

Communist China has no regard for life.  We have communists in our own federal government, and they willingly allow and promote the murder of the unborn, the newly born and the elderly.  Mao Zedong, father of the Communist Chinese Revolution, killed far more than Stalin and Lenin.  Mao’s infamous experiment in social engineering, the Great Leap Forward (to modernization and manufacturing) was the campaign that caused the deaths of millions and catapulted Mao Zedong into the big league of twentieth-century murders.

In an attempt to modernize the country and spur on the land reform that began with the formation of the People’s Republic of China, Chairman Mao initiated the movement leading to the “Great Leap Forward.” More and more people were diverted from the fields to the backyard kilns in order to reach Mao’s dream of being the world’s preeminent steel supplier. It was rapid industrialization and collectivization of land. 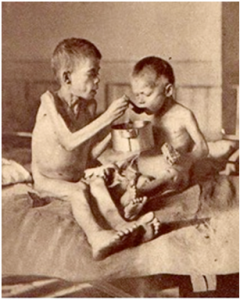 Mao’s program was not only an attempt at increasing China’s presence in manufacturing, but also to reinforce communist ideals.  Farmers had no experience in factory production, and qualities were so poor that they failed.  Crops rotted in the fields, as there was no one left to harvest them. The results were disastrous.

In the end, through a combination of detrimental economic policies and adverse weather conditions, an estimated 20 to 48 million people died of starvation in China.

After Mao’s death, Communist leader Deng Xiaoping ruled mainland China from the late 1970s until 1997, and was the most powerful figure in the People’s Republic of China until his death in 1997.

Deng restored China to domestic stability and economic growth after the disastrous excesses of the Cultural Revolution launched by Mao Zedong.  Its stated goal was to preserve Chinese Communism by purging remnants of capitalist and traditional elements from Chinese society.

Under his leadership, China acquired a rapidly growing economy, rising standards of living, considerably expanded personal and cultural freedoms, and growing ties to the world economy. Deng also left in place a mildly authoritarian government that remained committed to the Chinese Communist Party’s (CCP’s) one-party rule even while it relied on free-market mechanisms to transform China into a developed country.

However, in May 1989, exactly 70 years after the May 4th movement, millions of young Chinese students crowded into Beijing to demand greater democracy and less repression, exactly what Deng Xiaoping had called for. The students had warmed to Deng’s reforms, but the hardliners in Deng’s counsel exaggerated the threat posed by the students.

On June 4, Chinese troops and security police stormed through Tiananmen Square, firing indiscriminately into the crowds of protesters. Thousands of students were killed, and tens of thousands were arrested. Tiananmen Square should never have happened under Deng Xiaoping.  Hardline communism was restored.

In 2012, Xi Jinping became president of China ushering in an era of increased assertiveness and authoritarianism, all the while cementing China’s position as a superpower, one who by 2049 will overtake America as the world’s leader.

Council on Foreign Relation’s member Michael Pillsbury’s, The Hundred Year Marathon, is well worth the read.  You can access it via this website.  Scroll down to the “Warring States” and read the nine principal elements of Chinese strategy which form the basis of China’s Hundred Year Marathon.

General Douglas MacArthur said, “I am concerned for the security of our great Nation; not so much because of any threat from without, but because of the insidious forces working from within.”  He was right…the dangers within our government are real.

Stalin viewed Chairman Mao as a junior partner. He even pressured Mao to help Communist North Korea in the Korean War. The battle of the Chosin Reservoir pitted 15,000 allied ground troops against 120,000 Chinese infantrymen.  American soldiers died by the thousands.

The ten Chinese divisions, along with North Korean forces, were on a mission: wipe out the Marines, the Army, and all of the allies.  MacArthur then asked for permission to bomb Communist China bases north of the Yalu and use Nationalist Chinese forces from Taiwan against the People’s Republic of China. Fearing a widening of the war and possible entry of the Soviet Union, Truman flatly refused these requests.

China is definitely molding the world to exist under the China umbrella, and they will do anything and everything to ensure it occurs. They are seeking world dominance, while many naive U.S. officials and China scholars are blind to China’s “real intentions.”

MacArthur was right, and now the Dragon has become a much more formidable enemy, an enemy that is taking global control and will succeed by 2049 unless Americans become aware of China’s international plans.