A financial panic is a very bad thing, but a government panic can do far greater damage in a far shorter time.  —Tom McClintock

Panic is highly contagious, especially in situations when nothing is known and everything is in flux. —Stephen King

The most brilliant propagandist technique will yield no success unless one fundamental principle is borne in mind constantly – it must confine itself to a few points and repeat them over and over. —Nazi Propaganda Minister, Joseph Goebbels.

No country can survive being ruled by people who hate it.  —Tucker Carlson

Like many Americans, I am sick of hearing about Covid-19.  We want our normal lives back, no “sheltering in place,” no more containment or quarantine, no masks, no travel bans, no closed schools, restaurants,and stores, and an end to the media propaganda and brainwashing.  TheCovid-19 biowarfare virus is dangerous to everyone, but more so to our immune compromised elderly, yet the yearly flu is still far more hazardous to life than this fast spreading and highly contagious Chinese biolab virus.

The evil trait of COVID-19 is its ability to infect others by people who appear healthy. Those infected often manifest no symptoms for up to two weeks, yet can transmit the disease to any person who comes within six feet of them for that entire incubation period, indicating the virus was most likely made in a biolab. Our healthy young people still believe they’re immortal and the virus won’t touch them.  They fail to curb their activities, resulting in countless others being infected.  And driven by a social media craze, teens are purposely coughing on grocery store produce.

What has this viral respiratory illness done?  It has instilled fear in large portions of our population, closed down our country’s entire economy, eliminated normal activities and probably changed our lives forever.  That is the definition of bio-terrorism.

The politicians look blameless and at the same time they’ll increase their power through new laws, just as was done after 9/11.  A long-time friend who has watched the government’s power grow exponentially over the years said, “What is actually happening Kelleigh, is the nationalization of all businesses. It is also happening in Europe. It is a big step toward more socialism. Trump has no choice in the matter.  Keep in mind he has to do what they want or he could end up like Kennedy.”

I’ve watched the look of horror on President Trump’s face as this nightmare unfolded.  He was not a happy camper, but he shouldered the burden and took control as much as he could. And thank God we have Trump, not Hillary and not Biden.

The communists in our government will do anything to sabotage this president, and I have no doubt they have gotten together with their Red Chinese friends to destroy our economy and the stock market and instill fear in Americans.

Chicago’s former mayor, Democrat Rahm Emanuel said, “Never let a good crisis go to waste.” The democrats are using this virus as their last chance to oust President Trump in November.  The soaring economy he created is temporarily in the tank, and 401k’s have lost 25 to 30 percent of their previous gains. Since the Democrats own the banks and the media, they are utilizing everything they can to tear down President Trump’s legacy.  They are absolutely thrilled with the decimation our country is experiencing from Covid-19, and they are blaming our President just like Red China.  And now the increasingly unstable media is demanding blackouts of Trump’s Covid-19 briefings. 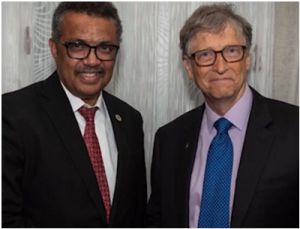 WHO, CDC, NIH and Dr. Fauci

As for the World Health Organization, Director Tedros Adhanom is the first Director without a medical degree. He is also a member of the Marxist-Leninist Tigray People’s Liberation Front which was founded as a communist revolutionary party that came to power in 1991.  It was listed as a terrorist group by America in the 90s.

Tedros was promoted by the Bill and Melinda Gates Foundation who financed many of the phony large-scale health operations in Ethiopia that Tedros had facilitated. The Director and Bill Gates should be tried for crimes against humanity.  Please watch this important 13 minute video expose of Tedros.

Former Deputy Attorney General Rod Rosenstein is married to Lisa Barsoomian. She was exposed in Marilyn Barnewell’s article, Deep State Husbands. Up until 2011, she was the attorney for WHO.  She has represented the Clintons, the FBI and many other corrupt characters.

Nancy Messonnier, MD, is the Director of the Center for the National Center for Immunization and Respiratory Diseases (NCIRD) at the CDC.  She is also Rod Rosenstein’s sister.  Her initial statements about the extreme danger of Covid-19 are what the media is using as ammunition in their propaganda.

Dr. Anthony Fauci is the Director of the National Institute of Allergy and Infectious Diseases (NIAID) at the National Institutes of Health (NIH). He has been called “the nation’s leading expert on infectious diseases.” He has increased Americans Covid-19 fear with his pessimistic statements. He actually contradicted the president on national TV and told him he shouldn’t be so hopeful.  He has stated that “Trump is coming at the virus from a layperson’s standpoint, I’m coming from a scientific standpoint.”

Careful observers have noted that after the almost daily White House news conferences with President Trump and members of the Coronavirus Task Force, Fauci, a regular attendee and the task force’s chief medical spokesman, often runs to Trump-hating media like CNN to contradict — usually with a degree of nuance that gives him plausible deniability — what the president has just said.  The Daily Mail of London noted this behavior in a March 20 article, “Dr Anthony Fauci caught rolling his eyes and smirking as President Trump rants about the ‘deep state’ during coronavirus press conference.”

Within the WikiLeaks Hillary Rodham Clinton email files there’s a letter from Fauci to Hillary Clinton through her aid/lawyer Cheryl Mills, “Please tell her that we all love her and are very proud to know her.” He wrote this to her after her Benghazi testimony. Fauci is just another Deep State Hillary-loving stooge.

Senator Dianne Feinstein of California and several of her Senate colleagues reported selling off stocks worth millions of dollars in the days before the coronavirus outbreak crashed the market, according to reports.Republican senators Richard Burr, Kelly Loeffler, Ron Johnson and Jim Inhofe sold significant stock shares following a January 24th meeting on the coronavirus threat. Loeffler has claimed she is only informed of her stock transactions weeks after they occur.Really? Doesn’t sound like a good stockbroker to me!

Before the stock market tanked, these politicians saved their own bacon because they had market knowledge. Martha Stewart is probably wondering why they have not received the same punishment she received.

Jim Kouri’s latest article at NewsWithViews exposes the massive gun and ammunition sales during this pandemic.  The largest sales are in states where the virus has spread.

Journalist Daniel Greenfield noted in Front Page Magazine that the CDC has focused on liberal causes du jour rather than their mandate of actually keeping Americans safe from legitimate public health crises.

Greenfield noted that one of the “social justice” causes that have been pushed by the CDC are unconstitutional gun control schemes.

Gun permits have been suspended in several states and counties due to the virus panic.

Seattle’s nursing home lost a number of their patients from the virus, but one 90 year old gal survived and is doing well even though she had other health problems.

New York City cases of Covid-19 started multiplying when a 39 year old woman returned from Iran to Manhattan and tested positive for the disease on March 1st.  New York now has at least 5,000 cases.  Daniel Horowitz tweeted, “Nearly the entire outbreak in New York came from a traveler from Iran, a place that was supposed to have a travel ban, but thanks to lower courts continuing to militate against Scotus decision, it was rendered moot.”

A new study whose results were published in the International Journal of Antimicrobial Agents has found early evidence that the combination of hydroxychloroquine, a popular anti-malaria drug known under the trade name Plaqenuil, and antibiotic azithromycin (aka Zithromax or Azithrocin) could be especially effective in treating the COVID-19 coronavirus and reducing the duration of the virus in patients.

Three international studies in China, Australia and France found that Chloroquine with Azithromycin shows a 100% success rate in treating coronavirus in six days! Hydroxychloroquine is an anti-malarial drug while azithromycin is an antibiotic.

President Trump has called for these drugs to be used immediately and has even sent them to New York City where there’s an explosion of the virus.  Dr. Fauci disagrees with him, but then that’s to be expected.  These drugs areproducing strong results in trials involving hospitalized American patients.

President Trump said, “Nothing will stand in our way as we pursue any avenue to find what best works against this horrible virus.”

Managing a pandemic shouldn’t require tanking the economy.  The mainstream media created a worldwide panic and they did it on purpose to see how much power they can wield.  Unfortunately, as comrades of the socialist democrats, it is a huge amount.  Their goal is to damage President Trump beyond repair.

Americans from coast to coast understand this is a different sort of virus, but it hasn’t the numbers that yearly flu’s have shown regarding those who get sick and those who die.  Both federal and state governments have gone berserk destroying our civil rights, and the very rights of American business, whether small or large to keep their doors open during this so-called WHO “pandemic.”

Steve Mnuchin has now moved Tax Day from April 15th to July 15th, which is an anomaly for this country and absolutely unnecessary for the “pandemic” total of Americans affected by Covid-19.  We have entered the twilight zone with how this virus is being treated.

There are 14,371 confirmed cases of coronavirus in the US.

So why the panic?  Why the shutdown of schools, businesses, restaurants, sports, doctor’s offices, etc.? What is the true reality here?  Are American citizens being played?  Why the loss of civil rights?  And why has AG Barr’s DOJ asked Congress to expand legal authorities to circumvent those pesky civil liberties that are already being excessively curbed and destroyed?

We truly are in dangerous waters…stay tuned.

Everyone is suffering because of the Covid-19 outbreak. NewsWithViews needs funds to continue to operate and bring you daily truth about what is happening in America…truth the mainstream media never reports.  We count on donations to survive.  Please help us by donating whatever you can every month.  And ask your friends to sign up to receive the daily reports.  You can donate here.