Skip to content
Home/August 2020, Opinions/Christians Should be Prepared for the Return of the King

Christians Should be Prepared for the Return of the King

You know how we say things like “it’s raining cats and dogs”? We understand that to mean it’s raining really hard. You have to dig back a couple centuries to understand the origin of that phrase was when they had thatch roofs and the animals sometimes nested in them, and when it rained really hard they’d fall through the roof. That’s an idiom.

The Bible is full of them.

When I tell people we can know the season of the Lord’s return, they act like I’m either a raving lunatic or an idiot. [Eh, fine. I’ve never been one to care much what someone else thinks of me. I do, however care about understanding the Word of God.] 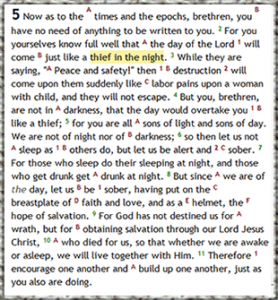 Just the first sentence is a mouthful! Paul said we don’t need anything written to us about the times and epochs (sometimes translated seasons). Why would that be? Why does Paul assume his reader(s) – the early first century Church – know the times and seasons – specifically about the return of Christ?

Interestingly, this passage immediately follows the infamous “rapture” passage of the return of Christ and the apantesis of the believers in escorting Christ from the air to the earth.

Speaking of a rapture….

So let’s debunk the rapture myth. Christians aren’t going to be raptured up and leave the earth while some seven year tribulation is hitting the earth. That’s a lie, and a dangerous one. Someone find me this teaching before 1830 and we can have a meaningful conversation about it.

The “rapture theology” originated when a young Scottish girl named Margaret MacDonald told a “vision” she had. John Darby ran with it, enveloped it in his pre-tribulation theory, and as they say, the rest is history. But it’s not solid Biblical teaching. It’s not Biblical at all, in fact.

[As an aside, I would say most of the serious false teachings on the return of Christ have occurred in the last couple centuries. The early Church did not have the “doctrines” today’s Church promotes. But that’s a whole other story.]

It’s really that simple. I don’t need to go on about a rapture that doesn’t exist in Scripture because it’s a false teaching and no one can prove it by Scripture. So let’s talk about an “apantesis” instead…

Now this word “apantesis” is really important and carries serious implications. The Greek word literally means “to meet one” and is used only three times in the Bible: Matthew 25:6, Acts 28:15 and 1 Thessalonians 4:17.

In each of the three uses of “apantesis” in Scripture, it clearly depicts a scenario of:

If a visiting monarch, president, or head of state was visiting our city, an apantesis would occur. There would be a welcoming group of people go out to the point of entry into our city, perhaps an airport. That group would then escort the visiting dignitary back into the city and the point of destination.

This is the context of Christ’s Second Advent. He will return to earth the same way He left.

Acts 1:9-11 [NASU]: “And after He [Christ] had said these things, He was lifted up while they were looking on, and a cloud received Him out of their sight. And as they were gazing intently into the sky while He was going, behold, two men in white clothing stood beside them. They also said, “Men of Galilee, why do you stand looking into the sky? This Jesus, who has been taken up from you into heaven, will come in just the same way as you have watched Him go into heaven.”

When He returns, the believers still on the earth will actually meet Him in the air and escort Him back to earth.

1 Thess 4:17 [NASU]: “ Then we who are alive and remain will be caught up together with them in the clouds to meet the Lord in the air…”

That word “meet” here in the Scripture they like to quote for their rapture theory is apantesis – used only three times in Scripture — and defined as a welcoming party to accompany or escort a magistrate or dignitary to the point of destination.

Please note one of the other three times apantesis is used is in the parable Jesus gives of the Bridegroom’s return, and it is the instruction given to the virgins for the arrival of the Bridegroom (King): go out and meet Him! Accompany Him to His destination (the wedding feast).

So no, there is no “left behind” scenario of a rapture that whisks believers away. That is a lie. (and that book series has done considerable damage to the Church) There is, however, a far greater scenario: we will meet our Lord in the air and accompany Him back to the earth at his Second Advent.

In verse nine of 1Thess 5, Paul reminds the believers we’re not destined for the wrath of God, which is also why he took pains to explain that upon Christ’s second advent (where He comes to exact judgment on the earth), the believers still alive on the earth are caught up in the 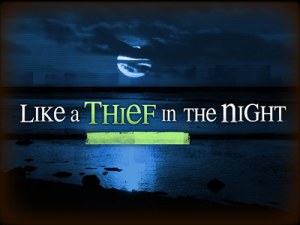 air to Him (as He is descending from Heaven) to accompany Him back to the earth. (theapantesis) The believers accompany Christ on the “day of the Lord”; they are not left on the earth to fend for themselves (as His return is described in Isaiah 63 or Revelation 19:11-16), for they are with Him as Paul described in 1 Thess. 4:15-18.

The Thief in the Night

So what is this thief in the night that Paul, a devout Jew and Pharisee extraordinaire speaks of? And why is this a perfect descriptor for why Christians will not be caught too much by surprise by Christ’s return?

This descriptor is another idiom for something Paul’s audience would have been familiar with, but the western mind would not. In the times of the temple in Jerusalem, part of the priests’ duty was to keep the fire on the altar burning. They had schedules for their duties to keep watch. The night shift was more difficult for obvious reasons. The High Priest would make random visits to the watchman priest of the fire to make sure the fire was still lit. If the watchman priest had fallen asleep, the High Priest would take burning coals and shovel some on the priest’s robes. The priest would awaken in a start as his robes began smoldering and pull off his robes. This was considered an obvious disgrace as he would be exposed naked (or in undergarments) when the next priest came on shift. On the night shift, the High Priest was known by the nickname “thief in the night”.

Paul is telling us the High Priest (who is now only Christ Himself) will come like a thief in the night, and the immediate understanding would be of this scenario. Obviously we are the priests responsible for keeping the fire lit on the altar. (God calls us His priests in Rev. 1:6, 5:10, 20:6.) If we’re doing our job, there’s no way we’ll be overtaken because we will see the High Priest coming! Now does this passage make sense?

(“Behold, I am coming like a thief. Blessed is the one who stays awake and keeps his clothes, so that he will not walk about naked and men will not see his shame.”)

Do you see the reference to keeping our clothes and not walking about naked?? Doesn’t that make more sense now? Can you see how Christ’s disciples should be prepared for the return of the King? If they’re at their tasks with the fire on the altar being kept, they will see as the High Priest is coming. But if they’re asleep, they will be caught off guard, suffer for their slothfulness, and be exposed (naked) for those who were awake and ready.

Christ’s admonition in these passages is to the believers, not the world. The world doesn’t know or care about God and His ways. The world will keep on keeping on like it always has with wars, ethnic wars, droughts, famines and plagues, etc. People will have their agendas of peace or war, of unity or division. As the famous preacher said, “There’s nothing new under the sun.” To these people, the return of Christ will catch them by surprise. They’re the same mockers Peter refers to here:

A Know this first of all, that in the last days mockers will come with their mocking, following after their own lusts, and saying, “Where is the promise of His coming? For ever since the fathers fell asleep, all continues just as it was from the beginning of creation.” For when they maintain this, it escapes their notice that by the word of God the heavens existed long ago and the earth was formed out of water and by water, through which the world at that time was destroyed, being flooded with water. But by His word the present heavens and earth are being reserved for fire, kept for the day of judgment and destruction of ungodly men.

Yet Peter continues and here we have another reference to the thief….

But the day of the Lord will come like a thief, in which the heavens will pass away with a roar and the elements will be destroyed with intense heat, and the earth and its works will be burned up.

Since all these things are to be destroyed in this way, what sort of people ought you to be in holy conduct and godliness, looking for and hastening the coming of the day of God, because of which the heavens will be destroyed by burning, and the elements will melt with intense heat! But according to His promise we are looking for new heavens and a new earth, in which righteousness dwells.

Planet earth is actually wrapping up, if you’ve been paying attention. God’s timeline for humanity has an actual expiration date. God, in His great mercy, has been gracious to let us in on His purposes and plans. We only need to seek Him. Paul said we don’t need the times and epochs written to us, why? Because we already know them. (or we should if we’re disciples of the Son) Our job is to occupy until He comes, clothed and ready, with the fire on the altar burning.