Could You Live Under United Nations Control?

Perhaps you believe you could adjust to whatever controls the United Nations would impose upon people, but have you thought about total control on every aspect of your life?

Let’s take a look at what the United Nations plans to accomplish in the twenty first century through implementation of Sustainable Development, aka UN Agenda 21, now changed to Agenda 2030.

Agenda 21: The Earth Summit Strategy to Save Our Planet (Earth press, 1993), states, “Agenda 21 proposes an array of actions which are intended to be implemented by every person on earth. It calls for specific changes in the activities of all people. Effective execution of Agenda 21 will require a profound reorientation of all humans, unlike anything the world has ever experienced…”

The report from the UN’s Habitat One Conference in 1976, it tells us about owning our own property. “Land cannot be treated as an ordinary asset, controlled by individuals and subject to the pressures and inefficiencies of the market. Private land ownership is also a principle instrument of accumulation and concentration of wealth; therefore,it contributes to social injustice.”

We can see where they’re headed.Their plan requires a complete and “profound reorientation of all humans, unlike anything the world has ever experienced.  And how better to begin the reorientation of all of us than by relieving us of our personal property, and diminishing self-esteem. Just the separation of individuals from the ownership of land they’ve accumulated through their own efforts would be cataclysmic.

Why the attack upon private property? Because the right to property ownership is the key to everything relative to liberty.  The United States Declaration of Independence gives all Americans three unalienable rights, Life, liberty and the pursuit of Happiness (or Property).  Without the ability to personally own property, there is no liberty, only an existence.  Ownership belongs to the state.

John Locke, whose writings and ideas had a major influence on the nation’s founders, believed that “Life and Liberty” are secure only so long as the right of property is secure.

Frederick Bastiat stated in the beginning of his book, “The Law,”

“We hold from God the gift which includes all others. This gift is life—physical, intellectual, and moral life.

But life cannot maintain itself alone. The creator of life has entrusted us with the responsibility of preserving, developing, and perfecting it. In order that we may accomplish this…,” he has provided the resources for us to do so. “By the application of our faculties to these resources we convert them into products and use them. This process is necessary in order that life may run its appointed course.

Life, faculties, production—in other words, individuality, liberty, property—this is man. And in spite of the cunning of artful political leaders, these three gifts from God precede all human legislation, and are superior to it.

What Bastiat stated is both illuminating, inspiring and encouraging. However, we have reached a point where, for all practically purposes, it is of non-effect. Why? In a nutshell, we are in the process of being taken over by world government. They have not yet reached the pinnacle of their globalist plan, but it’s well on the way and there is nothing to prevent its completion unless we see a groundswell of grassroots public resistance.

All of their plans are being accomplished by a combined operation of the U.S. government and the United Nations through their Agenda 2030 and Sustainable Development. (See “Growing Government Tyranny – Democrats Empower it. Republicans are Clueless” and “Green New Deal Reveals the Naked truth Of Agenda 21.”)

Republican congressmen and senators, as well as President Trump are basically “in the dark” concerning this issue as revealed by the USMCA trade deal. The USMCA practically opens all the gates to allow the UN domestic control of everything in our daily lives and our congress critters and president continue to support them. Here is a revealing article which discloses how the UN plans to set aside half of the land area in America to be inhabited by animals only, and humans will be prohibited access to it.  In fact, most of the land they want has already been taken by the federal government. 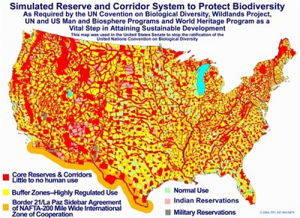 Check out the map by Michael Coffman.

In Tom DeWeese’s latest book, “Sustainable,” he tells us, “The ESA was created as a tool to take and control private land, not recover species. In fact, once a species has been listed no recovery plan is ever required—that’s the end of it. If that seems strange concerning an act that is so highly touted as a major plan to protect wildlife, then one must remember the true purpose of Sustainable Development. Again, it is not an environmental plan, but a diabolical policy to reorganize and control human civilization. (Bold italics mine)

Here’s how the ESA really works. With pressure from Non-Governmental Organizations (NGO) and groups, the federal governmental declares that a certain species is endangered so the species is placed on the ESA list. If that endangered species is discovered on a farm or a ranch – or in the middle of a proposed building project, all human action on the affected property is stopped. No ranching, no farming, no drilling, no timber or mining activity, and no building may take place. Essentially the land is rendered worthless and locked away. Understand that 90% of all species (endangered or otherwise) claim habitation on private land, so the ESA becomes the perfect tool if your goal is to lock away land and stop industry. Not much good, however, for the animals.

Punishment of the landowner is the direct effect of the ESA.  The result is that any landowner who discovers the existence of endangered species on his land quickly understands that to keep the land he worked and paid for, he needs to adopt the “SSS policy” – shoot, shovel, and shut up! Get rid of the foul creature and say nothing of its existence, or lose your land and go to jail. Not a very effective atmosphere for trying to save wildlife, but sometimes the only way to save a person’s property.

For complete information concerning what the UN plans are for how we will have to adjust our lives by 2030, please go to News With views/Tom DeWeese.  He has a multitude of articles on everything concerning UN Agenda 2030 and Sustainable Development.

What Can We Do?

First, learn everything possible about this issue, and the forces behind it. All of it has been on the back-burner for many years.  It came into being soon after the inception of the United Nations which was conceived by the Council on Foreign Relations (CFR) for the purpose of incrementally changing America so that it could be comfortably merged with the Soviet Union. For a primer on the CFR and how it first began taking over the U.S. State Department, then later, more and more of the United States government go to News With Views/ Path to Understanding Part 3.

Please help expose this traitorous evil by passing on this article, as well as whatever you can from Tom DeWeese’s archives concerning UN Agenda 2030.

This information needs to get to the masses.  We desperately need to get out of the United Nations; doing so will help us stop the globalist New World Order plans.