The release on bail of Tommy Robinson, the man who was swiftly arrested, sentenced and jailed for 13 months, for reporting on rape gangs which had been freely operating for many years across the UK, see my article from June, bought a very welcome sigh of relief for the many people who had been supporting his cause against an unfair trial and imprisonment.

However, the exposure of the totalitarian manner in which he was treated, whilst reporting on a case which had already been reported in the public domain, and now the apparent consequences of him being locked in solitary confinement in the second prison to where he was moved, HMP Onley Prison, Rugby, appears to reveal a cruelty which seems to outweigh the consequences of his misdemeanour and his conviction.   What exactly is going on?

In the following days of his arrest; after the deed had been done, and the reporting restrictions lifted; not only the mainstream media, but legal professionals from ever corner of the globe appeared to come out of the woodwork and take great pleasure and a deep sense of superiority in pointing out and justifying the ‘real’ reasons why Robinson had been locked up.

Justice, they believed, was rightly being served up upon a man who they considered a ‘trouble maker’ a ‘bigot’, a ‘thug’ a ‘nazi’ and a whole list of abbreviated adjectives which you would normally attach to a crook who had possibly raped and passed around your daughter. There was indignation towards a man, who albeit slightly irresponsible at times that displayed a hatred which surpassed normal rationality. Why was that? [Tommy Robinson bailed after Court of Appeal win]

If you have been watching the shift from mutually trusting and respecting another’s views to the outright violence and intolerance now being displayed by mainly liberal minded people towards those who see things differently, you will notice that there is very little tolerance being shown towards their fellow human beings, even if that person is presenting some very obvious facts. 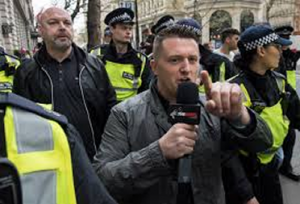 Now they live under the premise that if they are offended by your difference of opinion, you are often sued, arrested and made to suffer unmercifully.

Aside from Tommy Robinson who voluntarily reports primarily on Islam, the UK is awash with ordinary people, who living upon the principles of their own conscience and conviction, and are not physically hurting anyone else, are being dragged often intentionally into law cases because the accuser’s feelings have been offended.

Consider just a few of these cases:

Michael Jones was charged with two counts of religiously aggravated offense for comments he made whilst open-air preaching in Beverley, near Hull. Michael denied both counts. (the offence – comments)

Victoria Wasteney, a senior NHS occupational therapist was suspended for nine months after giving a Christian book to a Muslim colleague. (the offence – passing on a book)

Christian worker, Nohad Halawi, was sacked from her job at London’s Heathrow Airport after false rumors that she was “anti-Islam”. (the offence – not liking another religion)

Gary McFarlane, a relationship counselor from Bristol, was dismissed for gross misconduct by Relate after he refused to confirm that he would provide directive sex therapy to homosexual couples due to his religious beliefs. (the offence – conviction of his own beliefs)

Shirley Chaplin, an NHS nurse, was faced with disciplinary action after being told that she was no longer permitted to wear her cross while at work on health and safety grounds. (the offence – wearing a piece of jewellery – the cross being offensive)

A Christian couple were told they could not adopt their two foster children, because of their “concerning” views that the children needed a mother and father. (the offence – having traditional values)

Vicky Allen is a teaching assistant who was disciplined for answering a student’s question on same-sex relationships. (the offence – honestly answering a question) [Link]

If anyone wants to criticize their religious convictions then they are free to do so; but no one above was inciting violence or causing physical harm.   Imprisoning them and punishing someone based on someone else being ‘offended’ comes from an arrogant spirit which has no tolerance.

As the world slips further into extreme decadence and poverty, both financially and morally, wrong minded people will still demand they are creating some sort of utopia in this world whilst right minded people are thwarting their plans, and must be silenced and stopped at any cost.

The evidence of an out of control section of society which pouts, uses emotion/tears or out-screams another when another’s views are unfashionable or unfavourable to their own is becoming more and more prevalent.      Unfortunately, we are witnessing more and more people in positions of authority who are stepping outside a legal framework and punishing others with their own biased views as well.   This is being witnessed not only in law, but within education and health.   Biased laws which disrespect the rights of a parent and also a patient are now being put in place to silence any opposition.    Does this stem from ‘common purpose’ values which promote leading outside of authority?

People are becoming afraid and do not trust the health system, the law system, or the education system any longer in the UK.

A spiritual battle, which some might say is between the ‘wheat and tares’ or the ‘truth and the lies’ of this world might be at the root cause of this conflict.    The similarities in the silencing of speech, which are occurring across the world, can be of no coincidence.

Certainly, there is now aggressiveness and arrogance in some people which want to see you suffer unmercifully for any slight against them, or their cherished views.

Sometimes, in their presence, you can witness a smile which tries to hide when you relay a tragedy or a mishap which has befallen you.

Some people will silently delight at your mistakes; a past slip of the tongue or a small indiscretion is ammunition to be taken down and used against you as evidence in case you should ever start to shine.    Watch out too for those who use the misdemeanours of your relatives against you.   A wrong minded person will never view you as an individual in your own right in the present day, but they will take every piece of dirt they can find to sling it at you to justify their own sense of rightness, even when they are wrong.

They are also experts at projecting their own flaws against you.

So, who and what is the beast we are dealing with?

The injustice that Tommy Robinson has suffered which you can view in the video from an interview with Tucker Carlson reveals a spirit which is intent on destroying people, and was intent on destroying him.    You will sense and see some stress and confusion in the interview, which is the result of his solitary confinement and the effects that injustice has on people.  It is quite disturbing to watch.

No doubt there will be people who still feel after watching this video he still got what he deserved, and some will say he is an attention seeker.

My own thoughts are that if you want some attention there are plenty of ways to get it other than risking your life to expose this kind of truth in today’s environment.    Tommy Robinson is worn out but he is not down and he is certainly no coward.

Freedom of Speech is worth fighting for.   Regardless if you like or hate the man he didn’t deserve this.

Now we hear the ordeal is not over for Tommy.   There is going to be a re-trial next month and so the possibility of him being locked up again could be a possibility.

What is happening is that a big heavy show of silencing people (in other words this man is also being used as a scapegoat) is happening rather than a show being made of the true offenders of the whole incident, which are the men, accused of gang raping children.   Going after the minor offender and making a show of it is a distraction for showing muscle in the face of your own cowardice.    Human rights for one but never for another.

These actions should seriously concern anyone who loves justice for in reality he should be compensated and not punished further.

It’s a sad day for justice in the UK.