Skip to content
Home/April 2020, Opinions/Maybe the Ships Are For the Children

Maybe the Ships Are For the Children

There’s this crazy conspiracy theory going around about sinister and wicked deeds being done underground. Have you heard it?  Apparently America has a pretty vast underground tunnel system, but not just for some sewer and utility purposes. And not just for DUMBS (Deep Underground Military Bases). The conspiracy is they may have whole cities underground. 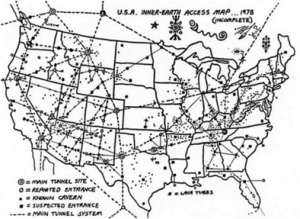 While a more current map of tunnel entry points looks like this:

Where do all those missing people go?  America leads the western world with 800,000 missing a year.

While we’re all in lockdown, maybe we should do a little digging.  I hear Google has been liberated from their censorship tyrants.  Do some basic searches.  Check out these underground bunkers some of our military have recently been moved to, or the half billion dollars spent recently to train our military to fight underground, or even this enormous drug trafficking tunnel that runs along our southern border.

Apparently there are tunnels under the piers in New York City, and piers 92 and 94 stretch out as far as the Clinton Foundation, and these tunnels are rumored to be utilized by human traffickers.  Allegedly there are over thirty miles of tunnels under New York City.  Do you know what sits at the end of the one on Pier 90?  The United States Naval Hospital Ship “Comfort”.  The Comfort is outfitted with beds for a thousand people.  And its sister, “Mercy” is stationed at a port in Los Angeles. 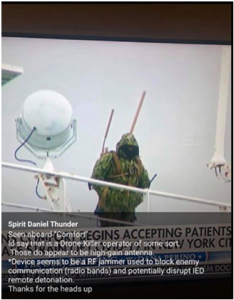 I’d love to disprove this working theory.  I’d love for there not to be children stuck underground in horrific conditions for evil purposes.  But right now the increasing evidence is not conducive for assuaging my fears.  Pictures of troops stationed on a medical ship show battle ready troops.  Look at this one in NYC on the Comfort:

Someone gave their military-experienced opinion of the attire this one had on.  He spotted a high gain antenna with a RF jammer that can block enemy communication and disrupt IED remote detonations.   For a hospital? Here it is without the person:

And wasn’t it just Wednesday that a train engineer deliberately ran his engine at full speed, derailing it and trying to reach the USNS Mercy in Los Angeles?  Yes, here it is.  Why would anyone want to slam a train at high speed into a hospital ship?  Good thing the DOJ was on the job and made their arrest quickly.

No, right now the conspiracy theory that these hospital ships docked on both coasts, and the medical tent army they’ve put up in Central Park, NYC for immediate care for rescued trafficked victims, can’t be erased off the board just yet… 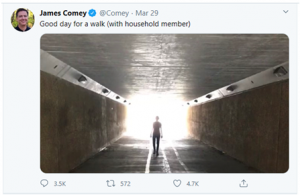 It also seems the treasonous James Comey was sending out more cryptic tweets to his (Deep State) team as well.  March 29 he posted a pic of someone leaving a tunnel, saying it was a good day for a walk.  Underground??  Message they need to get out of the tunnels?

On April 1st, James Woods asked (via Twitter) where all the phone video footage of hospitals overwhelmed with patients was?  We’re getting all kinds of media coverage about the fear of it and the alleged happenings, but as Woods pointed out, usually these types of things get some citizen reports making it through the pipeline.  CBS news even had to fake a picture from an Italian hospital and say it was in NYC because they couldn’t find an American hospital to fit their fear narrative.  In the meantime, concerned Americans have been canvassing their local hospitals to assess just how frightening the scenario really is.  This video of patriotic Americans depicts the huge chasm between American media and American reality.

So if our hospitals are not being overwhelmed and flooded with CoVid19 patients, what may really be going on?  Could there really be a military operation to liberate trapped and trafficked children in underground facilities?

Rumored whispers from family members of the medical community are talking about children being brought onto these ships and into some hospitals.  These rumors are saying it is military bringing them in, and they don’t have a virus.  They are malnourished and with heartbreaking injury and damage. 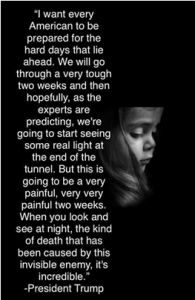 One nurse spoke of the TPN packs (for nutrition and fluids) being brought in and set up.   These second hand reports from nurses in Central Park NY are in a taped interview.  And Thursday, this tweet thread came through about a hospital in Texas that was treating children being brought in by the military.  The children are in distressing shape.

When President Trump spoke at the task force briefing on March 31 and said this:

Did you get the feeling he was talking about a virus?  Odd that he made reference to light at the end of a tunnel…  What did he mean, “When you look and see at night”?  He keeps referencing an invisible enemy.  What are the hard days that lie ahead?  Is this about a virus, or something even worse?

Those who have been researching and digging into the claims of these horrific pedophile rings….those who saw the pictures child handler Rachel Chandler leaked of the underground tunnels and rooms on Epstein Island with naked children in them…those who have ministered to trafficked victims and heard the stories, seen the tattoos and brands put on them as property…those who have mourned with families who have lost their children and loved ones who have gone missing…we… we can’t help but wonder if they’re being rescued?  If there’s finally someone with the power and authority to go into the vilest of hidden places and rescue them? 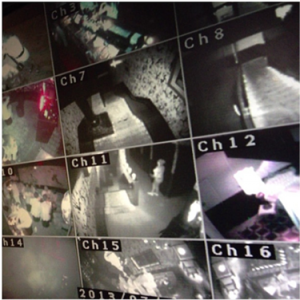 This is an actual picture Rachel Chandler posted on her Instagram from the CCTV at Epstein Island:

Channel 10 shows the naked bodies sitting on upside down buckets.  You get a glimpse of some of the same on Channel 6.  Some of us have spent sleepless nights looking at the pages and screens of children being exploited for sex and worse.  Someone who has the resources to set up underground networks, a buying and selling of people as property, hire thugs to abduct, deceive and otherwise obtain humans for evil and immoral deeds, those are people that would be willing to kill to cover up their deeds.  Human life is expendable to such people.  There is no value in humans to them, except for how it can be exploited.  Something of that vast and expansive of a system would need trained, skilled, military-like resources to come against it.  The average person could never get close.

If the CIA has set up a well-oiled multi-billion dollar drug trafficking outfit, complete with planes, drug runners, cooking labs, government officials bought off, with a trillion dollar black ops budget, running over the course of decades, (and they have), what’s so difficult about believing the same black hearted actors aren’t trafficking people as well?  And if they have the money and the guns and the power and the justice system in their back pocket, what kind of resources would it take to bring them down?

It’s not the kind of resources you and I have.  But our military does.  Our Constitution does.  And how do you get the U.S. military to answer to the President directly?  A national emergency would allow that. 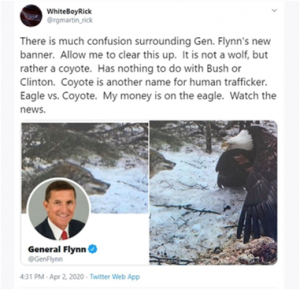 Why do you think General Flynn changed his banner?  Look:

Go back and read President Trump’s Executive Orders, especially this one and this one.  Pay attention to the proclamations he just announced for April:  “Child Abuse Prevention” and “Sexual Assault Awareness and Prevention”.  Look at this compilation of arrests in the last seven days for human and child trafficking charges.

So yeah, it’s speculative.  It’s a “conspiracy theory” based on a lot of background of research into the actors in the pedophile rings around the nation.  It’s piecing together little clues and markers that indicate maybe something else is going on.  And yeah, it’s probably a lot of wishful thinking for rescue and justice.

But as I laid down in bed tonight to get some sleep after reading the report of the nurse in Texas with the children coming in via U.S. military, I couldn’t sleep.  All I could think was what would it be like to be on the other end of the phone, or on the other side of the door, when you got the call that your child that has been missing for weeks, months, or even years, has been rescued and is in a hospital to start their healing?  With having never been in that situation, my heart hurt so badly.  My stomach hurt.  Everything in me wept.

So keep an open eye as the next couple weeks unfold.  Should this be a military rescue operation for the missing children, what would that mean for those families and our nation?  As tin-foiled hat as this sounds, this would actually be a horrible AND a good thing, as our President said, “a painful, very, very painful two weeks.”

What could we be doing?  Praying.Keeping our eyes and ears open.  Seeking how we can bring healing to countless tragedies.  Pray and seek both healing and justice.

*Before you write me to chastise me for what you may deem a fanciful or deluded conspiracy, read:

THIS and THIS and THIS  andTHIS.  And if you still want to chastise me read THIS.  If after that you’re still inclined, research these key words:  Rachel Chandler, Getty tunnels, NXIVM, Jeffrey Epstein victims, Allison Mack, Kenneth Rainere, the Finders Cult, Kathryn Bolkovac, MKUltra victims, Jimmy Saville, Fionna Barnett, “The Silent Children”, visit Operation Underground Railroad’s website, and lay flowers on the graves of Chester Bennington,  Chris Cornell, and Tim Bergling.  We can talk after that.