I’ve gotten a lot of things wrong in my life, and I’d wager I’ve had more wrong than right.  I would have bet a lot of money that Trump was going to be re-elected in 2020.  I held my ground on that long past the election right up to the inauguration.  I gave (and still give) serious merit to the Devolution theory.  I believed Q was a White Hat operation and was for the awakening of the patriots and those seeking good and righteousness.

At different points along the way I would hear bits from God, and other times bear witness to what others shared they had heard from God.  Trying to weave together the different bits and pieces into a whole picture sometimes has proved frustrating and even fruitless.  Other times it has helped bring clarity.  What is it Paul says?  Oh yes, we know in part and prophesy in part, but when the perfect comes, the impartial disappears.

We are still in the imperfect part.  Especially me.  I know I am still learning bit by bit, and a lot of the time I am unlearning more than I am learning.

I settled down to rethink everything, took a step back, went back over my notes trying to figure out what I’ve missed and where.  I got waylaid by some family tragedies, some deaths, some betrayals, a lot of questions….

I’ve rethought and reformed my views on eschatology so much they are almost now a complete reformation.  I am giving serious consideration that our world is post-millennial, which strangely answers more questions than it asks.

Which leads me to present day…

The past several months, I feel like God has led me in a direction to engage in our community in a way that brings restoration to broken lives and revival to community and our local economy.  Whether Trump comes back on the scene or not seems almost irrelevant for what I feel I am to be busy with.  I’m not convinced Trump is what our country needs right now, but I certainly know he would be better than what we have.

There are still many unanswered questions I have about Trump, and I don’t know that they’ll ever be answered.  The point is, our country needs its people not its leaders.  America’s government is wickedly corrupt, and its leaders are incapable and unwilling to lead in righteousness and justice.  It is up to We the People.  If we can bring a course correction without a civil war, we will be fortunate indeed.

I’ve spent some time seeking God, trying to discern His heart, His will, and how to partner with Heaven for my life and my nation.  I don’t know if the things He showed me and I wrote about in January were possibilities or realities.  I thought they were inevitable, but maybe I’m wrong.  Maybe the things I saw can be changed?  And if they can be changed, it won’t be by doing nothing.

There are a lot of “prophetic voices” out there and usually they start to muddy the water for me.  Sometimes it’s a fine line between prophet and profit.  I implore fellow Christians to examine prophetic utterances in this article, and give examples of some current words making the headlines that I have serious questions about.

That said, I’d like to examine a word from Tim Sheets that does bear witness with me.  On June 19, Tim gave a word to his church with the title and/or instruction:  Proceed.  The essence of the word is that we are entering an intense season of warfare in our nation that will remain fierce up through the midterm elections.  We are told to prepare for escalated warfare in the spiritual and natural realms.

Tim relayed this, “An agitated spirit realm will stir violence in the natural realm.”  He said hell will try to vex Christianity, and has declared open season on Christians.  The ekklesia are to engage in the battle, using their authority to wage war on the powers of darkness on our altars of prayer, decrees and worship.

He said that in this war season the functioning ekklesia will rise to operate in higher realms of authority, and its advance will be very rapid.  Rapid strikes will come against hindering spirits, government tyranny, and cultural systemic evils.

He admonishes us to not fear the war season but to anticipate the victories.  This is a season when the ekklesia of God’s kingdom will elevate in greater levels of the dominion mandate, and an increase in bold authority from believers will be manifest.

God’s word to the ekklesia for this season is this:  “Stop looking at your options.  I am your option.  I am your map.  I am your guide.  I have plans you have not seen yet but now will see.”

Tim said God has commissioned Michael to release sufficient warriors from his army to assist God’s ekklesia, and to assist this nation.  We will fuel this angelic warfare which will lead to victories by our decrees of faith.  It’s imperative we understand the Word and will of God, so that we are making righteous, powerful and timely decrees at the right time and place.

We are not to fear the giants in the land, but hunt them.  We have to move into offensive positions against the enemies of God in the spiritual realm (which will often then manifest in the natural realm). 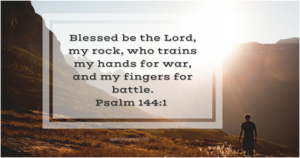 In this season of war, the ekklesia must come into agreement with the plans of God.  How do we come into agreement with the plans of God?  We must position ourselves to see His hand and hear His voice.  Additionally, we must position ourselves firmly in the shelter of the Most High and under the shadow of the Almighty for our protection as hell and its minions declare open season on Christians.  Our obedience to God and our intimacy with Christ are the guarantees of our protection.  If we lose track of that and lose our positions in Him, we are vulnerable to the violence being waged in the spiritual that will indeed manifest in the natural.

A few months ago, the Spirit began moving me into an offensive position in a specific arena, and has been steadily giving me direction for how I am to proceed.  Mine is not a unique position.  God is doing that with His people all over our land.  We are responsible not for “saving our nation”, but for obeying the direction of God for the realm He has given us authority in.  While we hope and pray America can be saved from the destruction of its wicked rulers, we must focus individually on the battle field God has placed us personally in, and is equipping us for.

I’d encourage believers and disciples of Christ to seek Him about this word about a season of warfare before us, and how we’re to engage.  If you missed the link to the word given by Tim Sheets, you can find it here:  https://youtu.be/TZ2LSQ5Yd9k