Home/May 2018, Opinions/The FBI Planted An Informant In The Trump Campaign

The FBI Planted An Informant In The Trump Campaign

I am concerned for the security of our great Nation; not so much because of any threat from without, but because of the insidious forces working from within.  Douglas MacArthur

Furthermore, I am of the opinion that Carthage should be destroyed. Cicero for Cato the Elder

Congress created the Justice Department and Congress can eliminate it.  Chris Farrell of Judicial Watch says the corruption within the DOJ is so widespread that Congress should act.

Some Republicans are considering articles of impeachment against Deputy Attorney General Rod Rosenstein if he doesn’t hand over documents requested by Congress.  Last January, Paul Ryan had to actually threaten the Deputy AG and Director Wray with contempt in order to get them to comply with a House subpoena for documents about the salacious and unverified Steele dossier.

In my two previous articles, here and here, I condensed Rep. Louis Gohmert’s monumental tome, “The Naked Truth About Robert Mueller,” which gave us an overview of how Mueller as FBI Director for 12 years destroyed the bureau’s relationship with Congress.

Thomas J. Baker spent 33 years in the FBI, including several working in the Office of Congressional and Public Affairs.  In his recent WSJ column, he said the deterioration in the bureau’s relationship with Congress is shocking and a total change in the culture.  He said that former Directors William Webster (1978-1987) and Louis Freeh (1993-2001) insisted that the FBI respond promptly to any congressional request, and that back then a congressional committee didn’t need a subpoena to get information from the FBI.  Those appropriate committees are actually key to the bureau’s funding. 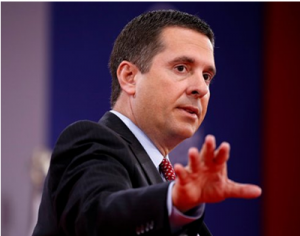 On August 27, 2017, House Intelligence Committee Chairman Devin Nunes asked the FBI to deliver certain documents immediately.  The bulk of the documents weren’t actually delivered until January 11, 2018.  When the FBI did deliver the documents, they were so redacted that the Committee wanted to see more.  One of the documents requested was the electronic communication believed to have initiated the counterintelligence investigation of candidate Trump in July 2016.

What did the bureau do?  On March 23rd, they essentially told the committee it wouldn’t lift the redactions.  When this has happened in the past because of sensitive information, select members of the Congress have been allowed to read them with specific restrictions.  The so-called Gang of Eight was created by statute to ensure the existence of a secure vehicle through which congressional leaders could be briefed on sensitive counterintelligence or terrorism investigations.  But former Director Comey didn’t even inform this group that the bureau had opened a counterintelligence investigation into the campaign of candidate Trump.  He testified that he kept Congress in the dark about the investigation because his assistant director of counterintelligence advised him not to due to the sensitivity of the matter.

The Gang of Eight exists for this very purpose, and not using them was inexplicable according to Thomas Baker. 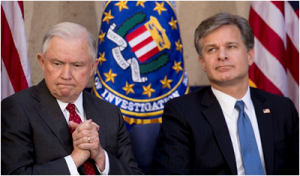 Baker said this isn’t the way a law enforcement agency should behave under our system of separation of powers, something Robert Mueller and James Comey seem to disregard.  The former agent says AG Sessions must push Director Wray to get the FBI’s relationship with Congress back on track, as the American people and our Constitution demand it.

All of this has happened because of the very partisan employees placed in the bureau so as to have every advantage to make sure the Queen of Corruption, Hillary Clinton, won the election and when she didn’t, to destroy the presidency of Donald J. Trump.

Now we find out the FBI had a source inside Donald Trump’s campaign.

The co-founder of Fusion GPS testified that Christopher Steele told him the FBI had a “human source,” a spy, inside the Trump campaign as the 2016 presidential race headed into its stretch run.  And now we’re learning it’s true…Barack Hussein Obama was wiretapping and listening in on all of the Trump campaign and transition team calls, and now we find he actually had a Deep State spy within the campaign.

Kim Strassel at The Wall Street Journal reported on this explosive development on May 10th:

Thanks to the Washington Post’s unnamed law-enforcement leakers, we know Mr. Nunes’s request deals with a “top secret intelligence source” of the FBI and CIA, who is a U.S. citizen and who was involved in the Russia collusion probe. When government agencies refer to sources, they mean people who appear to be average citizens but use their profession or contacts to spy for the agency. Ergo, we might take this to mean that the FBI secretly had a person on the payroll who used his or her non-FBI credentials to interact in some capacity with the Trump campaign.

This would amount to spying, and it is hugely disconcerting. It would also be a major escalation from the electronic surveillance we already knew about, which was bad enough.

Who Was the FBI Spy?

The list of suspects is short, and there are some very suspicious people connected to our intelligence community.  There were any number of people within the campaign, but they were on the payroll, not someone who would just interact with the campaign as stated by Kimberley Strassel.

When this story first hit the airwaves the first person everyone thought of was feckless Attorney General Jeff Sessions. Link The AG has done nothing to indicate any loyalty to our President or the American people.  Sessions recused himself and walked away from this investigation, one which he should have been in charge of, and he has refused to demand the FBI give up the requested documents to Congress.  The AG has also been totally unwilling to take action and fix major systemic issues at the Justice Department. Many have called for his resignation and said he is both worthless and feckless.

Larry Klayman agrees with President Trump on Sessions’ disgraceful behavior.  He says, “Sessions is circling the wagons ‘in house’ to ultimately cover-up or downplay the gross prosecutorial abuse of the agencies he leads as attorney general. This is classic and textbook Washington, D.C., swamp reptilian sleight of hand.”

Sessions is also getting backing from Grassley and Graham, who had earlier resisted the idea of confirmation hearings for a replacement, pretty much guaranteeing that he wouldn’t be fired.  But Trump could fire Sessions and replace him with a temporary AG during Congress’ summer recess, just as George Bush did with Bolton as the United Nations Ambassador.

While Kessler was interviewing Conway at the White House for his forthcoming book, she started “lashing into Reince Priebus,” the former White House chief of staff.

“She said the meanest, cutting and obviously untrue things about Reince and I didn’t include them in the book because they were so unfair,” he said. “She also lit into Jared and Ivanka saying that they leak against Steve Bannon. And I know that White House aides have seen texts that she has sent to other journalists dissing her colleagues, leaking material.”  Kessler’s book is viewed as a strong defense of our President. 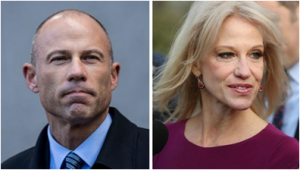 A Washington Post story, “Nunes Sought all Documents on Person Described as Longtime Intelligence Source,” let us know that House Intelligence Committee Chairman Devin Nunes issued a subpoena to the Justice Department last week making a broad request for all documents about an individual who people close to the matter say is a sensitive, longtime intelligence source for the CIA and FBI.

Of course, the DOJ is again refusing Nunes. Intelligence officials say the material could jeopardize the source, a U.S. citizen who has aided the special counsel investigation into Russia’s interference in the 2016 campaign.

The source is a U.S. citizen, has been an informant for both the CIA and FBI, and has provided information that was given to Mueller. A WSJ editorial claims the Post already knows who this source is, so if they do, why can’t Nunes? Apparently Nunes learning who the informant is would somehow violate national security. The DOJ claims outing the source would damage relations with foreign countries, but why would it if the spy is an American citizen?!

Neither Sessions nor Conway are the spies, but the bureau is not forthcoming to Congress.  Kimberley Strassel is right when she says, “We have barely scratched the surface of the FBI’s 2016 behavior, and the country will never get the straight story unless President Trump moves to declassify everything possible.  It’s time to rip off the Band Aid.”

Furthermore, I am of the opinion that Sessions, Rosenstein and Mueller should be fired.