Home/February 2020, Opinions/The Major Takeaway From the State of the Union

The Major Takeaway From the State of the Union

Every morning my awesome wife Mary brings me coffee in bed. While reflecting on President Trump’s amazing State of the Union speech, I received a text from my brother Jerry. He is an extremely outspoken Christian and black conservative Republican. The pastor and congregation at his Baltimore all black church despises Trump. Jerry is a lone voice of truth in a wilderness of Democrat deception and fake news media lies. He feels God has assigned him to stay in his church to be salt. Salt makes a difference.

Jerry’s text succinctly nailed Democrats’ behavior at the State of the Union. “Last night President Trump knocked it out of the park. I give him an A+. Just as I thought it would be, the dems were shameful and embarrassing. They really don’t care about the average American people. To them, we’re just disrespected pawns to be used for their political benefit. Prayer, school choice, black jobs, black colleges, woman job growth, the list goes on and they showed no approval. So shameful.”

Nancy Pelosi leaped to her feet applauding Trump’s initiative to plant more trees and sat stone-faced in response to his initiative to end late term abortions. That moment exposed the perverse priorities and wicked hardheartedness of the Democratic party.

Curious, I used my remote to flip between CNN, MSNBC and other fake news media for their analysis of Trump’s speech. As expected, they said Trump repeatedly lied. They characterized all the emotional moments as nothing more than show business. A CNN black talking head absurdly said Trump does not want black voters. He simply used blacks as props during his speech. The hate oozing out of these progressives is chillingly evil.

Chris Cuomo on CNN is the worse. His eyes were intense, emitting his hatred and barely containable rage against Trump and everyday Americans who love him. 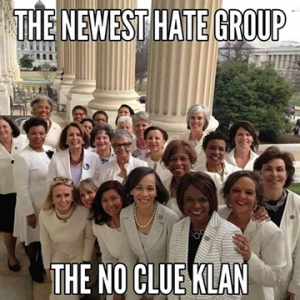 Remarkably, for every achievement Trump announced beneficial to America and Americans, Democrats responded with seething anger. When Pelosi tore up Trump’s speech at the end she expressed the Democratic party’s hatred for Trump, his voters and America as founded.

At the supermarket, I spotted and an elderly gentleman wearing a Marine corp cap and thanked him for his service. He responded, “Thank you sir for acknowledging it.”

I chatted with a senior wearing a “Trump 2020” cap in the checkout line. He thought Democrats behaved disgracefully at the State of the Union. He said he was a lifelong Democrat before voting for Trump and becoming a Republican. I asked what caused him to change party.

He replied, “You’re a black man. I had no problem giving Obama 4 years, but giving him 4 more years was crazy.” I informed the gentleman that I did not vote for Obama. When Obama told Joe-the-Plumber that he intended to “spread the wealth around”, I knew he was a socialist – the wrong man for my country.

The female check-out clerk chimed in, “I’m not suppose to say it, but I’m with you guys.” Referring to Democrats, she added, “If we are not dependent, they can’t pull our strings.”

My major takeaway from the State of the Union is Trump must be reelected. If not, every single one of his unprecedented victories for We the People will be reversed. Clearly, Democrats believe whatever Trump does good for America undermines their mission to control every aspect of our lives and remove America from her rightfully place as leader of the free world.

Brother and sister patriots, please do not assume Trump’s reelection is a done-deal. We must remain diligent and fully engaged. I am informing low-info deceived voters with my new “Trump Train 2020” song. https://www.trumptrainusa2020.com/

Each of us must do our part to keep this man who truly loves America in the White House.