Why Climate Change Is a Fraud

The Science of the people who will not be slaves again!

The journal, Science of Climate Change, published my landmark scientific paper on December 14, 2021.

My paper, and papers by Murry Salby and Hermann Harde, are checkmate proof that natural CO2, not human CO2, causes most of the increase in atmospheric CO2. Physics proves our CO2 does not change our climate.

Natural CO2 remained constant after 1750 and human CO2 causes all the observed increase in atmospheric CO2.

IPCC’s core assumption is the basis of all climate laws, regulations, treaties, taxes, and education. It has cost us dearly in our energy sources, our economy, our national defense, our lives, our minds, and our freedom.

President GHW Bush was the main force in forming and funding the IPCC in 1988. There is nothing in IPCC’s Charter about investigating the cause of climate change. The IPCC merely assumes our CO2 causes climate change.

In June 1992, President G.H.W. Bush and 107 other world leaders attended the U.N. Conference on Environment and Development, or the “Earth Summit” in Rio de Janeiro.

Secretary General Maurice Strong chaired the conference that 20,000 climate activists and green lobby members attended. The UN and the US government paid all attendees’ expenses.

Strong declared in his Summit speech,

“A shift is necessary toward lifestyles less geared to environmentally damaging consumption patterns. We may get to the point where the only way of saving the world will be for industrialized civilization to collapse. Isn’t it our responsibility to bring this about?”

“the real goal of the Earth Charter is that it will in fact become like the Ten Commandments.”

Strong long supported global governance at the expense of national sovereignty. He said environmental mandates require the eventual dismantling of the power of the nation state:

“It is simply not feasible for sovereignty to be exercised unilaterally by individual nation-states, however powerful. It is a principle which will yield only slowly and reluctantly to the imperatives of global environmental cooperation.”

“We need a system of global governance through which nations can cooperate and deal with issues they cannot deal with alone. The ultimate example is climate change.”

“Only an insignificant fraction of scientists deny the global warming crisis. The time for debate is over.The science is settled.”

I attended the meeting in the San Francisco Bay area where Bush’s toady told some 100 climate physicists like me that we were out of a job. They did not want physicists to tell them our CO2 does not cause climate change. They wanted and would fund only ecologists to write reports on the damage we do by burning carbon fuels.

We must stop the climate fraud.

“That means more wildfires in the 6th year of an “exceptional drought” in the West.  That means more extraordinary tornadoes in Kentucky, Tennessee, Oklahoma ad nauseum.

“It means massive hurricanes sweeping up our coasts. It means raising the temperatures at the poles to a point where all glaciers melt into the oceans.

“It means dropping more acidic carbon molecules into our oceans to kill more than 100 species daily across the planet.”

Frosty’s climate claims are not science.

The dark side propagates its climate fraud by trying to scare you with its claimed consequences if you do not do what they tell you to do. Fear causes us to abandon our logic and common sense. Likely, the witch doctors of old used the same techniques.

How to understand the climate fraud.

Every day, the news media tells us about a new “climate catastrophe.”The subliminal message is “because it’s bad, you caused it.”

The climate fraud may be the mother of all frauds. Belief in IPCC’s core assumption dumbs us down and makes us susceptible to other frauds, like gun control and COVID mandates.

They say, “natural CO2 emissions stayed constant and human CO2 caused the problem.” This is the ecological nonsense of “Nature is Good, Human is Bad.”

My book Climate Miracle explains in a short read the logic you need to defend yourself against climate alarmism.

The proof is important.

Now, the only scientific way for them to justify their climate alarmism is to show there is a major error in my paper. Many have tried but no one has succeeded.

Human CO2 does not “accumulate” in the atmosphere.

That illustrates now human and natural CO2 that flow into the atmosphere change the CO2 level in the atmosphere. Nothing accumulates. The level rises only enough to make CO2 outflow equal to the CO2 inflow.

Let’s do a first approximation.

The IPCC says annual human CO2 emissions are about 5% of natural CO2 emissions. This is like a recipe. What you put in is what you get. The only difference here is your recipe is flowing out of a hole in the bottom of your bowl as you pour things in.

Same for CO2 in the atmosphere. This first approximation says human CO2 is only 5%.

But the IPCC theory is that human CO2 is at 30%. This shows IPCC’s core assumption is wrong.

Human and natural CO2 do not react with each other. So, we can calculate their effects independently, which simplifies the calculations.

My calculations include human CO2 that recycles back into the atmosphere and the transfer of human carbon from the slow carbon cycle to the fast carbon cycle. The whole banana.

The IPCC attempts to explain this problem.

The IPCC tries to get around this problem by claiming human CO2, but not natural CO2 stays in the atmosphere for hundreds of years. And by staying around longer, the human CO2 goes up to 30%.

Thus, the IPCC digs its own grave.

This IPCC claim is absurd because human and natural CO2 molecules are identical, so they flow out of the atmosphere at the same rate. 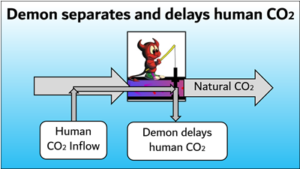 IPCC’s story (and it is a story) would require a magic demon in the atmosphere that can separate human CO2 from natural CO2 molecules, and then detain the human molecules. It can’t happen. No one should fall for this baloney.

IPCC’s climate fiction is so absurd that it proves the IPCC committed a fraud of global proportions.

The COVID shutdown did not reduce the increase in the CO2 level.

The 2021 emissions reduction due to COVID did not stop the inevitable CO2 increase caused by natural CO2. This proves climate treaties and green energy are useless because they ignore that unstoppable nature is the dominant cause of the CO2 increase.

Carbon dating measures the percent of carbon-14 in a quantity of carbon-12. Carbon daters call these measurements δ14C (delta 14C).

We can use δ14C data to prove nature dominates the CO2 increase.

The natural level of δ14C is zero. That does not mean there is no carbon-14. It means the amount of carbon-14 compared to carbon-12 is exactly what nature has produced for millions of years.

Human CO2 from burning carbon fuels has zero carbon-14. Therefore, human δ14C is negative 1000. So, if human CO2 caused the CO2 increase, it would have lowered the δ14C equilibrium level below zero.

Look at it this way. Suppose you have a drink that has 8% alcohol, and you pour in an equal quantity of water. What happens to the 8% alcohol level? It drops to 4%.

The only scientific way for alarmists to argue that human CO2 dominates the increase is to prove there is a major error in my paper. No one has done that.

I will make videos to help you understand my paper.

My paper shows if human CO2 emissions were to stop, the small human-caused CO2 increase would quickly fall, meaning there is no scientific basis to claim there is a climate emergency or worry about our grand kids.

My paper overturns IPCC’s climate fraud with a clarity that can win in a court of law. Good high school students can understand my paper. Now, we need lawyers willing to overturn climate laws, regulations, and taxes.