Women Still Made Dupes By Reds

I continually marvel at how the Lord drops things out of my archives just when I need it. A short time before I started this article, I had filled out a form that required my zip code and I couldn’t remember it. I had to check an incoming envelope from the mail. I have an excellent proof reader of my articles and thousands of 3×4 cross-referenced cards.  My doctor has me on monthly B12 shots for my memory.  I know I’m going to receive response to this article from older women who can claim the same problems with their memories.

Now I rarely share personal things with you but I was born on my parent’s first anniversary which made my father very proud. That was back in 1936 when folks got married first and had babies second. I’ll be 82 on Groundhog’s Day.  If I die first, my husband of 62 years is concerned about all the “junk” I’ve accumulated over the years so I’ve been “downsizing” as much as possible.  I have no idea where it came from but on my desk this morning I found a May 21, 1962 San Francisco Examiner article entitled: Peace Demonstration – Bay Women Made Dupes by Reds. And what is all over the news today? (Jan. 20) Women protesting President Trump and calling for his impeachment.

The 1962 article told of scores of well intentioned dedicated women throughout the Bay area and in major cities elsewhere had been made the dupes of known Communists and left wing sympathizers operating openly and behind the scenes in the much publicized Women for Peace demonstrations. 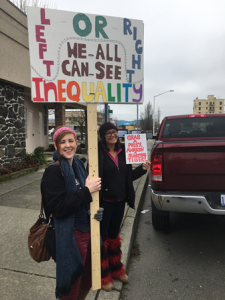 These allegedly “spontaneous” demonstrations with their manufactured signs have for the most part been pre-conceived and organized by Communists and their supporters. Many housewives and mothers, sincere in their contributions of time and money for what they have construed as a worthy cause, are totally unaware of the influence wielded by the commies and their cohorts. It went on to say the record is clear and named all the women who are communists. The role of the active and pro-communists in Women for Peace is more than routine participation. They are calling the shots. (This picture of two young ladies was taken at the Grants Pass, Oregon Women For Peace rally on Saturday Jan. 20, 2018).

At one time we had the House Committee on Un-American Activities and in executive sessions they heard sworn testimony linking at least one of the women to the pro-Communist Women for Peace. Immigration officials charged her with becoming a Communist following her entry into the United States. She lost an appeal and was ordered deported on Nov. 18, 1958 but obviously was still here in 1962.

Martin Dies, as chairman of the House Committee on Un-American activities, fought a desperate battle to expose red subversives and when he made it clear he intended to fully investigate 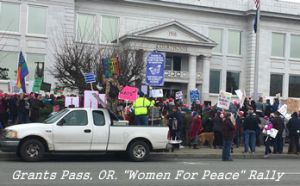 A large group of Republicans held a press conference on Jan. 20th to explain once again it is the Democrat’s fault the government has been shut down and why. The first speaker was a lady, Representative McMorris Rogers from the State of Washington. I checked her constitutional voting record – 52% is Ok but could be better and compared to Washington State’s two female Democrat  Senators Patty Murray and Maria Cantwell with a 13% grade makes Rep. Rogers look like a Constitutional Scholar.  Senator Murray often can be seen sitting behind Senate President Chuck Schumer when he’s on the news and Schumer is responsible for the government shut down.   And low and behold into my hands falls this article by Iserbyt.

Our Oregonian said on 11/26/1993 the freshman Senator from Washington State who campaigned in tennis shoes mounted the first steps to power. She is a forceful advocate for women and families.  Last fall Washington voters rejected a glut of better-known candidates and, for the first time, just like too many uninformed Americans voted not once but twice for the first black president, Washington voters voted to send a woman to the U.S. Senate. Now 43, Murray last January became the youngest woman ever to sit in the Senate and by 1994 the most liberal Democrat earned the only Constitutional score of “zero” in the Senate.  And then some remember Tail Hook. Self-described socialist Bernie Sanders of Vermont received a 16% cumulative constitutional score.

THE REASON SOME PEOPLE ARE LEFTIST THINKERS

In addition, Murray was one of the three sponsors to outlaw “conversion therapy” treatment for the LGBT community and about 70 other members of Congress – all Democrats- have said they support the bill.  Five other states have already taken this step: California, New Jersey, Illinois, Vermont,  and, of course, my socialist state of Oregon where the women are also marching in Portland against Trump and we have the only  transgender governor in the U.S., Governor Kate Brown.

But before I go further, it should be noted that the psychiatry industry years ago designated homosexuals in their diagnosis manuals as having a mental disorder; however the homosexual lobby got that removed so today we could call it a “developmental disorder.”   This will also help you to understand that politics, in general, can become a mental disorder as some politicians strive to normalize homosexuality and why we shake our heads at the decisions some people make that years ago were simply not even discussed. In addition, Goal 26 of the Communist Manifesto is to present homosexuality, degeneracy and promiscuity as normal, natural and healthy. ( Romans 1:26 For this cause God gave them up unto vile affections for even their women did change the natural use into that which is against nature- V. 27 and likewise also the men). [Link] And, while I’m on this subject, beware of OPRAH. She’s a strong advocate of the LGBT community. (Isaiah 3:12)

Our Democratic-controlled Oregon legislature in 2015 banned “conversion therapy” for youth claiming it was causing young folks to commit suicide. Their refusal to acknowledge confusing young people with all this “gender” babble is what is causing the suicides. Hey- in my day we never heard of any young person committing suicide.   Of course, they weren’t being indoctrinated in the public school back then either with all this confusion where they teach children to experiment with sex toys and homosexuality – state sanctioned child abuse and another reason so many parents have chosen to home school and this current story out of California is going to give all home school parents grave concerns because neighbors will be reporting them. Welcome to the Police State.

A 6/19/2017 NEW AMERICAN magazine was entitled: NO PHOBES ALLOWED in Agenda 2030 which does not explicitly mention “sexual Identity,” “sexual orientation,” “gender identification” or LGBT (lesbian, gay, bisexual, and transsexual) rights.”  However, the militant LGBT advocates are lobbying unceasingly to see that those important agenda omissions will be rectified. Let the lobbying begin to virtually make it impossible for those struggling against unwanted same sex to go through “conversion therapy”, according to the LGBT militants, any expression that states or suggests that LGBT sex is wrong, immoral, unnatural, or abnormal is an act of oppression against LGBT individuals and the LGBT community.

EXPLOSIVE INTELLIGENT REPORT TO BE REVEALED

The chairman of the GOP House Intelligence committee on FOX and Judge Jeanine on Saturday indicated within two weeks the 4-page memo, a review of a Classified Document, described as “Extensive Foreign Intelligence Surveillance Act Abuse” has been made available to all House members in a secure room and reveals the removal of Senior officials in the FBI and the Department of Justice and several House members are calling it explosive. You may be asking where are the Democrat leakers now? Well,  this Report does not speak kindly of the Progressive Democrats.

Republican Steve King from Iowa has tweeted the “sickening reality has set in…and it is worse than Watergate. “  Another Republican from New York, Lee Zeldin said the classified report compiled by the House Intelligence is deeply troubling and raises serious questions about the upper echelons of the Obama Department of Justice and Comey’s FBI as it relates to this so-called collusion investigation and he was calling for THE IMMEDIATE RELEASE TO THE PUBLIC. He says the public must have access as soon as possible which reveals the Feds reliance on bad sources and methods.

Rush Limbaugh guessed perhaps it reveals something about Barack Obama so negative that there may be some who believe for the good of the country and the good of our future that it might be better to never release it so the people don’t lose faith in those institutions. Say What? We’ve lost all faith in our institutions decades ago with Wilson and FDR.  It’s time to clean the swamp and get back to our Constitutional Republic and may the chips fall where they may.  This Report may be only the tip of the iceberg and the biggest scandal we’ve ever experienced over shadowing perhaps Julius & Ethel Rosenberg.

In the Bible, Christians and Jews have documentation of myriad conspiracies. In 2 Samuel 15:12, for example, the scriptures record a conspiracy by Absalom to overthrow King David. In Acts 23:12-13, a conspiracy to kill the Apostle Paul is recounted. And in Psalm 2:2, the bible even says that the kings of the Earth are conspiring against the Lord and His anointed (Trump?).  In Ephesians 6:12, Paul’s Epistle warns the faithful of the spiritual struggle “against principalities, against powers, against the rulers of the darkness of this world, against spiritual wickedness in high places.” Clearly, while He urges His people not to fear them, the God of the Bible recognizes that conspiracies can and do exist and there  has been a great deal of evidence suggesting that the 45th president is under attack by the Deep state as well. (1/8/2018 New American)