On August 26, 2021, 13 members of our U.S. military were killed at the airport in Kabul, Afghanistan when two savages detonated explosives at the airport’s main gate and blew themselves right to Hell.  Thousands were trying to get out of that sh*t hole We the People have poured TRILLIONS of borrowed dollars into to keep the poppy fields protected so heroin keeps coming to the U.S.  Spread the toxic disease called democracy and attempt to force a country of Muslims into accepting ‘Western’ values. 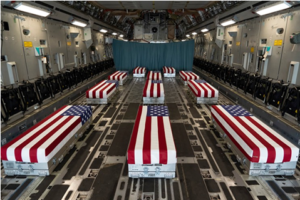 OUR dead flown back to Dover AFB.

Butchers who call themselves the Taliban had begun a massive effort to take back that country after 20 years of U.S. forced occupation.  We should NEVER have gone into that country.  Our military go where they’re told, when they’re told and serve bravely and with honor.  It’s the same incumbents who get reelected every two years who have blood on their hands for what happened over there.

I know from reading stories the past two DECADES, our military, while looking over their shoulder 24/7 for fear of being blown to smithereens, got to know villagers, felt they were doing good.  Women could finally get an education as well as children; they could work, things changed for the better but anyone with knowledge of warfare and the game knew the minute the U.S. left for good, Satan’s soldiers would revert right back to the stone age with their toxic, totalitarian Sharia laws under their phony religion called Islam.  And, they have.

That matters not to the Masters of the Game who run the world.

The Taliban WE funded.  Five months before 9/11, Bush, Jr.,“gifted” the Taliban $43 MILLION borrowed dollars for allegedly joining the ‘War on Drugs’.  Opium, heroin, poppy fields. Go watch this 4:40 video of Geraldo Rivera interviewing the commanding officer in one of the provinces:  Our Marines were guarding the poppy fields.  Rivera tries to spin it with “we tolerate it” BS.

The U.S. was finally getting out.  President-elect Trump had already set May 1, 2021 as starting withdrawal.  Career criminal and impostor president, China’s bitch, Joe Biden, playing Commander-in-Chief in his advanced dementia la-la-land turned a workable, sane withdrawal into a blood bath.  Actually, I should say the other usurper president, Hussein Obama and communist Valerie Jarrett running the show just up the street.

I highly recommend you read this article because Trump’s plan started in 2020:

I ran Team Trump’s Afghan withdrawal — Biden’s attempt to blame us is just sad – “President Joe Biden has sought to place blame for the shocking dénouement in Afghanistan on the situation he “inherited” from the Trump administration. What a sad-sack attempt at blame-shifting. Team Trump’s withdrawal plan was sound. What proved catastrophic were Biden’s changes to that plan.”

The biggest screw-up in the history of this country not only cost the lives of 13 of our military, Joe’s incompetent IDIOTS from a command position and fools in the Pentagon left $84 BILLION dollars-worth of military equipment from planes to bullets, advanced technology hardware, Humvees, you name it, those savages got it all and how the world laughed at US.

What was also left behind were thousands of American citizens.  Military families as well as government contractors and their families.  Trapped in a Hell-hole and still trapped TODAY.  Six days after the disaster at Kabul Airport, Biden managed to read his take on such a shameful and deadly mess:

Biden claims Afghanistan withdrawal ‘extraordinary success’ in address to nation – “In an address to the nation exactly 24 hours after he abruptly ended a chaotic evacuation of US troops from Afghanistan, a defensive and at times surly President Biden insisted the bug-out was an “extraordinary success,” despite the stranding of hundreds of American citizens and thousands of Afghan allies.”

Surly?  Biden is known for being a bully just like that Ho playing VP, Kamala Harris, another monumental, incompetent screw up.

Biden admin admits it left hundreds more US citizens behind in Afghanistan after chaotic withdrawal – “Even before the withdrawal, Biden had pledged to leave no U.S. citizen behind.”

Scum bag rotten liars.  It’s almost beyond words and your labor funds their paychecks:  Biden NatSec Advisor Jake Sullivan: “We Safely and Effectively Drew Down” in Afghanistan (VIDEO), Dec. 17, 2021 – “For the first time in 20 years there are no US troops in harms way in Afghanistan this holiday season,” Sullivan said during remarks before the Council on Foreign Relations (CFR). “We safely and effectively drew down our diplomatic presence. We lifted tens of thousands of vulnerable Afghans to safety in a unique American example of capacity, commitment and sheer logistics.”

Private organizations have managed to get hundreds back home, but the biggest obstacle besides the Taliban has been our State Department.  Another cabinet headed up by a blithering idiot named Tony Blinken.

Private American Citizens Are Risking Their Lives in Afghanistan Doing What our Troops Should Be Doing – “While it is great to see this kind of esprit de corps between former Special Operations Forces operators and between them and their Afghan counterparts, it is a crying shame that these guys had to go on their own dime to Kabul and then operate without any of the even flimsy protections provided by the Law of Land Warfare when you are in contact with the Taliban…arguably, they were operating in violation of the UN Mercenary Convention…because the US Armed Forces at Hamid Karzai International Airport were forbidden to do this kind of operation.”

Volunteer group evacuates 39 Americans and permanent residents from Afghanistan, Dec. 18, 2021 – Very dangerous mission.  “Among the evacuees, more than a dozen children including an 11-month-old American citizen.  “This is the first known major airlift rescue with American boots on the ground since the U.S. government abandoned the country of Afghanistan in August,” James Judge, a spokesman for the organization, said in a statement.”

The Chinese don’t think in terms of months or years, but decades in advance.  The Butchers of Beijing, foot soldiers for Satan, just biding their time and it is paying off:  Why is China so interested in Afghanistan?  “Not content with buying up land and businesses in the United States and Europe, now they’re apparently ready to “help” Afghanistan.

“Beijing stated they would invest $62 billion into Afghanistan to aid the development of China’s $3 trillion Belt and Road initiative. (BRI) This Chinese initiative is a massive project to develop its road and port infrastructure throughout Asia and Europe. However, as multiple European diplomats and the American think tank C4ADS point out, China designed BRI to tip the “balance of power in favor of subsidized Chinese companies.” And it will significantly improve the scope of Chinese power on a global level.”

The dead have names. Most were just kids, really. Christmas is seven days from now.  Like so many millions of military families who lost a loved one in all wars (The last constitutional one was WWII. The Constitution grants ONLY Congress the sole power to declare war.), there will be 13 empty chairs at dinner next week.

13 empty chairs is Biden’s Christmas gift to the families and friends of those killed in Kabul.

And, here we are four MONTHS later, the fake Biden administration’s paid liars claim less than two dozen Americans are still stranded over there.  Team Joe’s never ending lies about how many Americans were left in Afghanistan, Nov. 13, 2021

“Before his utterly botched Aug. 30 withdrawal of American troops from Afghanistan, President Biden made a solemn vow:  “If there are American citizens left, we’re going to stay until we get them all out.”  Not only did he break that promise, we’re still learning just how badly he failed: Thousands upon thousands remain stranded.”

And still, a recent poll showed 37% of Americans support Biden’s decisions on issues like defense and national security.  They aren’t Americans, they’re parasites.  Maggots who feed off the host.  What’s in it for me and tough luck for our fellow Americans left behind and for the grieving families while they all enjoy Christmas presents and turkey.

The same for the families of our military killed on Extortion 17, a Chinook helicopter flying near Kabul, Afghanistan on August 6, 2011.  Extortion 17: The deadliest day in the DEVGRU history:

“The crash is referred to as Extortion 17 by the call sign of the CH-47 Chinook helicopter involved in the crash. The crash killed all 38 people on board — including 25 American special operations personnel, five United States Army National Guard and Army Reserve crewmen, seven Afghan commandos, and one Afghan interpreter — as well as a U.S. military working dog. It is considered the worst loss of American lives in a single incident in the Afghanistan campaign, surpassing Operation Red Wings in 2005.” The dead have names.

I spent a lot of time researching what happened that night.  I firmly believe the Taliban were tipped off and I’m not the only one.  Extortion 17 Is A Bigger Scandal and Betrayal Than Benghazi, Oct. 3, 2014 – “Forget Edward Snowden. Joe Biden made one of the biggest leaks of national security information in recent history!

“Karen Vaughn, joined by her husband Billy, on Fox News said, As soon as Joe Biden announced that it was a SEAL Team who took out Bin Laden, within 24 hours, my son called me and I rarely ever heard him sound afraid in his adult life…. He said, ‘Mom, you need to wipe your social media clean…your life is in danger, our lives are in danger, so clean it up right now’.”

“Mr. Vaughn, showing his anger and disgust with Biden, ripped the media. “The media has let this man get away with saying ‘Uncle Joe’s gaffes, Uncle Joe’s gaffes,” he said. “This is not Uncle Joe and he’s not some senile old grandfather. He is the second in command of the most powerful country in the world and he needs to take responsibility for the comments he makes and quit being given a pass.”

“Additionally, Charles Strange, father of fallen Navy SEAL Michael Strange, has been just as outspoken as the Vaughns against both Barack Obama and Joe Biden. In July, Strange told WND “Obama sent my son to his death.”

Former U.S. House Rep. Trey Gowdy made a big splash with conservatives in his “hunt for the truth” regarding Benghazi.  A complete failure which I covered in this column:  Blood at Benghazi – it drips from Hillary’s hands, January 18, 2016.  13 Hours – The Secret Soldiers of Benghazi  is absolutely worth watching.  Heart breaking.  Amazon Prime is one source; this is another.  It’s also available on Netflix.  As soon as I read about the multi-million dollar deal between Hussein Obama, that thing he’s married to & Netflix, I canceled my subscription.  My money will not go to Hussein Obama.

“In defense of the world Order, U.S. soldiers would have to kill and die. … We are not going to achieve a New World Order without paying for it in blood, as well as in words and money.”— Arthur Schlesinger, Jr., in Back to the Womb, July/August 1993 issue of Foreign Affairs, the flagship magazine for the traitorous Council on Foreign Relations (CFR)

“We are on the cutting edge of the New World Order here in Bosnia”. U.S. Army Major Bushyread, May 8, 1996, CBS Evening News with Dan Rather

The Secret societies that run the world