“Lock Her Up” Wasn’t Just A Campaign Slogan

A nation can survive its fools, even the ambitious.  But it cannot survive treason from within…for the traitor appears not to be a traitor…he rots the soul of a nation…he infects the body politics so that it can longer resist.  —Marcus Tullius Cicero

Rex Tillerson Out, Pompeo In

On the 13th of March, 2018, Steve Goldstein, Under Secretary of State for Public Diplomacy and 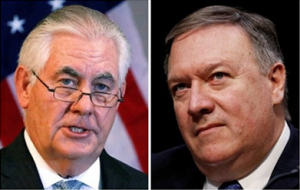 Public Affairs, was fired for contradicting the account of how Rex Tillerson was terminated. You lie to the media about how someone was fired in this administration and you lose your job!  That’s leadership! Chief of Staff, Gen. John Kelly notified Tillerson on Friday, March 9th of his imminent termination.

President Trump announced he was replacing Rex Tillerson with CIA Director Mike Pompeo as Secretary of State. In addition, the President revealed Deputy Secretary of the CIA Gina Haspel has been selected to replace Pompeo as Director.  It is troubling that John Brennan, former CIA Director under Obama, endorsed Haspel.  Brennan has lied, spied on Senate staffers, and has often leaked classified information to suit his own needs, not to mention the strong rumor that he converted to Islam.

Tillerson was initially chosen by those who headed up Trump’s transition team.  The task of selecting cabinet officials and key West Wing posts was in the hands of VP Mike Pence when Chris Christie was pushed aside.  Pence’s deep contacts with Republican establishment on Capitol Hill were seen as critical to navigating the transition, but many of us were not happy with the choices from the swamp.

Tillerson and the Iran Nuclear Deal

Wall Street Journal  “Tillerson Fired Over Rogue Bid to Save Iran Nuke Deal.  Efforts by Tillerson to save the Iran nuclear deal and ignore President Trump’s demands that the agreement be fixed or scrapped were the cause of months of disagreements between the State Department and White House.

The reason Tillerson was fired is that he was discovered to have been operating a rogue operation to save the Iran nuclear deal when Trump wants it either majorly fixed or scuttled. Tillerson was working with our “European allies” to see to it that Trump’s efforts met failure.

The president had a range of fixes that would tighten the deal’s flaws, but apparently Tillerson caved to European pressure to walk back the President’s demands and appease Tehran while preserving the deal.  He was undermining President Trump with European allies, and once Trump knew this, it was over for Tillerson.  With the uproar of the citizens of Iran wanting true freedom, this was absolute anathema to our President.

Tillerson is also a big believer in climate change and Trump is not.  He had signed climate change provisions, including a commitment to the Paris Agreement.  The former secretary was also against the U.S. embassy being moved to Jerusalem.

Worse yet, Tillerson’s State Department confirmed  that it welcomed members of the U.S. Council of Muslim Organizations (USCMO), an umbrella organization that includes organizations like the Muslim Brotherhood-linked Council on American-Islamic Relations (CAIR), to discuss Israel with Trump administration officials.  And there’s more.

Rex Tillerson had a number of significant policy and messaging disputes with the president, and every one of them was followed by a chorus of unnamed administration sources telling reporters that Tillerson’s ouster was imminent.

Secretary of State Tillerson betrayed our president’s trust and was terminated.  So why is Attorney General Jeff Sessions still employed?

Feckless Sessions and the Mueller Witch-hunt

As Roger Stone says, “Is it any wonder that once Jeff Sessions shamelessly recused himself from the Russia Collusion Conspiracy investigation and turned it over to his deputy Rod Rosenstein, that Rosenstein would reach out to his old mentor for help?  Rod worked directly under Mueller at the DOJ as far back as 1990.  When Comey was still working as the Deputy Chief of the Criminal Division for the U.S. Attorney’s office in New York, Mueller and Rosenstein were becoming thick as thieves.  Who is surprised when three of the top lawman fixers for the Clinton/Bush cabal desire the destruction of outsider Donald J. Trump.”

Rosenstein failed to restrict Mueller to the subject of Russian collusion, and Mueller along with his 16 Clinton-loving attorneys has delved into areas far exceeding what he was hired to investigate.  In fact, last year Rosenstein told lawmakers the special counsel handling the Russia investigation has “full independence.”  Really?  Now he’s said, “Bob Mueller is not an unguided missile.”  Like hell he isn’t!  That missile is targeting our President. 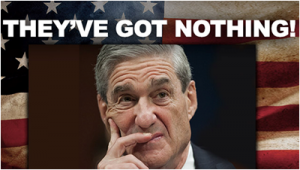 The House Intelligence Committee run by Chairman Devin Nunes and fellow Republicans, announced in a 150-page report that the committee is closing its investigation of the Trump Russia collusion story because after 73 witnesses and 300,000 hours, and pages of documentation, they haven’t a shred of evidence.  The Democrats dissented.  Why is Bob Mueller still functioning as special counsel, and why hasn’t Sessions shut him down?

Sessions’ DOJ has been so weak on real corruption that James Clapper will never be prosecuted for lying to Congress.  It’s been five years since the former spy chief lied to Congress about the NSA’s giant surveillance program, and the five-year statute of limitations for his crime has come to an end, guaranteeing him a peaceful retirement.  Clapper, director of national intelligence from 2010 to 2017, admitted giving “clearly erroneous” testimony about mass surveillance in March 2013, and offered differing explanations for why.

I’m all for Sessions going after sanctuary cities and illegal aliens, but he’s even failed there.  Oakland Mayor Libby Schaff (D) helped illegal immigrants convicted of crimes evade law enforcement, further endangering their communities, and endangering ICE agents.  Why isn’t this obstruction of justice?  And why hasn’t she been charged?  Nothing seems to happen with AG Sessions.  And think about those who have suffered at the hands of Obama’s DOJ and Mueller’s investigation because of Sessions’ spineless recusal, men like General Michael T. Flynn.

Obama, Hillary and Fusion GPS were investigating Romney, and then they created the Michael Steel Trump dossier, and Obama paid a million bucks to Perkins Coie to funnel the payment to Fusion GPS.

The Federalist discovered the Obama payments to Perkins Coie last October when the Washington Post first revealed that Hillary was paying the same law firm, to the tune of $12 million. So how come throughout the 2012 campaign nobody in the media ever thought of investigating whether Obama had used Perkins Coie the intermediary for their payments to Fusion GPS like Hillary did?

Records filed with the Federal Election Commission show that Obama’s “Obama for America,” the offshoot of Organizing for America PAC had paid nearly a million to Perkins Coie, same they paid in 2012 to destroy Romney.  [Link]

Why are there no charges against Comey’s dereliction and leaks, Loretta Lynch, Hillary’s email scandal, Uranium One, pay to play, the Steele Dossier paid for by Clinton and the DNC via Glenn Simpson’s Fusion GPS, Andrew McCabe and Peter Strzok’s plots against Trump and General Flynn, James Baker’s leaks, Strzok’s paramour Lisa Page, Bruce Ohr, Nellie Ohr who worked for Fusion, Christopher Steele and the rest of the Obama Deep State traitors?  Why are there no indictments and prosecutions?

“Lock her up” wasn’t just a campaign slogan.  We meant it!

The Obama administration is responsible for all the spying and opposition research with Fusion GPS, and Hillary knew all about it.  And the funds all went through the Perkins Coie Law Firm, whose lawyers represented Obama and Hillary.  Therein lies the real collusion and corruption, but all is brushed aside to accommodate the targeting of our President, and the man responsible for allowing this to happen is Sessions.

Where is Trey Gowdy, Chairman of the Oversight Committee?  Gowdy is slow like a frog walkin’ regarding his investigation into the corruption in the DOJ and FBI, and it is apparent that he’s a fan of Mueller.  In a previous article I listed just a few of Gowdy’s statements lauding Mueller.

The documents requested from the DOJ and the FBI are coming in at a glacial pace.  Out of the 1.2 million documents the inspector general has, the committee has received less than 10,000 documents.

Trey Gowdy is the guy who brought us the 11-hour Hillary Clinton Benghazi saga, where she simultaneously played hero, victim and martyr, and Trey got nothing, he’s all bark and no bite.

Why No Second Special Counsel

On 6 March 2018, House Judiciary Chairman Bob Goodlatte and Gowdy sent a blistering letter to Sessions and Rosenstein demanding a second special counsel to investigate Foreign Intelligence Surveillance Act (FISA) abuses.  They specifically mentioned the anti-Trump dossier used in the FISA to obtain a warrant to spy on Carter Page, but it hasn’t seemed to go anywhere.

AG Sessions praised Asst AG Rosenstein the same day Rosenstein was identified in the FISA memo as one of the individuals who signed off on the slanderous FISA memo to spy on President Trump.

Gowdy and Goodlatte wrote that because the “decisions of both former and current Department of Justice and FBI officials are at issue,” they do not believe the DOJ is “capable” of investigating the “fact patterns in a fashion likely to garner public confidence.”

Rosenstein will never let this happen since his signature is on the FISA application which approved spying on Carter Page!  He doesn’t want to be investigated by a special counsel. 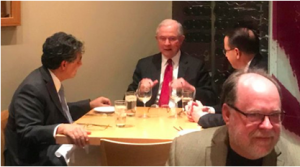 Sessions told reporters that Inspector General Horowitz would investigate Obama’s FISA abuses!  But, IG Horowitz doesn’t have prosecutorial power and Sessions knows that.  The very day that Trump publicly and privately was raging about Sessions, the three top ranking officials in the Justice Department appeared together at dinner in a show of solidarity.

Deputy FBI Dir. Andrew McCabe was forced out because he was involved in an attempted coup against the United States and may face charges once the evidence is produced in an Inspector General report due out anytime now.

The FBI’s Office of Professional Responsibility has recommended that McCabe be fired, but there has been no decision by Sessions to terminate the dirty cop on his staff and deny him the ill-gotten benefits of a pension. Chris Farrell says, “McCabe should be indicted, held in suspended animation on administrative leave until he can be indicted. He should not collect a penny of retirement, he shouldn’t be given lunch money.”  If Sessions does nothing and allows McCabe to continue to feed off of the American people then he’s again failing the trust of our President.  McCabe should have been fired the minute he was walked out the door.

We have no Attorney General, he’s been AWOL since he was signed in.  Who will keep the “Rule of Law” in this country if Sessions has recused himself from everything that needs prosecution and the Deputy AG is a close friend of Mueller whose only target is Trump?

It’s clear AG Sessions has no interest in getting to the truth about anything, just in presenting a facade that sort of looks like he’s not part of the deep state protecting the Obama-Clinton-Soros mobsters.

For a complete and thorough overview of this mess, read Joseph E. diGenova’s article, The Politicization of the FBI.  DiGenova would make a perfect U.S. Attorney General.