Home/July 2018, Opinions/The FBI Is Ripe With Corruption, Bias, And Massive Abuse Of Power

The FBI Is Ripe With Corruption, Bias, And Massive Abuse Of Power

Today the path to total dictatorship in the U.S. can be laid by strictly legal means … We have a well-organized political-action group in this country, determined to destroy our Constitution and establish a one-party state. It operates secretly, silently, continuously to transform our Government. This ruthless power-seeking elite is a disease of our century. This group is answerable neither to the President, the Congress, nor the courts. It is practically irremovable.  —Republican Senator William Jenner to Congress in 1954

Senator William Jenner was right and today we call what he described in 1954, the “Deep State.”  Since Donald J. Trump announced that he was a candidate for President of the United States, there has been a concerted effort to destroy him and all the people who surround him…that includes all of us “deplorables” who voted for him.

Why didn’t the Congressmen get together and each of them ask different questions of this agent?  Why did most of them repeat the same thing?  Why didn’t they hire an actual trial lawyer who knew how to cross examine a witness?  Why didn’t they give all their questions to Louie Gohmert who was a defense attorney in the Army and a state district judge for Texas’ 7th Judicial District for ten years?  He could have parsed them out and there would have been no repetitions. 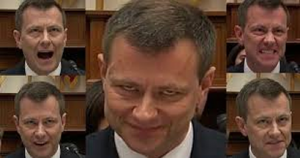 Peter Strzok and Rod Rosenstein have the same smug self-righteous, indignant, sarcastic, condescending, defiant and unapologetic looks on their faces when testifying before Congress.  Both are the personification of the “Deep State.”  They’re well trained in evasion and deception and were probably coached by Director Wray.

A veteran counterintelligence agent, Peter Strzok was assigned to both the investigation into Clinton’s personal email server and the special counsel’s probe into potential collusion between Trump officials and Russia during the election.  According to the text messages, Strzok was hesitant to join Mueller’s investigation because of his “gut sense” that there was “no big there there.”

Agent Strzok has an unfaithful relationship not only with his wife, but with the truth.  His public 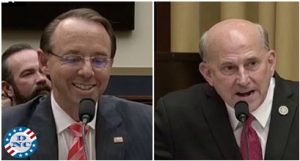 testimony in Congress was a sham.  Congress seemed to be all bark and no bite and many asked the same questions of this biased and subversive FBI agent, never really going for the jugular.  Rep. Goodlatte caused Strzok some awkward moments when he forced Strzok to read aloud his own text messages to his paramour, FBI attorney Lisa Page.

The only Congressman who really called Strzok on the carpet was Louie Gohmert who commented about how many times Strzok lied to his wife just as he was lying to Congress.  “When a husband is cheating on his wife he’s also lying to her. Why would that same man hesitate to lie under oath?”  Democrats went berserk over Gohmert’s comments.

Congressman Gohmert went further.  Nearly all of Hillary Clinton’s emails on her homebrew server (that’s 30,000) went to a foreign entity that wasn’t Russia.  When this was discovered by the Intelligence Community Inspector General (ICIG), IG Chuck McCullough sent his investigator Frank Ruckner and an attorney to notify Strzok along with three other people about the “anomaly.”  They did nothing.  Even IG Horowitz was called four times about this and never responded.  Link  Strzok remembers nothing!  What foreign entity received the classified information sent by Hillary’s home server?  Obama emailed her at her home, he knew.

Peter Strzok admitted to Congressman Jim Jordan that the phony Trump/Steele dossier came from Nellie Ohr at Fusion GPS and was funneled through the FBI by her and her husband.  She is the wife of Bruce Ohr the former U.S. associate deputy attorney general and former director of the Organized Crime Drug Enforcement Task Force in the FBI.  The FISA memo released to the public on February 2, 2018 alleges that Nellie Ohr was assisting “in the cultivation of” opposition research against Trump.

the Hillary Clinton campaign and the Democratic National Committee. Simpson was retained by the Washington Free Beacon to collect information on many of the Republican presidential candidates including Donald Trump and he hired Christopher Steele.  Simpson was also a reporter for Roll Call, where he broke stories on GOPAC, a political action committee headed by House Speaker Newt Gingrich.

Michael Goldfarb is chairman of the conservative think tank the Center for American Freedom, publishers of The Washington Free Beacon. He is a writer with the neoconservative The Weekly Standard owned by Rupert Murdoch and edited by Never Trumper and Bilderberger member, William Kristol.

Matthew Continetti, the editor of the Washington Free Beacon website, wrote in a letter that the Free Beacon hired Fusion GPS during the Republican primary to do research on Republican candidates. That research kicked off what became known as the “dossier” used to smear Donald Trump.

Continetti is the 36-year-old editor-in-chief. He started the website with Michael Goldfarb after marrying the daughter of Never-Trumper Bill Kristol. Goldfarb previously worked for Sen. John McCain (R-AZ).  And don’t forget John McCain’s involvement in trying to destroy Donald Trump with this phony Clinton created dossier which he actually walked to the FBI and gave to former Director Comey.

Perkins Coie Law Firm served as the cutout in order to funnel payments from the Democrat National Committee and the Hillary campaign to Christopher Steele.  Since April of 2016, Obama For America (OFA) has paid over $972,000 to Perkins Coie, records filed with the Federal Election Commission (FEC) show.  Perkins Coie hired Fusion GPS to compile a dossier of unsupported allegations against President Donald Trump.  Link

Attorney Marc Elias, who represented the Clinton campaign and the DNC at Perkins Coie, hired Fusion GPS in April 2016 to dig up damaging information on Trump. And we know Fusion GPS hired former British spy Christopher Steele who then got unverified information about Trump from officials in Russia. 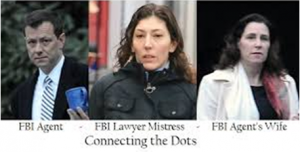 Former FBI attorney and Strzok paramour, Lisa Page had to be hunted down three times before she could be served with a subpoena to give a deposition to the same committees.  The fact that she defied the subpoena is getting far less attention than it deserves.  She was in contempt of Congress and as such why wasn’t one of the U.S. Marshalls sent to arrest her?

Only when she was threatened with contempt proceedings did Page agree to voluntarily appear for a private interview last Friday behind closed doors. (the public never gets to see these interviews).  Congressmen Matt Gaetz and Mark Meadows found her to be more forthcoming and credible than Strzok, and without Strzok’s smug attitude.

Page may yet testify at a public hearing before Congress. But why does she or any other government witnesses get to dictate the terms and timing of their own testimony?  How many of us who are not federal employees would dare refuse a subpoena from Congress? How many of us would even get away with it?  Jason Chaffetz blames AG Jeff Sessions, who refuses to prosecute those who ignore Congressional subpoenas.  In doing so, he weakens the ability of Congress to have proper oversight.

This Congressman is truly an embarrassment to the folks of Tennessee.  He actually said to Strzok that he deserved a purple heart for what he went through with questioning from Republicans.  The Purple Heart is awarded in the name of the President of the United States to any member of the Armed Forces of the United States who, while serving under competent authority in any capacity with one of the U.S. Armed Services after April 5, 1917, has been wounded or killed.  The Purple Heart, established in 1782, is America’s oldest military decoration. George Washington awarded the first one.

Strzok has never been in a battle like the men and women of our military, and Congressman Cohen should apologize not only to his fellow congressional members for an improper statement, but to every branch of the United States military.

If the truth be known, it is Peter Strzok who is the enemy combatant.  The real victim is the American public, which has lost trust and confidence in the FBI, an institution that has been counted on to keep us safe.  Why is he still employed by the DOJ?  Hopefully he will be fired from the FBI in coming weeks for his disgraceful conduct at the agency.

Strzok texted that he can “smell” Trump supporters and he thinks we’re a bunch of hillbillies, but this biased leftist hasn’t looked at the people who really voted for President Trump.  Strzok’s verbal vomit and text messages are the opposite of what is true…Americans of all flavors, colors and ethnicities, those highly educated and those with high school educations voted for Trump.  Why?  Because we saw what was happening to our nation and Trump’s words echoed our own thoughts.

This agent’s testimony before Congress was a political circus.  A recent WSJ article had it right.  President Trump needs to declassify a host of documents for Americans to learn the truth about what went on in 2016.  Other than a few nibbles of truth, Congress got nothing from this pompous, arrogant, and biased FBI agent.

The President needs to order both Justice and the FBI to declassify the relevant documents.  Those documents include the FISA applications, Woods procedures documents, the 302s, and the 1023s (which are the equivalent of 302s for counterintelligence and they document FBI debriefings with informants or sources).

Trump is probably being told he shouldn’t do this because he will be setting a bad precedent and will risk accusations that he is undermining Mueller’s investigation.  But at this point the American people distrust the entire law enforcement agency’s behavior during and after the 2016 presidential campaign. [Link]

If one of us little peons out here was charged in like manner, we’d be arrested and thrown in jail, but the DOJ/FBI keeps spitting on Congress and nothing happens to them.  When will Congress get a spine with chutzpah?  I’m tired of all the excuses; the top echelon of the DOJ needs to go, and that includes Sessions, Rosenstein, Wray, Barwick and a whole list of others.  When will Mueller be shut down and stop spending our tax dollars on this frivolous garbage, and when will Manafort get out of jail?

Folks, the writers for NewsWithViews, and the CEO of this website work day and night to bring you top notch information regarding what is happening in our country.  Please support our efforts…None of the writers for NewsWithViews are paid for what they do, we do it for love of America and our President who is trying to save this country from becoming a third world globalist nation. Tell your friends to sign up to get daily E-Mail alerts, and please help support us writers with your monthly donations so we can continue to bring you the latest news.  You can donate here.