Home/August 2017, Opinions/Trump And Sessions, Is Their Feud A Grand Charade?

Trump And Sessions, Is Their Feud A Grand Charade?

Behold, I send you forth as sheep in the midst of wolves: be ye therefore wise as serpents and harmless as doves.  —Matthew 10:16

Jeff Sessions, beloved by the Trump base and his colleagues, deserves better than the twitter trashing he’s getting from his boss, and our President should stop publicly attacking his Attorney General.  His staff told him to ease up and instead Trump increased his accusations.  Yet, I understand his frustration and exasperation, especially because Jeff Sessions was his first and very brave supporter, and Trump was counting on him to be in charge.

Should Sessions have recused himself?  Maybe not, but as he stated in a recent interview with Tucker Carlson, he made “the right decision,” despite the criticism he faces from President Trump.  Sessions said, “I’m confident I made the right decision. The decision is consistent with the rule of law. An attorney general who doesn’t follow the law is not very effective in leading the Department of Justice.”  Watch the four minute interview.

The core of our President’s discontent is the fact that despite any evidence whatsoever, Mueller is hiring dozens of Clinton/Obama supporters to delve into everything Trump has ever done, and any enemies Trump has will be subpoenaed to go for his throat.

There was never any Russian collusion, this has been stated time and again, even by Democrats, but the insanity continues and is even ramped up with the likes of Mueller.

When the NYTs interview with President Trump came out, I was talking with a good friend.  Both of us mentioned that something just didn’t smell right with the public attacks by our President against Sessions.  It actually looks as though our President wants Sessions to submit his resignation.  Who would he find who would be better than Sessions, especially on immigration?  There is no one!

Recently I talked to another good friend and mentioned that this squabble looked like misdirection.  Her response was, “Oh my gosh, you’re giving me chills!  I’ve been thinking the same thing.”

In my two previous articles, here and here, I’ve gone over the various statements and decisions of both the President and his AG.  But when you add it all up, there is just something wrong with the whole picture.

Trump may be a blue-collar billionaire and may not have the polish of lifelong deceitful establishment politicians, but he’s not classless.  If he were, he wouldn’t attract women as brilliant and beautiful as Melania, and he wouldn’t be as kind as he is to those we perceive as his enemies.  Yes, yes, I know, some women will do anything for money.

As for Jeff Sessions, he is a southern gentleman who would not stand for the abuse he’s been getting, yet he has not resigned.  After the Times article came out, Sessions spoke to the media with Rosenstein and McCabe at his side, two who IMHO should be canned, and said he’s not going anywhere, and he smiled throughout.  Good, we need him, and so does our President!

Rush Limbaugh’s show two days in a row, had callers who were suspicious of this quarrel between Trump and Sessions.  Limbaugh made it clear when he stated, “None of this Trump-Sessions stuff makes any sense. This kind of open criticism, if it’s designed to make Sessions resign, it isn’t working. And if the objective here is to get him to resign, it means Trump wants him gone. And if he wants him gone, he could just fire him. He’s not doing that.”

Maybe Trump thought that Sessions was more of a brawler than he has turned out to be, but Sessions will not do anything to dishonor the office.  His class and stature wouldn’t permit it.  Sessions holds the entire position as attorney general and the Department of Justice, in the highest regard, and he wouldn’t want to do anything himself that would sully its reputation or image.  Bottom line, he won’t.

One of Limbaugh’s callers said he thought that the President was doing a bit of “wag the dog,” while being a master at managing the media.  He believed that Trump is working on something and the feud is diverting the media’s attention.  And that may be true because from the moment Trump announced he was running for President, there has not been one day that he hasn’t been the top story in the MSM.

Another caller said he believed Trump was putting Sessions on a pedestal with the media by attacking him.  In the past, the media and Democrats have done everything to damage the reputation of our AG, but now they’re extolling his virtues simply because Trump has maligned Sessions in tweets and public statements.  The media always takes the opposite opinion of our President.

Rush has another theory that this was a giant political strategy to end all of this castigation of Sessions as a prelude to having him proclaimed filled with honor and integrity as he opens the leak investigation.  And that is now happening!

But there’s more.  Hillary, oh yeah, they want to go after her with a full-fledged investigation!  So, are they distracting the media in order to go after Hillary?  Limbaugh thinks it’s being structured and planned. He could be right.

He believes the public flaying of Sessions is strategic, designed to hide from the media and the Democrats what’s really going on.  Every day this lambasting of Sessions continues, with the image that Sessions isn’t doing anything Trump wants. But…behind the scenes, everybody’s on board to finally taking it to the Democrats and doing an investigation, but they know they can’t do that if everybody’s aware they’re doing it. [Link] So they’re hiding it behind the subterfuge of this feud.  Maybe…who knows.

While the feud is playing out in the media, the Department of Justice is accomplishing Trump’s agenda.  There has been a huge crack down on sanctuary cities, in fact Sessions upped the ante on sanctuary cities by declaring that any state not complying with requests concerning illegal immigrants held in local jails will lose federal grant money.  He’s had to tweak that a bit because of a Massachusetts Supreme Court ruling, so he changed the request to let local authorities tell ICE 48 hours in advance of a suspect’s release so their agents can come to the jail to interview him.

John McManus, President emeritus of the John Birch Society said, “Sanctuary cities constitute a thumbing of the nose at legitimate laws designed to thwart unlawful immigration. If the entire nation adopted sanctuary policy, there would soon be no nation, because, as history has shown, a nation without control of its borders soon ceases to be independent.”  Read the full story.

Think about it, Trump calls for an investigation into the leaks/leakers, and the very next day Sessions announces the FBI and DOJ are ramping up leak investigations and prosecuting the leakers, as well as slowing illegal immigration.  Sessions is doing all of this. They had to have this in the hopper for a good while.

Our AG is working with ICE and the Border Patrol, with great results. The number of illegal immigrants getting into the country has slowed way, way down. The number of illegal immigrants trying to get into the country is way, way down.  Jeff Sessions has his eye on the entire immigration policies the President proposed, and he’s following through.

In fact, California farmers are openly complaining in the LA Times that they can’t find enough people to pick the fruits and vegetables and they’re having to pay higher wages.  These are summer jobs that could go to American youngsters.  My own daughter actually spent two summers de-tasseling corn for Indiana farmers. 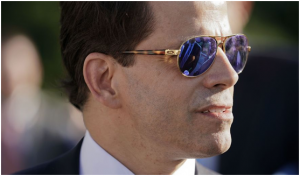 Anthony Scaramucci was the new Communications Director. He went on an expletive laden rant with the New Yorker’s Ryan Lizza, claiming Priebus was trying to sabotage him and keep him from getting the White House job.  As my friend Rick Wells stated, “There are many who would say that it is just what the doctor ordered for a White House being strangled by a web of establishment, Democrat, deep state and media operatives.”

Sean Spicer could have stayed, but he chose to resign, so he’s gone, and now so is Chief of Staff Reince Priebus, replaced by Director of Homeland Security, General John Kelly.  Spicer previously worked with Priebus at the RNC.

Now Scaramucci is out after only three weeks on the job because General Kelly didn’t want him as Communications Director.  Limbaugh stated on his July 31st show that the General told Trump he didn’t want Scaramucci as Communications Director. Limbaugh also stated that the General called former FBI Director Comey when he was fired to express his anger over how Trump handled it.  Kelly allegedly told Comey he was even considering resigning over how Trump treated the former FBI director. [Link]

If this is true, Trump should have shown General Kelly the door, not Scaramucci.

I’d love to see our President appoint General Michael T. Flynn to the Director’s job.  People are tweeting Trump to do just that!  Let the media eat cake!

Three officials have now claimed that FBI General Counsel James A. Baker (no relation to former Senator Baker or his son) is the “top suspect” in a criminal investigation into leaks of classified Department of Justice information to the media.  Baker is a close ally of former FBI Director, James Comey. [Link]

Sara Carter of Circa News is reporting that sources are telling her that NSA Director, H.R. McMaster has been communicating White House internal politics to Deep State Acting FBI Director Andy McCabe. Carter then implied that more White House shake-ups are perhaps on the horizon.

Is the feud a charade?  We don’t know, and we may never know, but the hatred by media, globalist establishment Democrat politicians, and many of the neo-con Republicans has created a phony investigation that never should have happened.  Our President has made promises to the American people, and those promises are what the globalists wish to destroy.  Let’s hope this discord between our President and AG Sessions is just that, a huge diversion, and behind the scenes they’re working together.