People always find lies more exciting and thrilling than the truth. Lies are like a virus that spreads easily around and contaminates the truth, making it impossible for people to separate actual facts from malicious rumors.

The duty of a true patriot is to protect his country from government.  —Thomas Paine

The most dangerous man to any government is the man who is able to think things out for himself, without regard to the prevailing superstitions and taboos.  Almost inevitably he comes to the conclusion that the government he lives under is dishonest, insane and intolerable.  —H.L. Mencken

Three-star General Michael Flynn never lied to anyone, not VP Pence and certainly not the FBI.  The FBI and Department of Justice misused their authority to try to entrap Flynn during an investigation that was utterly without factual merit or legal justification.  The special counsel pursued Flynn relentlessly, even though he had done nothing wrong.  Why? Because he was feared and hated by Obama and his Deep State minions in the DOJ. 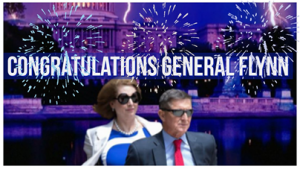 Michael Flynn never misrepresented his phone call to VP Pence.  Pence made the mistake of telling the press something he knew nothing about before talking to Mr. Flynn. The General took one for the team.

The Justice Department announced their decision May 7th to dismiss with prejudice (they cannot revisit it) the criminal case against General Flynn just days after exculpatory documents revealed the FBI tried to get him to lie or get him fired after Peter Strzok and Joe Pientka interviewed him on January 24, 2017 at the behest of former FBI Director, James Comey. Obama holdover and Acting Attorney General Sally Yates put the scheme in motion by sending the agents to the White House to interview Flynn. The FBI’s corrupt prosecutor, Brandon Van Grack, withdrew from the case the same day it was dismissed.

In February, the New York Times reported that AG Barr had installed a handful of outside prosecutors to broadly review the handling of other politically sensitive national-security cases in the U.S. attorney’s office in Washington. One of those prosecutors was U.S. Attorney Jeffrey Jensen.

The dismissal of the Flynn case was recommended by Jeffrey Jensen, U.S. attorney for the Eastern District of Missouri, who was appointed in January by AG Bill Barr to review the Michael Flynn case. Barr long ago could have dismissed this case, but then he would have had to explain the seditious behavior of the entire DOJ, which is still reportedly being investigated by Attorney John Durham.  He also could have demanded that Christopher Wray release the exculpatory evidence requested by Sidney Powell. He did neither. Bill Barr is a shrewd political strategist, he is not a lawman, he wants to preserve the institutions of the DOJ and FBI.  President Trump, unlike Barr, has no loyalty whatsoever to the intel machine.

“I concluded the proper and just course was to dismiss the case,” Jensen said in a May 7th statement released by the DOJ. “I briefed Attorney General Barr on my findings, advised him on these conclusions, and he agreed.”

“The Government has concluded that the interview of Mr. Flynn was untethered to, and unjustified by, the FBI’s counterintelligence investigation into Mr. Flynn—a no longer justifiably predicated investigation that the FBI had, in the Bureau’s own words, prepared to close because it had yielded an ‘absence of any derogatory information,’” said Timothy Shea, interim U.S. attorney for the District of Columbia, in his May 6th motion to dismiss. The FBI had “word-for-word” transcripts of the calls, and there was nothing in them “to indicate an inappropriate relationship between Mr. Flynn and a foreign power,” Shea said.

The DOJ needs to ask federal Judge Emmet Sullivan to vacate the general’s guilty plea in the wake of the document release.  All these materials should be made available either to the Senate Judiciary Committee or to whatever members of Congress are able to get them.

The intelligence community’s massive abuse of power against the incoming President and his National Security Advisor came right from the top. President Obama’s dislike of Gen. Flynn was well known, and for that reason Flynn became a target.  The top echelon of the FBI was involved according to text messages between FBI paramours Lisa Page and Peter Strzok.

The Comey team forced a meeting with Flynn, ignoring protocols and, in Comey’s own words, took advantage of a new, disorganized Trump administration. They had no legal basis for being in Flynn’s office and confronting him.  The politically motivated FBI is a real threat to our nation and to the rule of law.

It was Peter Strzok who kept the Flynn investigation open when it rightfully should have been closed after he and Joe Pientka stated that Michael Flynn had not lied when they deceptively interviewed him.

A handwritten note by FBI counterintelligence head Bill Priestap, in advance of the January 2017 interview with Flynn resulted in the retired general being charged with lying to federal agents: “What is our goal?” Priestap asked, “Truth/Admission or to get him to lie, so we can prosecute him or get him fired?” Strzok did the bidding of his superiors to strike the first blow to the Trump administration.

Documents show that Strzok and his paramour, Lisa Page massively edited the 302 reports to make them seem that Michael Flynn had lied.  Attorney Sidney Powell still does not have the original 302 reports.

We now know that the targeting of General Flynn (dubbed Crossfire Razor) was the beginning of the FBI’s “Crossfire Hurricane” operation against the Trump White House. Getting rid of General Flynn was the ultimate goal. The Obama holdovers knew that the General would investigate and eliminate the corruption within the intel community.

When Sidney Powell became Flynn’s attorney, she wrote a nine-page letter to Attorney General Barr outlining the entire case and asking for listed Brady/Giglio exculpatory evidence from the FBI, including the original 302 reports from the agents who had interviewed the General.  The requested documents were never forthcoming despite Judge Emmett Sullivan’s February 2018 standing order that they be furnished to defense.

The smug, arrogant and pompous FBI Director Wray was behind the suppression of stunning exculpatory evidence in General Flynn’scase.  The Federalist reported that FBI general counsel Dana Boente was also behind the effort to block the release of the Brady Material. Boente, along with James Comey and Rod Rosenstein signed off on the flawed FISA warrants. Quite obviously both Wray and Boente worked together to protect the Deep State swamp within the FBI.

What was most striking and shocking is how many also rejected any claim that the undisclosed evidence, at a minimum, violated Brady, the case requiring the government to turn over exculpatory information. Mark Zaid, the national security lawyer who was on the Ukraine whistleblower’s legal team, said that the FBI notes showed routine FBI interview tactics. National security lawyer Bradley P. Moss, a partner at Zaid’s firm, said that the FBI’s tactics were “largely consistent” with what’s been going on for the last five decades.

The mainstream media really should go back to 2016 and take another look at James Comey, but doubtful that will ever happen.

Most conservatives see FBI Director Wray as a younger copy of James Comey. His failure to give Brady materials to Michael Flynn’s defense attorneys was typical of actions similar to disgraced former Director Comey. Two weeks ago, Ken Matthews was guest hosting for Rush Limbaugh when he brought up the subject of Director Wray. A caller had mentioned that Wray needed to be replaced and Matthews had a great idea. He said that President Trump had communicated that he’d indeed “consider” rehiring Michael Flynn if he were exonerated. Now that the DOJ has dropped the case against him, the question about Flynn’s next career move is inescapable.  Matthews mentioned that the best man to clean up the intel agency was none other than three-star General Michael T. Flynn.

This thought has spread like wildfire, and gone viral on twitter. Additions have included Sidney Powell as the new Attorney General. With that combination, we’d see the rats scurrying for their holes, retiring to be with their families, and moving out of country.

Of course, that particular scenario may be a pipe dream, but it’s one that thrills those of us who love both General Flynn and Sidney Powell. 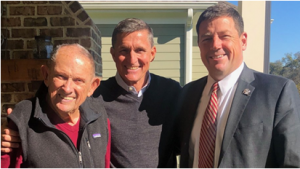 Service to America to General Flynn.  Six hundred people were in attendance and about that many conservatives of all ages had their pictures taken with General Mike.  The love for this veteran was so obvious, and I knew it was wonderful for him, his wife Lori, and their son Mike. It buoyed their spirits.

In January of this year, General Singlaub wrote a letter of support for Mike Flynn to AG Barr. It was shortly after this letter, that Bill Barr appointed U.S. Attorney Jeffrey Jensen to take a much closer look at the entire FBI and Mueller case against General Flynn.

General Mike Flynn and his wife Lori, and their entire family have been through the crucible, a horribly difficult trial and test.  And yet, never once did a smile fade from the face of General Mike and his beloved wife Lori.  Not once.  They faced this horror after Mike gave 33 years of his life to his beloved America, including five to actual combat, and the rest to Army intelligence, to being charged with the most vile and incomprehensible evil that could come against a true Christian patriot who loves his country. 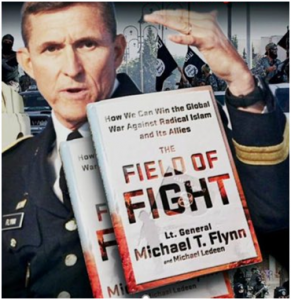 Do yourself a favor and read his magnificent book, Field of Fight, available on Amazon where Mike describes how to win the global war against radical Islam and its allies.

Never once did the Flynn family’s faith in God waiver.  They walked the walk; they knew God had them in His Hands and all would be well for those who love the Lord, no matter the outcome.

I want to see compensation, ten-fold for what he lost, but that’s my heart for this man and his wonderful family…a huge family of brothers and sisters who love each other unconditionally.  Mike Flynn will hopefully be rewarded here, but if not, in heaven, and that’s where this man stands far above those who accused him.

He has stood tall throughout this ordeal, with his bride and family beside him…and no matter what, he prevails because of his love and trust in the Lord. Isaiah 43:2 So does his brilliant attorney, Sidney Powell!

When you can, please help!

The Covid-19 destruction of America’s economy has destroyed so many businesses, I can’t begin to list the numbers who are suffering, but NewsWithViews is one of them.  The cost of maintaining conservative and truth telling websites is astronomical.  We need your help even if it’s only a few dollars in an envelope…to maintain truth coming to America’s readers.  Please help by donating here, and get your friends to sign up for daily emails…in that way, the advertising helps to keep us out of the red.  Thanks again!